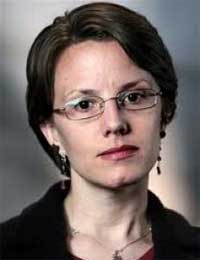 Had been living with Shane for a year in Damascus, Syria teaching English and learning Arabic.

Took a one week hiking holiday with Shane and friends, Josh Fattal and Shon Meckfessel, to Iraqi Kurdistan.

Arrested June 2009 and held in solitary confinement in Evin prison for 14 months. Released on bail in September 2010. Sarah lives in the USA.

Shane Bauer and Josh Fattal were finally released from prison on 21st September 2011.

"The whole world knows we are not spies"

On November 24th 2010, Chris Crowstaff from Safe World interviewed Sarah, two months after her release from Evin Prison in Iran.

The following are extracts from that interview.

The whole world knows we are not spies. I can't imagine any people in the world would willingly walk into a..willingly or knowingly walk across the border in broad daylight near a tourist site.. an unreasonable claim that I think no one gives real credit too.

And the truth is that something bad happened to us.

Something very unusual ..actually unprecedented.. in the area we were in... Northern Iraq...Kurdistan.

Its very hard for people to understand that this..that what people call The 'Other Iraq' - is a popular tourist destination

You can't understand our story unless you do your own research and get the background information.

We were there to hike, to learn about Kurdish culture.

We were living in Syria, Damascus for more than a year, Shane and I; we are peace activists.

I was learning Arabic and teaching; I am an English teacher, Shane was doing journalism, and Josh was our guest.

He was very much interested in spending time with us and sharing with us the incredible experience we were having in that region.

We had been writing about it and talking to him about it for some time... Shane for many many years.

We were all bridges for each other; Shane was my bridge and then Shane and I were Josh's bridge.

And as devastating and cruel as our detention in Iran is, its not going to change our orientation to the world

Our story is simply, at its very basis, a violation of International Law and Human Rights and a devastatingly unjust treatment of three innocent people and its also part of a 'larger context'.

Our story is part of this global drama between our country and Iran.

There seems to be some confusion about whether Shane was working during the holiday?

Well, Shane is a journalist and always ready for a story.
He did take some photos in Sulaymaniyah. It was just after the elections and there was a lot of celebrating in the streets.

Before we left for Ahmed Awa he uploaded some of them to a photographers' website.

To see if he could sell them.
But at the same time he also told us  'I won't be working, just hanging out with you guys'!

When you got arrested did Shane have his camera with him then?

We all had cameras, with many pictures on them of the waterfall, Sulaymaniyah etc.

This is the so-called 'sophisticated equipment' we had. Along with a cellphone and a plastic compass!

Maybe you can describe in more details the conditions they were in when you last saw them. Do they have their light on all the time. What's their cell like. How do they get to the bathroom. What sort of facilities do they have.

Shane and Josh are in the same size room that I was in - about 10ft x 15ft maybe.

And they are cramped in their together with their two beds taking up more than half the room.  A very little space to exercise.

They exercise side by side.

Each of them have maybe the size of a large beach towel.

And they only get out of their room for 40 minutes a day into the courtyard.

They jog around in circles and they have absolutely no contact with any other human beings except for guards and investigators.

The isolation in that prison is extremely unhealthy, mentally it takes a serious toll.

There is no stimulus, no contact, no information. You get completely out of touch -  you are in your own world.