Sarah Shourd - Waking Up the World 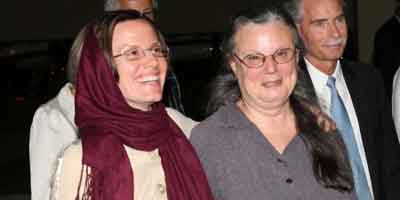 Almost every morning for the last ten days, I have been woken up by phone calls from the national media.

When the media is hassling a women's rights organisation, instead of the other way around, then there is at least some progress!

Why was she kept in prison so long? Did she get any medical treatment? Did she see her family? Did she see a lawyer? Did anyone speak out on her behalf?

The world is at last outraged about the injustice of Sarah Shourd's mistreatment in Iran.

It's ironic that Sarah gets more media attention now she's free than when she most needed it...  when she was in isolation in Evin Prison... When her mother Nora welcomed every interview she could get, to talk about Sarah's solitary confinement.

Every day now the media is talking about Sarah, Shane and Josh. It has been a challenge to keep our website updated with news of developments.

This is, however, perhaps the moment the US State Department has been dreading all along. That the world would wake up to the fact that Iran has been holding three US citizens as hostages for well over a year.

Shane and Josh have moved up to top of the US agenda with regard to State Department briefings.

It has taken 14 months of campaigning for these wrongly-imprisoned US citizens to become high on the US agenda. It should be no great surprise that the human rights abuses in general have not featured highly on the global agenda.

I think we can certainly conclude that media pressure and international campaigning can achieve a great deal. In the end, of course, Sarah's release was secured through diplomatic channels. But media and public pressure is needed to ensure these diplomatic channels are opened and that communication happens.

I guess it could be said that the Free Sarah Campaign has succeeded. In all honesty, though, we never expected Iran to release only Sarah. All three prisoners were detained at the same time and were held for the same political reason. There is no justification for Iran to hold onto Sarah's friends, Shane and Josh. Their continued detention is breaking international and Iranian law.

I'm sure Sarah will be saying something similar tomorrow when she makes her first press statement when she's back in New York. And the eyes of the world will be on her.

And, with regard to the bigger picture, let's do what we can now to make sure that human rights issues are top of the global agenda.

Let's get the message to the media that we are more interested in our common humanity than in politics and celebrity gossip.