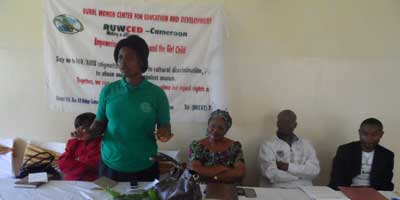 Women and Girls as Commodities

In rural communities where marriage for the most part is arranged between the parents of the bride and parents of the groom, life as a woman is extremely challenging - particularly when the marriage is a 'forced marriage'. Women and girls are regarded more as commodities than living humans who have wishes, likes and dislikes.

Unfortunately, the bitter pills of this commoditization is often swallowed by the women, be it in cases of divorce or in cases of widowhood, as will be read in the quote below from Mary – a widow, surviving 3rd wife, and mother of four.

As you may discover from Mary’s narration, her mother-in-law, a woman who endured some forms of violence does not see why Mary should not give in to violence and abuse. As a result, she even joins in enforcing the suffering and pain of Mary as a young widow.

“After my husband died, his nephew who is by custom his successor came and asked that he wanted to inherit me. I refused and said that I did not have any further energy to start giving birth to children again after my husband died.

I want to consolidate the energy that I still have and use it to care for these four orphans that my husband died and left for me to care for.

As I kept on refusing to be inherited, the man came, took the children’s birth certificates, chased me and the children out of the compound, locked the door, and left.

I was stranded with my kids and my mother in-law also closed her doors to us, saying that I was a stubborn woman. I had to take the children to my sister's and leave them there.

Since I did not have anything of my own, I went to town and started to work as a housemate where I was given 15,000 Franc Communauté Financière Africaine/FCFA ($30) a month. From this money, I sent 10,000FCFA ($20) to my sister to care for the children.

I became totally stranded because the small money that I earn as a housemate in town cannot really do much. This man [the successor] had even taken money from a man whom he promised to give my daughter to as a wife.

But I am bent that my daughter will better become a free girl than marry that man.”

These stories and more are a part and parcel of being a girl/woman in most rural Cameroonian communities.

While girls are being forced into these marriages, which are sometimes very abusive marriages, they do not know what legal protection the state offers through contracted marriages.

Basically, these forced marriages follow customary rules which end up being oppressive for the women who are either forced to reimburse a bride-price, which they did not take in the case of a divorce, or are chased away together with their children after the man dies.

In the Boyo-Division of the North West region of Cameroon, women and girls have served prison terms because they were unable to refund their bride-price.

The most-recent case that we are aware of happened in March 2014, where a woman who has three children, sold groundnuts beside the roadsides for a livelihood and was imprisoned because, after an unsuccessful forced marriage, she could not refund her bride price to her estranged husband.

Rural Women and Girls Learn About Their Rights 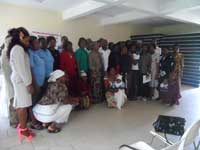 As a result of these challenges faced by women and girls in rural Cameroon, RuWCED (Rural Women Center for Education and Development) organized a workshop in the Boyo Division of the North West Region of Cameroon to educate and sensitize girls, women, and widows on the importance of contracting marriages, and the legal protections in contracted marriages.

The Delegate of Women Empowerment and the Protection of the Family, the mayor of the city council, womens rights activists, as well as some legal experts and traditional leaders were present at this workshop, which saw the participation of more than 50 rural women and girls from all over the region.

A participant shares her story and awaits advice:

Another participant, Mrs. Eunice, is just 20 years old and has been married for four years. She told RuWCED during this workshop that she got married at the age of 16 to a man she has never met before.

The marriage arrangement, according to her, was arranged between her father and the father of the man (now her husband) without her knowledge. By then, she was in Form Four preparing to write the national General Certificate Examination the following year.

She said that she had for long time desired to become a lawyer and the mother had been struggling all the time to pay her school fees and provide her other school needs.

She had this plan for her future, not knowing that the father was rather seeing her as a ‘commodity ‘. From her story, since she got married, the husband could not allow her to attend school and that was the end of her education.

Eunice is already a mother of three children after just four years of marriage.

This is just another story that speaks for itself, how girls have no control over their future in these rural communities where we are working.

Widow struggles to care for her children

Mrs. Kou, a 42 year-old widow with eight children, told us about the problem she has been facing since the death of her husband.

According to her, after the death of her husband, the husband’s brother became the successor, taking ownership and control of all the property she and her late husband had.

Devastatingly, since the death of her husband, this successor has been prohibited from paying the school fees of these orphans left behind to this woman, despite the fact that her brother-in-law has taken ownership of all that which belonged to her and her husband.

She told us that she has resorted into doing small business along the roadside, in order to take care of these children – two of whom, according to her, have already resorted to indiscriminate sexual behaviors because she cannot meet their basic needs.

Mrs. Kou explained this with tears running down her cheeks. And the last words she told us were:

“I wish my husband was here to see what has become of me and the children he left for me to take care of”.

Since our presence within these communities and after this workshop, RuWCED has been working with the village elders to help them understand the importance of valuing the girl child, rather than considering her as a commodity for sale to get quick money.

RuWCED is using the example of the country’s influential women to challenge parents to value their female children – who, if properly nurtured will help them in ways that a one-time bride-price cannot afford.

RuWCED is also embarking on its tri-package educational sponsorship program in which we give educational support, reproductive health education seminars, and livestock to each of our female orphan beneficiaries, so as to enable them go to school, prevent unwanted pregnancies and STIs [sexually transmitted infections], as well as rear the livestock to sustain their future educational needs.