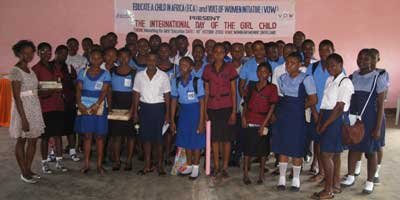 The Voice of Women Initiative (VOW) is a women-led initiative that empowers the voices of girls and women.

The Voice of Women Initiative was formed on the 19th November 2012. It was formed to be a platform that empowers the voices of women through advocacy and campaigns, training and capacity-building and carrying out community development projects to support women and girls in education, social entrepreneurship, alleviating violence against women and eradicating poverty, promoting environmental sustainability, peace, and social justice.

At the grassroots level, VOW Initiative works in Limbe, Cameroon.

Limbe is a small town in the South West Region of Cameroon. With a beautiful sea side and small villages surrounding the town, it is a town that has a high rate of young people – both students and non-students, a population that is vulnerable and a target population for VOW.

We also work with girls in the surrounding villages, carrying out our campaigns and other projects.

Women, girls, and children are the main beneficiaries of our activities. We work with girls undergoing harmful traditional practices like breast ironing, FGM (female genital mutilation), as well working with rape victims. We also work with widows, and women and young people in prisons and also sex workers.

We strive to promote justice in the areas where it is lacking.

Limbe is a beautiful small city with many rural villages around. The town is facing its own challenges such as early pregnancy, vulnerability to HIV, prostitution, lack of knowledge on reproductive health, poverty, bad traditional practices such as FGM, breast ironing and sexual abuse.

There is also the unfavorable gender role distribution and gender discrimination. In the last 10 years, the city has been severely threatened by floods and land slides.

Even though the literacy level should improve, the indigenous population are really becoming more and more aware of the importance of education. The challenge remains the finance, and innovating methods to create employment for young people especially young women who are disadvantaged.

These effects are suffered more by immigrant women and their children who are not just discriminated for their gender and lack of access to resources, but also inhibited by the law.

It is our hope that VOW can be able to do something about their situation in the nearest future.

Konda Delphine, Aya Chebbi, and Rose Wachuka are the founders. We met for the first time in Mindelo, Cape Verde for the 4th African University on Youth and Development. We were all participants of the 8th Africa-Europe Training Course.

During the training, we were attracted to each other based on our passion to empower the voices of women in the Africa-Europe process.

We felt the need to create a safe space for women to share their own stories and in their own way. Because we are all bloggers, we began to talk about the idea of starting a blog for women in Africa.

After the training course, we continued working on the idea until the 19th November, 2012, when we created the organization. We launched our website on 1stJanuary, 2013 and in a short while, we began receiving contributions not just from the people that we work with – but also from people across the world.

Even though we work with grassroots women, we also appreciate the tireless contributions of our vibrant correspondents whose input give VOW a global perspective.

At the grassroots level, VOW works with girls undergoing harmful traditional practices like breast ironing, FGM, as well working with rape victims. We also work with widows, and women and young people in prisons and also sex workers. 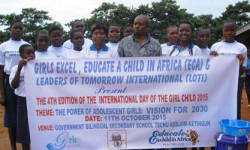 Girls Excel in Rural Cameroon - Sharing and Learning Together