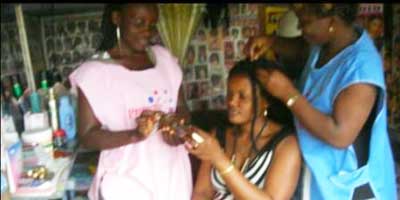 Hailing from a humble background, Ms. Josephine Mbasso Ezoy has always been passionate about education. But early in life the chapter closed: at 14, she lost her father, and she was given for marriage.

With her basic education, Ms. Ezoy thought she would find solace in marriage, and maybe pursue her studies further. Unfortunately she was wrong. After more than eight years in an abusive marriage, she finally separated from her husband in 1999.

Although many years had passed, Ms. Ezoy held on to the dream she had had since she was a girl. She became a student and more.

Popularly known as Tata, Ms. Ezoy, now 35, is also a mum, business woman, ethical social entrepreneur, and a professional hairstylist, whose saloon is also a center for activism on women's sexual and reproductive rights.

Today, she lives and works in Buea, which is the cosmopolitan capital city of the southwest region of Cameroon.

It was Ms. Ezoy’s determination and passion about education that led her to where she is now. 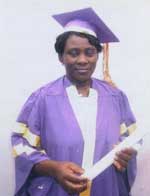 After her divorce, though moneyless, she didn’t feel disadvantaged. She embraced her situation and sought jobs as a restaurant receptionist and attendant.

Then later on she became a hostess (and usher) for some multimedia companies. All this movement from one job to the next lasted for some years.

By 2002, through her commitment and hard work, she succeeded in raising half a million FCFA (USD $1,250), which she used partly to sponsor her salon training.

Even as an apprentice hairstylist, Ms. Ezoy was very unique. Because of her commitment and passion in hairdressing she benefited from some special considerations, which trainers sometimes give their trainees.
She was granted the option to pay her fees in installments. In addition, she was also offered partial employment to compensate for the other parts of her practical and theoretical fees.

This privilege enabled Ms. Ezoy to use the other parts of her savings to buy some start-up equipment: a dryer, rollers, combs, salon chair, washing basin and living expenses inclusive.

By 2004, Ms. Ezoy opened her own salon. A year later she began accepting apprentices and co-workers, given preference to single moms, orphans and women from humble backgrounds.

“Though my saloon is for profit-making, I prefer to help those who don’t have anything than those who can afford their daily bread”, Ms. Ezoy said.

Two years after she opened her salon, Ezoy enrolled in a secondary school in Buea. Her enrollment came as a surprise to her peers, family(in particular her male siblings) and colleagues. Some saw her educational investment as a waste of time and resources.

Even her own 13-year-old son once said: “Mother your role is to stay at home, care for me, my brother and sister and not to go to school. Children go to school not mothers”.

And in response to her son who thought that a mother’s role was to stay home, she said: “Whenever your teachers invite me for PTA meetings and I quietly sit down, unable to make any contribution, nor even to write on the sheet of papers that circulates in the hall, how do you feel about it? What do you think your friends and their family think of me?”

And in spite of the shocking reaction from her friends and family, Ms. Ezoy remained focused on her education. Also, despite all the myths and stereotypes about hairstylists and salons, she never felt dampened by them in becoming a professional and educated hairstylist.

Contrary to her family, peers and colleagues, Ms. Ezoy sees her education as an investment and not a waste of time and resources. She also believes that education is very essential to all hairstylists, besides just being creative and innovative in styling hair, there is also the aspect that brings inner joy to clients and lasting happiness to all sorts of community persons; educated or not. And this, according to Ms. Ezoy is beyond physically transforming people’s looks.

“We do our hair every day. Everybody loves looking good, beautiful…for beauty is love. It brings joy and peace of mind”, said Ms. Ezoy. “So, if I am not educated, how can I read and understand some hair products instruction that clients bring to me? How can I even satisfy my clients and make them happy?” she said. “You see I need to be educated”,

In 2009, once more, Ms. Ezoy made another giant transition by bringing activism into hairdressing salons when she stood as a volunteer and encouraged some of her colleagues to get involved in the three-year joint ACMS (Association Camerounaise Marketing Social) and UAFC (Universal Access to Female Condoms) Project that was brought to Buea.

Using her life experience as an example, Ms. Ezoy advised young women and her hair clients to not become victims like her, but to be in control over their sexual and reproductive rights. And thus becoming the author of their sexuality and personal relationship.

Her involvement with the ACMS-UAFC Project has enabled her to reach over 3,000 women (both clients and non-clients) on a one-on-one basis inside and outside of the salon. And she has given around 20 group educational talks on the correct and systematic use of female condoms, as well as on negotiation skills for a happy and intimate relationship.

Also, under her leadership as a hairstylist, she has trained up to 10 young women hairstylists and has employed over the years 12 co-workers.

In a conversation, one of her co-workers, Lizette, expressed contentment and a good working relationship with Ms. Ezoy. “Tata respects her agreement, unlike other employers I have worked with”.

Mirabel, a trainee, also made similar remarks on the work ethic and empathy demonstrated by Ms. Ezoy. Mirabel shared her experience as a single mom and how Ms. Ezoy understands her challenges. “As a single mother, I have to take my son to [and] from school and cook for him, besides fulfilling my duty here in the salon”.