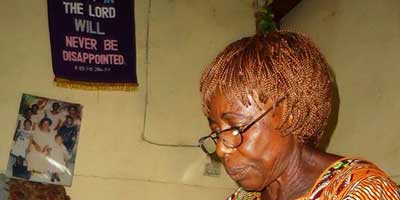 Fourth in the Know Her Story Series by Zoneziwoh

“They want to kill me because of my truth. They have taken away my land, my source of livelihood and imprisoned me. Yet, authorities are blind to see the injustice of this man because the man in question is a colonel...

They may suppress me. They minimize me as a woman. They see me as this small woman and want to use their position to shut me up!

But I will stand tall for the truth.

They may torture me and abuse me. But I won’t be silent”

I will speak so that the whole world knows what is in the heart of men in power. And let other women, who maybe having similar experience not give up their rights”.

An Advocate for Truth

Namondo Alice Ekema Wilson shared her grievances and the injustice she is experiencing, as I sat with her for an interview on the #KnowherStory series.

Now 69, Namondo Alice has spent over 10 years fighting for what is rightfully hers: an inherited 72 hectares of land, situated at BONADIKOMBO MILE FOUR (4), Limbe, southwest region of Cameroon. A land, she inherited from the grandfather around the 50s, while she was still a young girl.

“The land that I am suffering today is our great great great grandparents' land. A generational land founded by Lipanje La Molua, many hundred years ago,” Namondo said soberly.

At the time I visited Namondo at her home, she welcomed me inside her living room and as I got inside the house, the first thing I saw on the wall is an A5 paper pasted so neatly on the wall, with a writing bearing: “They that trust in the Lord will never be disappointed. Ps 125:1-10; 1 Peter 2:6”

Namondo therefore is just an advocate for truth, but one who believes in the omnipotence of the Lord’s doing.

It’s been over a year now when I last met Namondo Alice. I first saw her in May 2012, when she was remanded at the Buea Central Prison, where she served close to 10 months awaiting court trial.

As I Walked to Prison

“The children of late Yamche Sinju Boniface [one of the men who wanted Namondo off her inheritance], came to my house and told me that we have to go see the Senior State Council (PG) to resolve the land dispute. I don’t know the PG. However, I was anxious to get the chance to clear-off this matter.

They offered me a ride and behold, I was carried to prison instead.

The children drove with me to the gendarmerie here in Limbe. They deceived me by offering to give me a ride which I accepted. That was how I walked to prison. While there, my 30-year-old son, Mbome Ayuk joined me in the cell on January 31.

“Even as I speak to you”, Namondo added, “I have never seen the PG. I have never met with him anywhere but he ordered for my imprisonment”.

When I first visited Namondo – that is, in May 2012 in her prison cell, I was appalled at the state of things.

In a tiny one-block cell, with no permitted space even for an out-stretched arm, Namondo lived in company of 10 other female inmates – one of whom was HIV positive and another heavily pregnant.

Namondo, being the eldest of them all was commonly called “The grandma”. For the 10 months in prison, she lay on a thin 30 cm mattress on the floor as her bed; just few inches away from the door – and to the right above her head, was an old 14-inch TV with no flowing images.

No chairs or stool to sit on and in the heat of day, the fresh untilled floor made the absence of a fan less perilous.

Each morning, Namondo said: she engaged in her daily routine. At 6 am, she would get up to fetch water from the old rusted tap protruding from a concrete wall from the cell adjacent to her own. She would then carry the deformed metal bucket across a patchy lawn, to a dilapidated sink standing rectangular box.

This is both the toilet and bathroom.

The structure leaned dangerously to the left. To keep herself from the rusted sink edges, Namondo contorted her body to follow the skewed movement of the box. Decorated with spirogyra (a kind of green algae), fern, and moss, Namondo felt more uncomfortable here than in her thin mattress on the floor, beside the door.

One Meal a Day - Banana and Rice

Together with her fellow female inmates, Namondo would then clean their poorly ventilated and stuffy 11 x 4 m cell. Each day, they are served six slender fingers of banana and a cup (250ml) of rice per inmate; just one meal for a day. And 1.5 litre of cooking oil for the entire cell for a month.

But Namondo cared little for the taste of food. She would generally hand her share to a younger inmate. She said,

“The condition is deplorable, especially for women.”

Becoming the Heir of WOMBOMA Land: The Land of Which She’s Been Deprived

The first born was Ekona, who was the father of Namondo’s grandfather.

“My grandfather was called Ngale Ekona Lifongo La Molua”, she said, in explaining the genealogy of her paternal parents.

“In the 50s, my grandfather observed that the family size was shrinking and for fear to lose the family heritage, He 'adopted' and unmarried me from my husband, brought me back to the family compound, and made me the heir”

Just so you know, Namondo said in a strong and emotional voice:

“I didn’t go in somebody’s house or in the house of somebody to ask for inheritance. It was my grandfather, who handed his inheritance before passing away in 1973. A vast piece he too inherited from his parents and had leased out some portions of the land to Andreas Njanjo and Deodonne Kamo for a period of 30 and 50 years respectively, for the sum of £37, 10 shillings (at that time, the British one colonial shilling is almost equivalent to 15 frs which was big money then). Unfortunately, Andreas Njanjo died before his lease could expire. And neither did he finish paying his own money.

But his heir, Blaisius Njanjo succeeded him all the same – but neither did he pay his dad’s debt. Instead he used force to maintain ownership of the land after the expiration of his deceased father’s lease agreement”.

“They May Torture Me and Abuse Me. But I Won’t be Silent”

In 2005, Namondo got so vexed about the mischievousness of Blaisius Njanjo and thus filed a civil suit against him in the High Court of Fako Division and the judgment in default was delivered in Namondo’s favour.

In 2010, this time around, Blaisius filed an Appeal to the Supreme Court in Yaoundé, whose verdict or judgment is still pending till date.

And that is “the solution to all my problems”, Namondo said. “Once the verdict is passed, I will find rest from the long time suffering in the hands of these men”.

“I have lived in torture, humiliation from these men. I have wealth, but I am poor. I have been deprived from enjoying my inheritance. And above all, I have been projected as a liar.

People, who don’t know the truth, think I am a fraudster whereas the real fraudsters are somewhere living their lives, enjoying from my pain and misery. They took me to prison because they know my freedom is a threat to their mischievous act.

They want me dead so they can take over my wealth. But I have refused to be quiet.

They may suppress me. They minimize me as a woman. They see me as this small woman and want to use their position to shut me up!

But I will stand tall for the truth.

They may torture me and abuse me. But I won’t be silent”.

“I will speak so that the whole world knows what is in the heart of men in power. And let other women, who maybe having similar experience not give up their rights”.

They have seized everything from me.

The little part I use to work on is now taken away. I am now home living under the care of children. I can barely support myself.”

“Look at me” she turned to me and asked, “See how I look – I am all gone! I am not looking healthy because I don’t have rest”.

At the time I was doing this interview, Namondo Alice had just recovered from a one-month illness.

She was looking very weak and one could tell she needed much rest, but the local police probably didn’t realize that to stop harassing and arresting her at random.

“Namondo has been so much abused. Even [after] spending 10 months jail term – she is still undergoing harassment, prolonged detention and all sort of abused from these families and their friends”