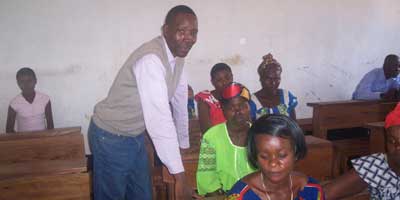 COFAPRI is an organisation of Congolese Women and girls, highly motivated and with very strong positive moral values to support and empower the females to speak out their woes and sufferings.

We promote human rights to the women and girls of DR Congo.

COFAPRI aims to give the women and the girls of the Democratic Republic of Congo DRC a voice in order to promote human rights, notably theirs in order to live in a safe country. In addition to this, they must be able to rely on their capacities as to set up income generating activities in order to better their families’ living conditions.

Women and girls in remote villages often need most help.

Mugisho & Bahati - co-founders of COFAPRICOFAPRI, Congolese Females Action for Promoting their Rights, is an initiative based in Bukavu, DRC and it is intended that is should extend countrywide. It is a Safe World for Women outreach Field Partner and collaborator as to empower women and girls to claim their rights and say NO to violence and all the forms of injustices they undergo.

The idea of founding this project was nurtured in November 2009 as to bring assistance to DRC illiterate village women and girls. The inspiration came from the contact we were having with Safe World for Women.

Women fear to speak out about the abuses they suffered.

The DRC is a big country located at the heart of Africa.

DRC has recently been dragged into a bloody war that lasted more than a decade.

The latter makes the women and girls suffer most, especially in the rural areas because they fear to speak out about the abuses that happened to them, due to some practices and traditions that forbid females to report on everything. This makes them suffer both physically and morally.

Being secretive therefore seems to cause them another kind of internal injure.

Women and girls who have been raped for instance cannot say it publically for fear to break the customs and even be repudiated by their husbands, thus be ridiculous in their respective communities.

In some households, there are also variety of abuses of women like being beaten by their husbands, raped by husbands, not being allowed to work outside, not giving them a floor to speak in public, and girls are not given chances like boys, etc.

Violating women’s rights is also another form of devilish violation of human rights; the background of an individual does affect them in the future.

All the above mentioned elements attracted our attention and thus we thought women and girls, educated or not, need our voice to empower them and so break the stigma and tell the world the abuses they undergo in the name of culture and tradition. Thus the creation of COFAPRI is to break the cycle of violence, the stigma and the silence and denounce these destructive practices.

We educate women and girls about protecting their rights.

COFAPRI also works for improving the Congolese females’ social development, welfare and integration through various activities. To make this effective, facts will be collected and researches conducted as to inform the world of the abuses the Congolese females endure. In this context, we aim at creating an Institute for Congolese Females Voicing their Rights, known as INCOFEVOR.

This Institute will educate not only the females about human rights but also the males because the latter are mostly the perpetrators of females’ abuses, though some females also abuse other females or sometimes females self abuse. The school will be at the service of the entire society; thus the youth and the old persons will be concerned. This Institute may extend to the Great Lakes Region as for empowering the women and girls of this area on human rights.

All women need to be empowered to break the cycle of violence.