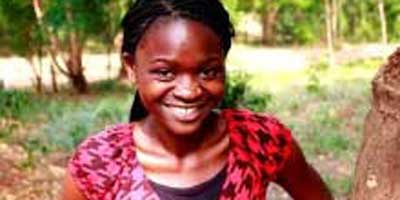 The organisation is going to see a cross-pollination of ideas from multiple stakeholders, which will result into serving the community better. Inadequate resources limit our ability to reach out to as many people as we would wish, but I look forward to working with all partners and stakeholders to mobilize more resources that will benefit the rural population of Malawi.

Between October 28th and November 2nd, Fabienne was in Malawi to conduct job interviews and select a project manager for the Green Manure project, design the new gender empowerment project, discuss budgets, and finalize the savings project (which officially ended in December 2013).

On 25th November, 2013, Nozgenji Bilima (pictured above) joined us as a project manager - so we are now an executive team composed of three people.

Hired for a period of two years, Nozgenji will be in charge of the Green Manure project, whose implementation officially began on 1st January, 2014.

Among other things, Nozgenji will use her strong personality to work with local government officials and encourage farmers in Chididi to plant and apply tithonia (a natural fertilizer) as well as use methods of conservation agriculture.

Valuable Volunteers - Assessing the Needs of the Youth 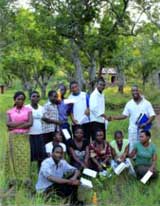 Youth needs assessmentWhen SURCOD was created, Joseph Nchiza was part of the executive team. After being away for a while, he has come back recently and is currently volunteering, almost full-time, with us.

Nchiza is a true asset to the organisation thanks to his open-mindedness and knowledge. He has been very active during a baseline study conducted in November 2013 and helping Nozgenji adapt to her new job.

In November, with the help of our international volunteer Chris Banning, we designed and conducted a baseline study to assess the needs of the youth in Chididi. This study aimed to help us identify and understand issues faced by the youth so that we can develop a well-conceived and appropriate a long-term project.

Finally, we distributed a simple survey form at both schools to get more quantitative data. Throughout the study, we have ensured gender parity. Results will be reported soon.

Women's Savings GroupDecember 2013 was the last month of our savings project. The photo on the left was taken during the yearly share out of 3 of the 22 active savings groups: Chimwemwe, Tiyendelimodzi and Msungwi. As a 15-member saving club, Chimwemwe managed to save MK 204,000.00 (about USD 483) in 2013.

The project, which officially ended on December 31, will be evaluated during the coming months. However, we will continue to monitor the existing groups and advocate for the creation of new groups.

Thousands More Birthing Kits to Save Mothers and Babies

In 2010, we became a partner of the Birthing Kit Foundation (Australia) (BKFA) and received our first delivery of 200 birthing kits, which were distributed to the hospitals and clinics at Nsanje and Lilongwe.

In November 2013, our partnership with BKFA was scaled up and we received 5,000 kits.

These will be distributed to more health centers and will, in turn, improve working conditions of midwives and contribute to reducing maternal mortality.

Plans for a Partner Organisation in Sweden

The picture on the left was taken at Chileka International Airport in Blantyre, where you can see Chris with his colleagues and friends Chisomo, Nozgenji, and myself - January.

SURCOD is very thankful for his work and is sad to see him leave.

However, Chris not only said that he would come back but also shared his plans to start an organisation in Sweden that would have SURCOD as a first partner!

We are looking forward to working with Chris again.

Chididi Youth CentreSURCOD wants to offer a safe and friendly environment where youngsters can have valuable and entertaining free-time and at the same time learn new things, open up their minds, obtain new skills, and express themselves freely.

If we are successful in the preparation, fund-raising and renovation phases, the youth center will open its doors in 2015.

If you are interested in this project or if you have suggestions, please contact us. We would love to hear from you.