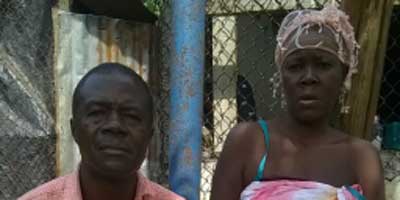 In January 2015, We Yone Child Foundation (WYCF) conducted an Ebola education programme in partnership with Fight For Peace (FFP), working with 10 community-­based organisations (CBOs), each operating in different slum communities in Freetown.

Two members from each CBO – 20 people in total, participated in community education training with an Ebola specialist from Connaught Hospital. In 10 teams of two, they spent three weeks carrying out a house-­to-­house baseline assessment, Ebola education, and post-­ education assessment programme.

The communities we reached included:

Participants came from these organisations:

This programme reached 7,000 people in 17 different communities in Freetown.

The data collected demonstrates that people’s understanding of Ebola, its causes, symptoms and effects, is generally good in the communities reached. [Percentages stated in all following data reflect the total of all the people in the communities we reached out to.

Community members feel that they are capable of protecting themselves and their families from Ebola and that if another community member  or family member does catch the virus, they know  how to behave regarding emergency procedures.

This data indicates that the Ebola education delivered by our programme had a marginal positive change on the level of understanding of Ebola, its causes, symptoms and effects, and appropriate behavior regarding these factors.

It is clear that 5-­10% of people in these communities require additional education and  training to raise them to an appropriate level of understanding on how Ebola is spread and what the appropriate behavior is to prevent the   spread of Ebola. It is crucial that  these  populations maintain a high state of awareness and diligence in order for the number of new Ebola cases to continue declining, and for Freetown in particular – and Sierra Leone in general, to eventually become Ebola-free.

Role of Government and  Major NGOs

The high level of understanding about Ebola in these communities may be tied to the largely positive perception the populations have of the government and large NGOs.

We acknowledge the limitations in the nature of these questions and the favourable answers – in particular, that the educators may have produced the answers based on the communities’ perception of them. Nonetheless, we acknowledge the central role of major institutions in fighting the Ebola crisis.

Based on the results of our investigation, we believe Ebola has had a vital effect on the reduction of the level of trust for traditional  methods of medicine in the populations surveyed.

It is widely reported that traditional healers contributed disproportionately to the spreading of Ebola through unhygienic and ineffective medicinal practices.

To begin with, we have two types of bitter colar, one is vegetable and the other is rum (alcohol) made by the Indian traders living in Sierra Leone. The Indian alcohol – bitter colar, it is a liquid form, people drink it. So it was regarded as a medicine to cure an Ebola-affected person.

Salt and hot water were used to wash the body all over, not just a specific area of the body. And it was supported by prayers as well (in Christians and Muslim ways).

A good number of people believe in these traditional medicines and they still go to these people (herbalists) for help not only for Ebola, but for other issues such as spiritual power against enemies (witchcraft), and for fortune.

These herbalists are still highly regarded in the communities not just for Ebola, but also for other issues as stated above.

There are multiple indications that people – in particular, children, are suffering from the secondary impacts of the Ebola crisis.

The data indicates that there are socio-­economic needs within these communities that have    been exacerbated as a result of the Ebola crisis. We believe these areas require further assessment in order to prepare a needs-­based response by the organisations working in these communities.

Crucially, this programme demonstrates  that CBOs can operate effectively together in the design, implementation and evaluation of coordinated training and assessment programmes.

Limitations to the Programme

WYCF feels confident that a few key recommendations can be made based on the results of the programme, despite the above limitations.

The additional cost relates to the costs incurred from minimizing the limitations mentioned above.

We request our funders, donors, and partners  to fund this programme now, in order that our work may be more effective in the future.