Victory in sight for revolution over female genital mutilation 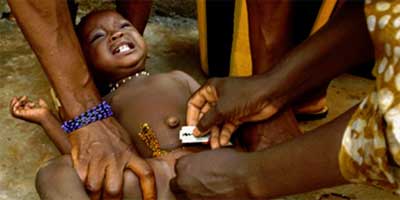 Victory in sight for revolution over female genital mutilation

Amid the horrors surrounding female genital mutilation (FGM) there is a quiet revolution, which experts hope could lead to the eradication of the practice.

Thousands of rural communities across Africa, which have practiced FGM for centuries, are starting to abandon the tradition in response to grass-roots education programmes. Analysts are even daring to talk of eradication within two generations – something that was unimaginable even five years ago.

Another 2,000 communities in countries including Sudan, Somalia and Egypt rejected the practice in 2011.

FGM is a harmful social convention in which part, or all, of a girl's external genitals are removed. Each year around three million girls – 8,000 a day – face FGM. An estimated 130 million girls and women are living with painful complications.

FGM occurs within 28 African countries, but also the Middle East, in Yemen, Oman and UAE, and parts of Asia including Malaysia. Girls are generally aged between five and 11; most girls are cut without anaesthetic using an unsterilised blade.

Tostan, a community-based human rights organisation, which originates in Senegal, has an FGM abandonment success rate of 77 per cent and is working in eight other African countries. The first community rejected the practice in 1997.

Traditionally, an uncut girl is considered unsuitable for marriage and maybe rejected by her community. This is why the community-based approach used by the NGO Tostan has succeeded where many others have failed. It involves whole communities, including the men, in rejecting the practice.

Julia Lalla-Maharajh, founder of UK charity Orchid, which supports Tostan, said: "The exponential rise in communities rejecting FGM means we can start to think about eradication in our lifetime. In 1899, 94 per cent of Chinese girls had their feet bound; by 1919 this was down to zero.

"We know that Tostan's approach works, so it is now a matter of resources."

Latest figures from the UN show that 8,000 communities have abandoned both FGM and forced marriage. This includes 5,315 in Senegal, 670 in Sudan, 600 in Guinea, and 92 in Djibouti.

In 2008, the UNFPA, the United Nations Fund for Population Activities, and UNICEF, the UN children's fund, asked members to donate $40m (£25.3m) to fund an initiative called Acceleration of the Abandonment of FGM. It has received only half of the money so far.

The Minister for International Development, Stephen O'Brien, witnessed first-hand the impact of FGM during a recent visit to Senegal. The UK currently funds projects in Senegal and Kenya. "Tostan's success has shown the world what can be done, and gives us confidence that even behaviour so deeply embedded in culture can be changed. It means the DfID is looking a lot more to help stamp out this millennia-old practise... and part of that will be supporting research to see how we can scale up what Tostan does without losing its community essence."

In the most extreme form of FGM, the entire external genitals are cut away. The wound left will be sewn up, with only a tiny hole left for menstrual blood and urine. Around the time of her wedding, a young woman will be cut open, just enough for penetrative sex. She is also further cut to give birth, then re-sewn.

5,315: The number of villages in Senegal that were known to use FGM – that have signed public declarations abandoning it.