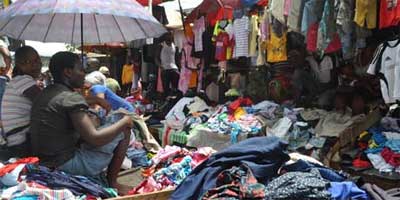 A third of all globally donated clothes end up in sub-Saharan Africa via wholesale rag houses, where they end up lining the streets or small boutiques such as this market at Katangua in Nigeria. | Photo: Monica Mark | Guardian

As a boy growing up in Sierra Leone, Kemoh Bah prized his Michael Jackson T-shirt. "I was the only one who had this kind of T-shirt in my village, and I felt like I was part of American culture," said Bah, dressed head-to-toe in clothes emblazoned with logos outside his roadside secondhand clothes shack in the capital, Freetown.

Nicknamed "junks" in Sierra Leone, hand-me-downs account for the majority of outfits in a country where seven out of 10 people live on less than $2 a day.

The industry has ballooned to $1bn in Africa since 1990. And yet the combination of western charity and African brand enthusiasm is not always a force for good. Quite apart from the ethical issue of donated goods becoming tradeable commodities on which middlemen can turn a profit, there is the threat to local textile markets to consider.

About a third of globally donated clothes make their way via wholesale rag houses to sub-Saharan Africa, where they end up lining the streets or filling small boutiques. Hawkers say Christmas time, when westerners flock to offload clothes to charity shops, brings in the biggest bales. The lucrative industry has even spawned fake charity clothes collectors in the west.

But critics say the billion-dollar trade risks swamping fragile domestic textiles markets, and 12 countries in Africa are among 31 globally that have now banned their import.

"The only way I survived was to start making Muslim women's clothes," said tailor Bema Sidibe from Ivory Coast, where around 20 tonnes of secondhand clothes flooded the country last year. In neighbouring Ghana, 10 times that amount arrive in an average year.

"Muslim women don't go for these western-influenced clothes and around traditional feast days you are guaranteed a few new outfits will be ordered," Sidibe said.

The influx of cheap clothes has heaped pressure on an industry already struggling to adapt to changing fashions amid patchy infrastructure. During his presidency in Ghana, John Kufuor introduced national "Friday wear day" to encourage citizens to wear traditional clothes made using the jewel-coloured wax fabrics associated with African garments.

Faux Markets and 'Bend Down' boutiques

For many though, the trade allows clothes to be bought and sold cheaply and provides desperately needed jobs.

Increasingly, taste as well as necessity has come into play. Picking through Kemoh's roadside cabin jammed between crumbling colonial buildings and corrugated-zinc shacks, bargain-hunter Fatima rifles through Gucci castoffs. "You can buy even cheaper Chinese ready-mades, but then you look like everybody else. Here I can find designer clothes no one else has," she said, sporting a rainbow-coloured mohican haircut.

A roaring trade continues across Africa, from Ghana's thriving "faux" markets to Nigeria's "bend down" boutiques.

Each month, using shipping containers supposedly full of cars, a network of traffickers, including Chidi Ugwe, smuggles around 1.5 tonnes of clothes to Nigeria's sprawling Katangua market, the largest flea market in the country.

"Most of the clothes land in smaller countries like Togo and Benin and then we get them to Nigeria. We call them flying goods, because they fly into the country without being seen," Ugwe, a former customs officer, said, while thousands of shoppers thronged through the narrow market streets.

So popular are the clothes in Katangua market that thousands of small-time traders also bribe border officials to bring in their own bales.

"We call our shops 'bend down' boutiques because we have so many clothes we just pour them on the floor and you just bend down and select," explained Mercy Azbuike, surrounded by piles of clothes overflowing from her wooden shack and piled into wheelbarrows outside.

"Even those selling clothes in boutiques [proper stores] are buying from us," said Azbuike, who also travels to neighbouring Benin twice a month to replenish her stock.

"It's the same boutique but you don't have to bend down so it's more expensive," she said, emptying out a Disney rucksack stuffed with children's pyjamas. Mothers with children elbowed past teenagers. "I cover myself but under my abaya [Muslim dress] I still want to wear nice, modern clothes," said Fatoumata, 18, as she paid $13 for sequinned Levi's jeans.

Not every seller is so successful. Emmanuel Odaibanga, who sells ski suits and jackets in a stifling shack, said business was slow. "It's easy to buy jackets [from smugglers], hard to sell them," he shrugged.