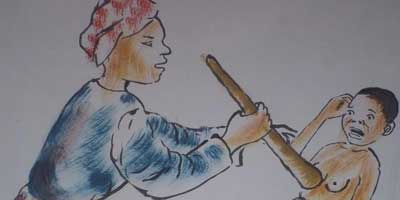 In the privacy of homes, behind closed kitchen and bedroom doors, pubescent girls in Cameroon are being tortured by their own mothers!

War has been waged against womankind: genitals are mutilated, breasts flattened, bodies battered, hair cut off for rituals,and minds deprived of education. There is no recompense for hard labor that lasts from dawn to dusk in fields and backyards. Women are working the most, yet benefiting the least. The hands that rock the cradle that rule the world have been described by many as a “necessary evil”.

The breast, a feminine symbol and the pride of womanhood has become a target.

The urge to protect their daughters from rape and premarital pregnancy has pushed mothers in Cameroon to a form of body mutilation.

Very few victims of breast ironing will acknowledge it.

Many claim never to have heard about it.

That was Lindsay’s reaction when I questioned her.

Looking at her chest, I noticed a deformity and so suspected she must have “been there”. I kept visiting her tailoring workshop and talking about the need for women to share their sad experiences with others, for solutions to be discussed. I told her about my personal fight with my grandma that freed me from being a victim of breast ironing, and about my cousin who dropped out of school as a result of the act.

One day I dared to ask Lindsay again if she had ever been subject to the act and she nodded with her eyes fixed on her toes. She related the experience she had at the age of 11:

“On my way back from school one evening, I noticed my underwear was wet. I hid myself in a nearby bush to find out if I had unconsciously urinated in my pants. It was blood, to my greatest surprise. I was so frightened and rushed to inform mama so we could go to the health centre. I thought I had been wounded by a nail that was hanging out of the bench on which I sat in class that day. I met mama slicing vegetable and chatting with my aunt and I began screaming right away, telling them I had a big wound in my private. Mama pulled me to the bathroom and asked me to show her the wound, when I did, she asked me if any boy had 'touched me' and I said no.

Holding her ear with her left hand and her waist with the right, she gave me a fierce warning, telling me if any man or boy touched me, from that day onwards, I would be pregnant and that will be the end of my education and the family would disown me. She gave me water to bathe and later brought a huge chunk of toilet tissue for me to put on my pants.

The next day she (mama) called me into the kitchen and examined my chest while shaking her head. She asked me to lie down on the floor while she used a hot stone to press my breasts, which had just begun sprouting. She instructed me never to tell anyone about what she was doing. The practice continued for over a year.

Unfortunately for mama when I turned 12 my breasts defied her attempts to suppress their growth and developed. However, my right breast is visibly much smaller than the left and there are black marks all over the area from burns I incurred during the process.”

According to statistics from United Nations population Fund, Lindsay is one of the 3.8million girls that are faced with the danger of Breast Ironing in Cameroon and is 1 out of every 4 girls in the country who is a victim of breast ironing.

An Excruciating Violation of Physical Integrity

The damaging effects of this form of body mutilation by far outweigh the reason behind the practice. Fertilized by the culture of silence, breast ironing has made it right up to this age of scientific advancement because many women have seen the benefits of educating their girl children and as such are ready to do anything to prevent them from teenage pregnancy and early marriage that would bring an end to their daughters` education.

According to the United Nations Population Fund the practice of breast ironing is more prevalent in the Christian and animist South of Cameroon (20-50%) than in the North, where only 10% of girls are affected.

This agonizing form of mutilation not only has negative health effects on the girls, but also has proven to be futile when it comes to deterring teenage sexual activity, since most of the girls end up being disfigured with teenage pregnancies.

Breast ironing can be a source of excruciating pains and violates a young girl’s physical integrity.

A 25-year-old victim says she feels embarrassed each time she is naked amongst her peers because her breast tissues are worn out 'like those of an old woman':

“The thing is very much alive everywhere, yet no one talks about it because it is done behind closed doors and kept as a secret between mothers and daughters. Not even the fathers are usually aware of these acts’’, she says.

Another victim of breast ironing, now an English teacher, says she grew up with a feeling of guilt and feeling bad about the sprouting of her breasts which happened as early as when she was 10. ”Mom tried to make me feel loved, but it never worked because I found her too cruel for my liking each time she began warming the pestle and stone to press my breasts. Despite the ironing, pressing and massaging with hot kitchen utensils, my breasts refused to flatten, making me an object of scorn amongst my mates whose chests were still flat”.

Medical experts say the developing tissues in the breasts are expanded and destroyed by heat during the ironing. Research by the United Nations Population Fund reveals that breast ironing exposes girls to numerous health problems such as abscesses, cysts, itching, and discharge of milk.

There can be permanent damage to milk ducts, infection, and dissymmetry of the breasts, cancer, breast infections, severe fever, tissue damage and even the complete disappearance of one or both breasts. Victims end up with marks, wrinkles and black spots on their breast.

Another victim says she developed breast cancer as a result of the mutilation and ended up losing one of her breasts in a surgery. She says her mother initially saw the cancer as a spell and resorted to more intense ironing sessions using a knife that had been heated on fire, to press them.

Like female genital mutilation, breast ironing violates the fundamental rights of women and young girls – the right to health, physical integrity,  and freedom from torture.

Worried Mothers Go to the Extreme

The rate of premarital pregnancy is on the rise in Cameroon (30% according to local health care workers) due to lack of sexual education. Many mothers have preferred to destroy or make their daughters’ breasts less attractive to males than to face the embarrassment of talking about sex with the girls.

With improved dietary habits in the country, girls are beginning to hit puberty as early as 9, and are therefore subject to the practice around the same age.

Worried and otherwise good–intentioned mothers have equally intensified the war against teenage sex by ironing, massaging, and pounding their breasts to flatten them. “So long as it will not kill the girl, I will prefer the breast to be deformed and have her go through her education without an unwanted pregnancy or the deadly HIV virus’’, states one of the mothers.

Most of the mothers say their intent is not to inflict pain on their daughters but to protect them from the taboo of teenage pregnancy. Where the mothers cannot stand the sight of their daughters in pain, there are often local women who serve as professional breast flatteners who exchange their services for palm oil and wood.

This discrete practice which occurs in the secrecy of bedrooms and closed kitchen doors can hardly be declared completely eradicated, since it is difficult to state with complete confidence what goes on in the privacy of people’s homes.

Killing the Culture of Silence

The effects of a recent nation-wide campaign by a non-governmental organisation, The Network of Aunties Association (RENATA), run by victims of the act, are yet to be established. The campaign that took place in 2006, involved radio and TV spots to discourage women from indulging in breast ironing.

Much needs to be done to kill the culture of silence, for so long as there is silence, no one can ever tell the harm done to little girls in the secrecy of homes.

According to gender consultant Dr. Awa Magdalene, such a practices rob girls of the much-needed self-confidence they need to assert themselves in society later on in life. It is therefore a dual enemy to women’s emancipation: itt not only violates the rights of women by inflicting pain, but also prevents them from accepting their bodies as normal human beings.

Think of a woman whose vagina is mutilated at the age of 9, whose breast were ironed at the age of 10, and who dropped out of school at the age of 12, due to psychological trauma from these practices, then forced into marriage at the age of 15, a mother of six at age 23, widowed at 30 ,and forced to undergo dehumanizing widowhood rituals; this woman will go through life regretting that she was born a woman and will never rejoice at the birth of a female in her family again giving victory to the war against “womankind”.

It is possible to teach women how to love and protect their bodies through counseling and a good education. Inflicting pain on girl children through breast ironing might instead force them to seek love away from the home, and by so doing, they could fall prey to the much disdained premarital sex.