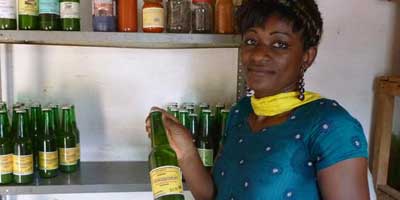 Many often dream of a job. Others create their own opportunities.

Standing before the sad cemeteries of rotting mangoes in the Bas-Congo region, Gratitude Ntonda Mandiangu decided to start a business.

Today she earns a living by giving the DRC’s wasted natural resources a second life.

“Passion fruit juice there, mango juice here, the ginger and orange juices at the back. And here the honey and mead used as sweeteners,” says Gratitude.

The din of clinking glass bottles fills the 25-square-metre factory where the young Congolese woman turns surplus fruit into delicious drinks. “We had to find a way to add value to this readily available raw material,” says the 25-year-old qualified food-processing technician.

Established in 2008, her microenterprise is called Ceptrapal, an acronym for the Centre for the Transformation of Local Food Products. Modest start-up funds from the European Union allowed her to purchase necessary equipment for the business. Today, Miss Gratitude, as she is called, employs a score of women from her native Kisantu to clean, cut, crush, sterilize and bottle the fruits. 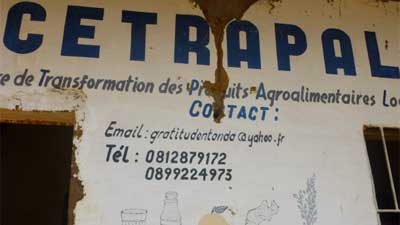 25-year-old Gratitude established the Centre for the Transformation of Local Food Products in 2008. | Photo: Hélène Michaud

At the start, efforts by some to discourage her only strengthened Gratitude’s determination to prove that women can be successful entrepreneurs. “I charged ahead,” she recalls.

Her parents, also in the agriculture industry, fully supported the start of her own company. A short walk from where Gratitude works, her mother manages a few fields. Does the convenient location open up opportunities for family business? Decidely not.

“She has to succeed on her own,” says her mother. Mixing family and business in this part of the world is a recipe for bankruptcy, she states succinctly.

A plan that makes sense

Surplus mangos, ginger and oranges are made into juice, bottled and sold around the region. | Photo: Hélène Michaud In the DRC, a lack of vehicles and poor road infrastructure render it almost impossible to get a large share of fruits to the markets and various retail points in time. As such, Gratitude’s business plan makes sense.

But how can such a small company survive?

Established multinationals already have efficient drink distribution networks that are cheaper than those any local ones use.

A few kilometres from Ceptrapal at the splendid Kisantu botanical garden, the outdoor café disappoints a customer’s request for locally made juice. They only serve the usual colas at this establishment, which prides itself on contributing to preservation of the Bas-Congo’s agricultural heritage.

Yet if adequately managed, the agricultural resources of this fertile region could meet the entire country’s food needs.

Gratitude Ntonda Mandiangu's mother manages fields near the bottling factory. | Photo: Hélène Michaud Like a number of international organizations and African governments, Gratitude believes the future of the DRC lies in agriculture.

However, because it is often perceived as hard work with no payoff, the industry does not appeal to Congolese youth.

But rather than the hoe-toting agriculture “of antiquity”, Gratitude thinks the more modern, mechanized practice should be promoted.

According to her: “Once Congolese people can eat well, everything falls into place.”

The entrepreneur dreams of collaborating with large international companies, as well as with her better-established competitors in West Africa. She wants to use them as models “and even surpass them”. A proud victory in itself, her Cetrapal juices are already sold at a supermarket a few hour’s drive from capital city Kinshasa and elsewhere in the DRC.

Still, Miss Gratitude hopes that her juices can one day quench the thirst of the whole continent and, why not, the rest of the word.