Child Rape in South Kivu, DR Congo - and Beyond 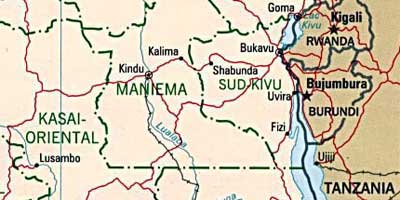 The deplorable reality of child rape has been on the rise in the South Kivu region of the Democratic Republic of the Congo (DRC) since May 2013. Heightened violence, critical conditions and two deaths have been reported in a recent press release by Panzi Hospital, located in Bukavu. The hospital has reported that children as young as one and a half years old have been raped, with this increased violence against children predominantly being witnessed in the Kabare and Mwenga districts of the central African nation. Three men are currently being held in connection with the rapes, with two of them having confessed, according to the statement by Panzi Hospital. The report also assured that mobile courts would be established without delay.

Unfortunately, child rape in the DRC is not a new phenomenon, though having fluctuated yet again in recent weeks. In 2008 alone, The UN Population Fund (UNFPA) registered nearly 16,000 new accounts of sexual violence against women and girls with 65 percent of the cases involving children—10 percent of these children estimated at being under the age of 10.  Tens of thousands of women in the DRC have become victims of sexual violence over the course of the past fifteen years.  Many have asserted the DRC to be one of the worst places in the world to be a woman or a child.  Beyond sexual violence, the experience of a child in the DRC is solemn with over 12 percent in the Eastern region never making it to their first birthday and tens of thousands having been subject to become child soldiers.

The very reality of child rape is nearly unfathomable when considering the already vulnerable state of a child facing the instability and terrors of conflict. Save The Children reports that a child often suffers more serious physical injuries than an adult; can be subject to abandonment by their families and can face grave social ostracization or have difficulty marrying. Children victims of rape may become susceptible to further abuse and suffer long lasting psychological effects that they will carry into adulthood. Further, youth victims of rape face increased risk of dropping out of school due to realities of ill-health, physical and psychological trauma, displacement and social stigma—further disempowering children of war. This new report by Save The Children also suggests that despite an earnest focus on community-based interventions and reintegration of victims, youth, especially girls may lack crucial socio-economic support in a post-war reality, which could result in turning to exploitative activities such as transactional sex.

The concern about child rape spans beyond the DRC, with children representing more than half of sexual violence victims worldwide. Despite this figure, child protection in humanitarian crises remains the least funded area of response according to Carolyn Miles of Save the Children. She stressed in a recent CNN article that the reality of war’s most vulnerable facing rape and sexual violence is not an isolated problem or “something happening in just one corner of the world, but instead a troubling pattern that we have seen in too many places.”

Regarding the recent report by Panzi Hopsital, the Panzi Foundation DRC’s Special Assistant and Advocacy Coordinator Olivier Vanderveeren, told Safe World for Women that there are no further updates at this time.

He assured that, “The survivors are receiving care in Panzi and their case files are in the hands of the investigative police and prosecution in an attempt to shed light on these crimes and hold perpetrators accountable.” He went on to say that, “besides individual suffering and trauma for the victims, their families and communities, these terrible crimes committed against children are beyond anyone’s common understanding and we can only make speculations as no one knows who is beyond these cases and what is the clear message to get from these acts of sexual terrorism.”

Recently, the United Nations arranged an intervention brigade with aim to disarm militia groups within the country, which should become operational by the end of next month. Resolution 2098 was unanimously adopted, authorizing the UN’s first ever offensive brigade.  Many organizations working on the ground are concerned for what is to come as outlined in an open letter to Ban-Ki Moon about the planned intervention and the overall severity of the humanitarian crisis in the DRC. The future for children of the DRC remains uncertain and of high-risk.

The American Society of International Law