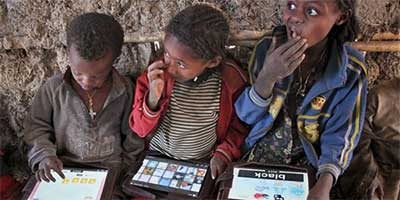 Children play with tablet computers given to them by the One Laptop Per Child project in the village of Wenchi, Ethiopia. | Photo: AP/Jason Straziuso

A project run by One Laptop Per Child, which gave tablets to the children in a poor village in Ehiopia, is proving to be a success. Now many kids can recite the English alphabet and spell words in English.

The goal is to find out whether children using today's new technology can teach themselves to read in places where no schools or teachers exist. The Massachusetts Institute of Technology researchers analyzing the project data say they're already startled.

"What I think has already happened is that the kids have already learned more than they would have in one year of kindergarten," said Matt Keller, who runs the Ethiopia program.

The fastest learner is 8-year-old Kelbesa Negusse, the first to turn on one of the Motorola Xoom tablets last February. Its camera was disabled to save memory, yet within weeks Kelbesa had figured out the tablet's workings and made the camera work.

He proclaimed himself a lion, a marker of accomplishment in Ethiopia.

On a recent sunny weekday, nine months into the project, the kids sat in a dark hut with a hay floor. At 3,380 meters (11,000) feet above sea level, the air at night here is chilly, and the youngsters coughed and wiped runny noses. Many were barefoot. But they all eagerly tapped and swiped away on their tablets.

The apps encouraged them to click on colors — green, red, yellow. "Awesome," one app said aloud. Kelbesa rearranged the letters HSROE into one of the many English animal names he knows. Then he spelled words on his own, tracing the English letters into his tablet in a thick red line.

"If we prove that kids can teach themselves how to read, and then read to learn, then the world is going to look at technology as a way to change the world's poorest and most remote kids," he said.

"We will have proven you can actually reach these kids and change the way that they think and look at the world. And this is the promise that this technology holds."

Maryanne Wolf, a Tufts University professor, studies the origins of reading and language learning and is a consultant to the One Laptop project. She was an early critic of the experiment in Ethiopia but was amazed by the disabled-camera incident.

"It's crazy. I can't do that. I couldn't hack into anything," she said. "But they learned. And the learning that's gone on, that's very impressive to me, the critic, because I did not assume they would gravitate toward the more literacy-oriented apps that they have."

Wenchi's 60 families grow potatoes and produce honey. None of the adults can read. They broadly support the laptop project and express amazement their children were lucky enough to be chosen.

"I think if you gave them food and water they would never leave the computer room," said Teka Kumula, who charges the tablets from a solar station built by One Laptop. "They would spend day and night here."

Kumula Misgana, 70, walked into the hut that One Laptop built to watch the kids. Three of them had started a hay fight. "I'm fascinated by the technology," Misgana said. "There are pictures of animals I didn't even know existed."

He added: "We are a bit jealous. Everyone would love this opportunity, but we are happy for the kids."

Kelbesa, the boy lion, said: "I prefer the computer over my friends because I learn things with the computer." Asked what English words he knows, he rattled off a barnyard: "Dog, donkey, horse, sheep, cow, pig, cat."

Kelbesa, one of four children, is being raised by his widowed mother, Abelbech Wagari, who dreams the tablet is his gateway to higher education.

While the adults appeared grateful for the One Laptop opportunity, they wished the village had a teacher.

Keller said that Nicholas Negroponte, the MIT pioneer in computer science who founded One Laptop, is designing a program for the 100 million children worldwide who don't get to attend school. Wolf said Negroponte wants to tap into children's "very extraordinary capacity to teach themselves," though she said she has no desire to see teachers replaced.

The goal of the project is to get kids to a stage called "deep reading," where they can read to learn. It won't be in Amharic, Ethiopia's first language, but English, which is widely seen as the ticket to higher paying jobs.

Keller and Wolf say they are only at the beginning of understanding the significance of how fast the kids of Wenchi have mastered the English ABCs. The experiment will be replicated in other villages in other countries, using more targeted apps.

One might wonder whether the children of Wenchi need good nutrition and warm clothes rather than a second language and no teacher — a question Wolf said has given her some sleepless nights.

She thinks she has arrived at an answer.

In remote regions of Africa and elsewhere, she said, "the mother who has one year of literacy has a far better chance to make sure her child can live to five years of age. They are savvier when it comes to medicine, to basic health, to economic development."

"So at 3 a.m. when I'm thinking, if I can do one thing ... using my particular knowledge, which is in reading and brain development and thinking — this is my shot; this is my contribution to the nutrition and health of a child."