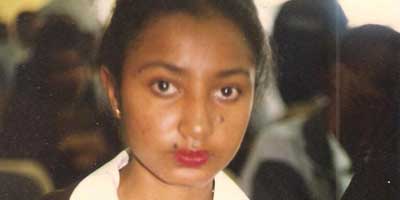 Reeyot is detained in Kality prison, along with other journalists.

'Ethiopian journalists Reeyot Alemu and Eskinder Nega have been locked up in Ethiopia's Kality prison since 2011 – simply for being journalists trying to hold their government accountable for its actions.
Although they have been honored with numerous prestigious journalism awards, the Ethiopian authorities continue to insist that Reeyot Alemu and Eskinder Nega are terrorists.
There is no doubt that their arrests and convictions were politically motivated and that their rights as journalists, who are constitutionally protected by freedom of the press, have been violated.' - International Women's Media Foundation.

'Eskinder Nega is serving an 18 year prison sentence for writing an article that posed the question: could an Arab Spring-like movement take place in Ethiopia? This is the eighth time in his 20 year career that he has been imprisoned simply for doing his job. If Eskinder's conviction is not quashed. His seven year old son will be an adult before he is released.' - MLDI fundraiser on Indie Voices

Back in 2005, Eskinder's wife and co-publisher of Satenaw, Serkalem Fasil, was arrested along with her husband, after her newspapers published articles critical of the Ethiopian government’s conduct in the parliamentary elections. On the day of her arrest, Fasil, who was pregnant, was severely beaten by police.

In June 2006, while still being held at Kaliti prison in Addis Ababa, Fasil gave birth to their son, Nafkot, who was premature and underweight due to inhumane conditions and lack of proper medical attention. She was forced to care for him in a cell infested with rats, cockroaches and fleas.

Eskinder Nega was moved from Kality prison to Karchele prison in August 2006 and was not allowed to see his son.

Fasil was released from prison in April 2007, following international pressure, and received a Courage in Journalism Award, the same year, from the IWMF.

Or you can also just follow the hashtag #Kality in the way you are most familiar with.

If you're not on Twitter, you can still watch the chat at the above link.