"Since there are a lot of injustices and oppressions in Ethiopia, I must reveal and oppose them in my articles." - Reeyot Alemu

Alemu taught English classes at an Addis high school. She gave part of her salary to her students from poor families.

On June 21, 2011, Alemu was seized from the high-school English class she taught, and placed under arrest, with reportedly no information about why she was being detained. Refusing offers of clemency in exchange for providing information on other journalists, was punished with nearly two weeks in solitary confinement.

Four days before her arrest, Alemu had written a scathing critique of the ruling political party’s fundraising methods for a national dam project, and had apparently drawn parallels between late Libyan despot Muammar Gaddafi and Ethiopia’s then-Prime Minister, Meles Zenawi.

A government spokesman announced at a press conference that Alemu was one of nine people suspected of organising terrorism. The terrorist group they were accused of abetting was unnamed and specific crimes were not cited.

According to the International Women's Media Foundation (IWMF), Alemu is one in a number of journalists who have been prosecuted under the vaguely worded and broad-reaching anti-terrorism laws passed by the Ethiopian legislature in 2009. The laws allow for the arrest of anyone thought to “encourage” parties labeled as terrorists.

Under this law, Alemu was sentenced to 14 years in prison and fined 33,000 birrs (about $1,850). Prior to her arrest, she made less than $100 per month at her teaching job and little more as a reporter. During her trial, government prosecutors presented articles Alemu had written criticizing the prime minister, as well as telephone conversations she had regarding peaceful protests, as evidence against her.

In August 2012, an appeals court subsequently reduced the 14-year prison sentence to 5 years and dropped most of the terrorism charges against her. 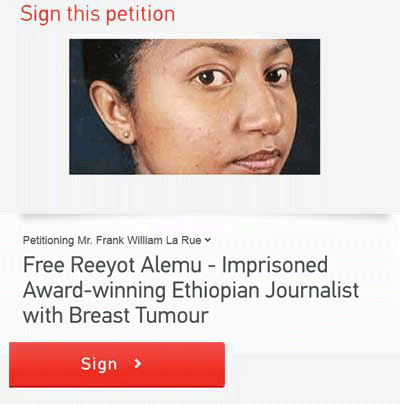 Oppression of Journalists in Ethiopia

The Ethiopian government has effectively limited media coverage to topics friendly to the ruling EPRDF (Ethiopian People’s Revolutionary Democratic Front), which holds more than 99% of seats in parliament. It has done this through charges of treason and terrorism levied against reporters and free media, public criticism of journalists and passage of laws that punish sources of information about opposition political parties and questions of human rights.

According to the IWMF in January 2013, Ethiopia remains a key U.S. ally in its battle against al-Shabaab, al-Qaeda’s Somalia affiliate, which some believe has resulted in an unduly lenient attitude towards Ethiopia’s human rights violations.

Her Breast is Bleeding

Reeyot has a tumour in one of her breasts. Her breast is bleeding but her condition is not being monitored.

Consequently, it is not known whether Reeyot's tumour is benign or malignant. Her health condition is of serious concern:

Women with malignant breast lumps who do not receive prompt treatment can lose a whole breast or significant amounts of breast tissue, or die.

Reeyot was held in pre-trial detention for three months, with no access to legal council. Some of the time she was held in solitary confinement.

The charges were vague and unspecific. Witnesses were anonymous.

Many of the journalistic articles quoted as 'evidence' were not actually written by Reeyot.

A documentary was shown on Ethiopian television, before the trial, profiling Reeyot as a terrorist.

Reeyot's father, Alemu Gobebo, is also her lawyer. Alemu Gobebo is not allowed access to her as a lawyer, only as her father.

In 2012, the International Women's Media Foundation (IWMF) bestowed a Courage in Journalism Award on Alemu in absentia for her “refusal to self-censor in a place where that practice in standard, and her unwillingness to apologize for truth-telling, even though contrition could win her freedom.”

At the ceremony, the presenters read a note from Alemu that had been smuggled out of prison. “For EPRDF [Ethiopia’s ruling party], journalists must be propaganda machines.”

“I believe that I must contribute something to bring a better future... Since there are a lot of injustices and oppressions in Ethiopia, I must reveal and oppose them in my articles.”  - Alemu had said in an earlier interview with the IWMF.

"While organizations such as the IWMF may not have the political clout to provide direct protection or effect instant change in situations like Alemu’s, the value of international attention should not be underestimated."  - International Women's Media Foundation.

The Importance of Support

“The support from the outside is what keeps you going, it’s more important than food and medicine," Martin Schibbye told the IWMF.

Martin Schibbye is a Swedish journalist. Martin was picked up together with colleague Johan Persson, after crossing the Somali-Ethiopian border illegally while reporting on ONLF rebels and the humanitarian situation in the closed Ogaden region. The 14-month-long diplomatic tug of war under the watchful eye of the international media ended when Schibbye and Persson were pardoned and released in September 2012 after they admitted guilt and were sentenced to eleven years in prison.

"International recognition such as the IWMF Courage in Journalism Award does in fact provide a certain level of protection. Prison guards and administrators will think twice because they know the world is watching.” - Martin Schibbye.

Even though their interactions were very limited due to a strict communication ban in Kaliti prison, Schibbye was deeply impressed with Alemu’s strong moral beliefs. The last time Schibbye saw Alemu was in August 2012, not long before he and Persson were released from prison.

“During the interrogation in Makelawi, Reeyot never broke down. She kept explaining to the police interrogators, some of them younger than her, why she was fighting for freedom of speech and democracy”, Schibbye remembers.

"This is an affront to freedom of expression."  - Claire Beston, Amnesty International’s Ethiopia researcher.

"Ethiopia has refused to comply with a decision by the U.N. special rapporteur on torture in the case of Reeyot." - Comittee to Protect Journalists.

"PEN American Center believes that Woubshet Taye, Reeyot Alemu, and Elias Kifle have been sentenced solely in relation to their peaceful exercise of their right to freedom of expression, in violation of Article 19 of the International Covenant on Civil and Political Rights and Article 9 of the African Charter on Human and People’s Rights, to which Ethiopia is a signatory. We therefore protest the harsh sentences handed down to them and call for the immediate and unconditional release of Taye and Alemu." - PEN American Center