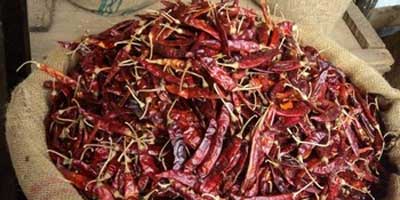 Every day used to be a struggle for Egifa Nambazo especially to just get a single meal for survival with her children. But now it is history because with pepper, she wiped all her tears of hunger and poverty.

Yes! When a dark curtain fell on Egifa Nambazo after her breadwinner, (husband) passed on leaving her with four children she was more like abandoned at cross roads without knowing the direction to take.

“I didn't know how I was going to feed them all. I had a very small house and no reliable source of income. I survived with the children by brewing and selling beer, as well as selling chilies from my garden,” said Nambazo adding that the money she made was too little for her to survive with the children.

“My main problem was that I didn't have a stable market for my chilies,"said Egifa now one of the most successful chili farmers in Phalombe District in Southern Malawi.

Her gate to success got opened after joining the National Association of Smallholder Farmers of Malawi (NASFAM).

Chilli vendors came into Egifa’s home area often, but she never knew when they would come and how much they would offer for her chilies.

It was when NASFAM came in 1997 that Egifa decided to register as a member of the organization which also became her turning point from poverty to prosperity.

“NASFAM empowered me and other farmers by giving us free chili seeds,” she said adding that she also bought seeds and fertilizer from NASFAM's farm supply shops and received farming advice from the organization.

“Furthermore, I didn't have to worry about market access anymore because I knew that the organization [NASFAM] was going to buy my product at a fair price,” said Egifa.

The first thing the field officer told her was that she should increase her production and look at farming as a business, Egifa therefore, expanded her production to 1.5 acres.

“I stopped brewing beer and became more serious about farming,” she said adding that as a farmer she could never take holiday hence she work in the garden from 5 a.m. to 11 a.m. every morning and from 2p.m. until 5 p.m. in the afternoon.

Little by little Egifa saved money and built a new big house, bought goats and chickens as well as three bikes and some kitchen utensils.

“I have even been able to send my children to school and also supporting some of my nieces and nephews who have been orphaned. I have taken control of my life and pleased with my success,” she said adding that by providing inputs and technical advice, NASFAM helped her to help herself.

"NASFAM has changed my life because I am now out of poverty as I am now able to have three good nutritious meals a day, live in a decent house and able to provide myself and my descendants needs," she said.

Egifa said where she felt she had problems in her farming business she contacts the field officer.

Her prosperity in her farming business even saw her fellow farmers in her area choosing her as their representative.

As an area representative she was trained in issues such as leadership and planning by NASFAM.

NASFAM is a member-owned, democratically governed and non-political organization providing business services to its smallholder farmer members. The organization has over 100, 000 members and channels their products to local and international markets, providing maximum returns to the farmer.

Through a variety of trainings and communications programs, the members are equipped with both agricultural and business skills, enabling them to produce and supply better crops and manage their farms in a commercially viable manner.

Nambazo’s success is clear evidence that if empowered, rural women can fight poverty and hunger and steer poor developing countries to the attainment of Millennium Development Goals (MDGs) aiming at reducing hunger and poverty by 2015 .

Malawi’s Gender Child and Community Development Minister Reen Kachere said one stumbling block to women empowerment in the country is their lack to access to resources to development themselves.

“For example, 70 percent of our agricultural production output is done by women but they benefit too little from it,” she said.

Women are over half the population

Kachere said women in Malawi [over half of the country’s over 13 million population] are contributing a lot in social-economic development at household and national level through informal trading in rural and urban areas through selling their produce in markets.

“Women are playing a big role in fight against hunger and poverty in this country. They are also shouldering the burden of caring for those infected and affected by HIV and AIDS, caring for orphans and providing support to households gripped by the pandemic,” she said.

However, Kachere said women in Malawi are contributing in social-economic development amid a lot of challenges.

“These include lack of access to credit, markets for their produce, land and farm equipment to produce food in the field, water and sustainable energy sources. They are also walking long distances to access health facilities and unable to access information on their rights, to know, claim and defend them,” she said.

Common Market for Eastern and Southern Africa (Comesa) Gender Director Emiliana Tembo said women in Malawi like in other countries within Comesa block if empowered have the potential to contribute to the economy.

Jacqueline Adhiambo-Oduol at the United Nations (UN) Division for the Advancement of Women (DAW) said poor developing countries in Africa are struggling to achieve social-economic development including eradicate pockets of hunger and poverty because women also majority of the population are denied full empowerment at all levels.

“So it’s like building castles in the air to expect societies on the continent to achieve sound social-economic development and eradicate poverty when women constituting a large proportion of the poor in Africa as elsewhere in the world continue being denied to grab opportunities,” she said adding that it requires more than just policy formulation to eradicate poverty in Africa.

“It’s high time that the continent stop just viewing women as mere objects of policy than instrumental to development. Women are agents of production, growth and change whose potential has been constrained in many countries by social and cultural norms underpinned by traditions,” said Oduol.

She added that African countries should also start appreciating women’s rights and gender equality if they are to root out hunger and poverty.

“Women and girls have for quiet along time faced discrimination in areas ranging from ownership of assets to access to social and economic services. This discrimination, coupled with the influence of traditional practices is a significant obstacle in the quest for women’s empowerment,” said Oduol.

She explained that women empowerment is an absolute necessity for any country ready to face the challenges of globalization, as reflected in the global integration of trade, finance, investment and use of new technology.

Former United States (US) president Bill Clinton said despite the fact that women have been making a lot of contributions in development on the planet they have been benefiting very little than men.

“Women perform 66 percent of the world’s work, and produce 50 percent of the food, yet earn only 10 percent of the income and own 1 percent of the property,” said Clinton adding, “Whether the issue is improving education in the developing world, or fighting global climate change, or addressing nearly any other challenge we face, empowering women is a critical part of the equation.”

On its part, the United Kingdom’s Department for International Development (DfID) research paper ‘The turning point on poverty: background paper on gender’ says women's economic empowerment matters for societies like those in Africa to achieve pro-poor growth.

“Higher female earnings and bargaining power translate into greater investment in children’s education, health and nutrition, which leads to economic growth in the long-term. Total agricultural outputs in Africa could increase by up to 20 percent if women’s access to agricultural inputs was equal to men’s,” says the agency.

The Food and Agriculture Organization (FAO) on the other hand says just closing the gender gap in agricultural inputs between men and women alone could lift 100 to 150 million people out of hunger on the globe.

“Women are major players in agriculture, making up the majority of farmers and farm laborers in many countries,” says the organization adding that women produce most of the food that is consumed locally and are responsible for household food security in many rural areas.

It discloses that the situation is not smooth for women in poor developing countries as compared to men since they [women] operate smaller farms, keep fewer livestock, typically of smaller breeds, and earn less from the livestock they do own yet have a greater overall workload that includes low-productivity activities like fetching water and firewood.

The organization also says such countries women have less access to innovation and productive assets and services, are much less likely to purchase inputs such as fertilizers, improved seeds and mechanical equipment, have weaker property rights and tenure security and reduced incentives to invest in their land.

The global food institution also says in such societies women are poorly represented in the leadership of rural organizations, particularly at regional and national level.

“… and if employed, [women] are more likely to be in part-time, seasonal and low-paying jobs, receive lower wages for the same work , even when they have the same experience and qualifications[like men],” says the organization adding that therefore, due to all these issues, the global village continues struggling to achieve sound social-economic development to eradicate poverty.

No wonder World Bank President Robert Zoellick’s warned that the world will not achieve MDGs including on hunger and poverty reduction by 2015 unless women are economically empowered on the globe.

“The economic empowerment of women is a prerequisite for sustainable development, pro-poor growth and the achievement of all the Millennium Development Goals (MDGs). Gender equality and empowered women are catalysts for multiplying development efforts,” he said.

Added Zoellick: “Investing in gender equality has the potential to yield highest returns of all development investments in society because unlike men, women usually invest a higher proportion of their earnings in their families and communities.”