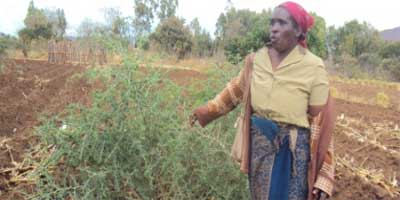 A Malawi farmer shows a fertiliser tree in her field. ALERTNET | Karen Sanje

Smallholder farmers struggling with climate change in Malawi are turning to trees to help their crops grow.

Many are intercropping trees with maize to provide moisture-preserving shade for the growing corn, while others bury tree leaves in the ground to make the soil more fertile and help retain moisture at planting time.

Research has found that such "fertiliser tree systems" can as much as double yields of maize, a staple crop here.

"These trees have the potential not only to enrich the soils but also to help keep moisture in my field even if the rains rarely come," said Killar Kawelama, a farmer in Balaka in southern Malawi.

He learned the technique from an agricultural field officer working for a climate change adaptation programme sponsored by the aid agency Oxfam UK.

Kawelama digs planting holes in his field between April and June each year and buries fresh or dry leaves in them from Gliricidia sepium trees that grow close to his house. The fast-growing trees, native to Mexico and Central America, grow well in a large range of conditions.

When the rains come around September and October, he opens part of each hole and plants his seeds.

The leaves decompose in the ground, and the resulting compost boosts the soil's fertility and traps moisture around the maize plants like a sponge, enabling the crop to grow more vigorously.

"Plants growing in such an environment are more likely to give a farmer a better yield as they don't wither easily because of (lack of) moisture," said Kufasi Shela, chief land resource conservation officer in the Ministry of Agriculture, Irrigation and Water Development.

Unlike Kawelama, Bettie Lungu of Mzimba in northern Malawi uses Tephrosia vogelii trees, which she plants in rows 1.5 metres (about five feet) apart.

The trees, which increase fertilising nitrogen in the soil, do not grow taller than the maize crop, so they do not stifle the growth of the maize, according to Mahara Nyirenda, an agriculture coordinator for the Development Fund of Norway.

"The leaves falling from the trees cover the ground. When it rains, this layer traps the raindrops, preventing them from accumulating into runoff. They also aid percolation into the soil," Nyirenda said.

When it is sunny, the tree canopies shade the ground and the fallen leaves help keep the moisture in the soil, he added

A recent paper by researchers from the World Agroforestry Centre reported that nearly 150,000 smallholder farmers in Malawi are using fertiliser tree systems. Several species of tree are used, though the most popular is Gliricidia sepium

"Things have changed a lot since we started using the practice of burying leaves from these trees," he said.

When Kawelama used chemical fertilisers, he would harvest 20 sacks of maize, each weighing 50 kg (110 lbs). Since switching to tree fertilisers his crop has declined slightly, to 18 sacks.

"But I am better off now because I am saving over 24,000 Malawian Kwacha (about $150) which I used to spend on chemical fertilisers," he explained.