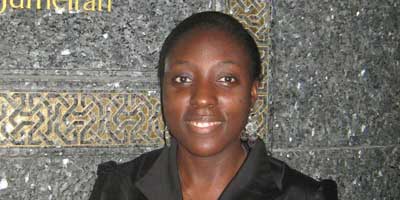 Adepeju Mabadeje, a Nigerian lawyer, is Founder, President and National Coordinator of the Brown Button Foundation, set up to help curb the high mortality rates in Nigeria, promote women’s sexual and reproductive rights and helping them to make informed choices.

"As you read this, a woman somewhere is dying at childbirth due to the lack of facilities to support her, a woman died last night and her family is mourning because we are yet to reach her with help, a teenage girl is contemplating suicide or an illegal abortion with quacks because information about contraceptives is not yet available to her, such is the pain I live with daily and the driving force of what I do."
Adepeju Mabadeje

Chris Crowstaff, founder of Safe World for Women, asks Adepeju Mabedeje about her work as a lawyer and founder of the Brown Button Foundation:

Are there some regions which have much better hospital/health facilities than others? And why do you think this is the case? Do the hospital facilities in rural regions tend to be worse than in the cities?

The division in Nigeria is not amongst regions but amongst cities and rural areas. Major cities like Lagos, Ibadan, Abuja and Kaduna etc all have relatively better facilities than rural areas.

A lot of these differences can be attributed to the population, development and literacy level of the cities as well as opportunities existing in the locations. Illiteracy of the populace and huge corruption on the part of some administrators who focus on state capitals at the expense of developing other areas are responsible.

Is the Nigerian government (and regional councils) obliged by law to provide certain standards of facility and is it failing to meet these standards?

The Nigerian government is obliged by law to provide health facilities, health personnel as well as basic infrastructure for its citizens. Section 14 of the Nigerian constitution states clearly that the security and welfare of the people shall be the primary purpose of government. If standard facilities and infrastructures are not produced, how can the welfare of the people be taken care of? It is only a healthy nation that can be progressive economically. 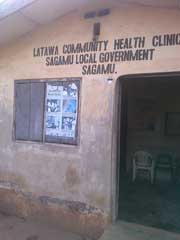 Community hospital with no delivery facilities

As a matter of fact, the democracy being practiced in Nigeria makes and holds a lot of government officers and parastatals (state-owned organisations) responsible for the well being of its citizens as well as basic infrastructures. There is the local government, the state government, the federal government which gets millions of naira in allocation to develop infrastructure and basic facilities. There is also the state house of assembly representative, the federal house of representative and the senate which receives millions in the name of constituency allowance to ensure developments at their local stations.

The present infrastructures and amenities especially in rural areas are therefore appalling to say the least.

More often than not, women walk miles in order to reach health centres and receive skilled healthcare. Some health centres by their looks can only be described as death centres with no mosquito nets, no mattress, no water or electricity.

Patients are required to fetch their water before treatment and to purchase petrol for the hospital’s generator if they are ‘unfortunate’ enough to require health care at night. If standard facilities are not provided, how can the right to life of citizens be protected?

How does the lack of delivery facilities and the poor standards in some hospitals impact women's rights and particularly women's health rights and reproductive health rights?

Lack of delivery facilities and poor standard in some hospital means that maternal and child mortality will be on the increase in Nigeria. UNICEF reports have indicated that only 39% of women in Nigeria receive skilled delivery assistance. Although the government has established a midwife scheme to boost skilled workers, the problem of infrastructure is yet to be addressed. 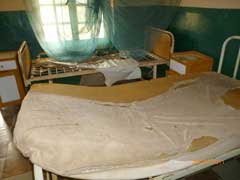 Lying-in-ward for pregnant women in a public hospital in Ogun State.

Due to this poor infrastructure and the lack of incentives to stay in rural areas, the midwives record low morale and eventually leave their duty posts leaving women to their fate. As an alternative to save their lives, the rural women resort to the use of traditional birth attendants (TBAs) who are largely unskilled because they are certain that with them they will not need to fetch water, buy petrol and worry about the lack mattress or bed sheet.

With the traditional birth attendants however, life is a gamble for most of their patients. They do not administer any drugs to their patients. Instead, they use only herbs, and consult with their 'spiritual worlds' in seeking solutions to problems. They have no capacity to stop postpartum haemorrhage, have no idea how to deal with prolonged labour, administer immunization on babies or give in depth advice on family planning as most of them are largely illiterates. The lack of facilities has built a sort of ‘trust’ in TBAs in the minds of many rural women.

This spiritual side of the TBAs have also attracted more women to them as they now view childbirth as a spiritual exercise with the gods determining who dies and who survives.

Does hospital treatment have to be paid for? And the stay in hospital?

In most states in Nigeria, government has declared free health services for children, pregnant women and the aged, however, they often do not provide and ensure the supply of basic facilities. So it is not uncommon to see patients buy water, syringe and needle, drugs, mosquito nets, bandage, cotton wool and other basic needs. Stays in the hospital are usually paid for.

Why do you think there is such a low standard of health care when Nigeria is one of the largest producers of oil in the world and there is potentially so much wealth?

Nigeria, though oil rich, is a country where corruption thrives with impunity and public officials enjoy immunity from prosecution even in the face of obvious greed and economic crimes. Prosecution of public officials for corruption is usually poor as many see the few cases prosecuted as witch-hunting.

Accountability is also an issue as it is not a strange occurrence to find a particular development contract awarded more than three times with no result or an electrification project commissioned with the use of a generator. Even where contracts are performed, contractors cut corners and use sub-standard products which fall apart few weeks after being commissioned.

As a lawyer and advocate for women's health rights, in what ways are you able to help women to access services etc? Do you find that women are generally aware of their rights?

As a lawyer and advocate for women’s health rights, I meet with government representatives of rural communities and seek to draw their attention to ailing facilities in their constituencies. 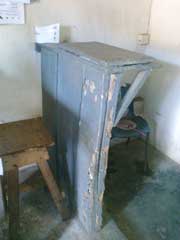 I do this by tracking them down at their offices and if they prove elusive, I contact them on social media and remind them they have a duty to the people.

I have come to realise that social media is a very effective tool for getting the attention of the representative sought as they cherish their image on social media.

I also teach women about their rights to reproductive health and assist them to get the information required by arranging for nurses to advise on women’s health and child nutrition at the TBA homes as well as organise seminars and training for TBAs to improve referral services.

In what ways do you feel blocked from helping? What are the challenges?

Most times, help does not reach many women due to challenges in funding or reaches them too late. 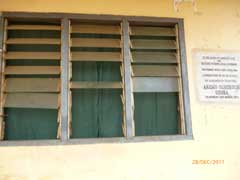 As you read this, a woman somewhere is dying at childbirth due to the lack of facilities to support her, a woman died last night and her family is mourning because we are yet to reach her with help, a teenage girl is contemplating suicide or an illegal abortion with quacks because information about contraceptives is not yet available to her, such is the pain I live with daily and the driving force of what I do.

In what ways is Brown Button able to help? And again what are the challenges?

My organisation, the Brown Button Foundation, identifies rural areas where basic health facilities need to be provided or developed. 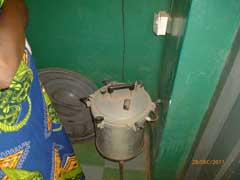 We have seen hospitals without delivery facilities and some others without water or electricity. The lack of these basic amenities discourages a lot of women from seeking skilled care. We also realise that without these upgrade, the health centres will be unable to serve as competent referral centres for complications.

In dealing with the TBAs, we realise that traditional beliefs and reliance on them cannot be wished away, commanded to disappear by legislation or even training.

My organisation realises that in rural communities in the face of non-existing facilities, TBAs will, for a while, remain the first choice for women requiring health care. Thus, training TBAs to refer promptly and identify cases to accept and decline without addressing the issue of loss of income they will suffer will serve no useful purpose. This is where the power of 1,000 naira or about seven dollars comes to play.

One thousand naira or seven dollars is about the fee a woman incurs at the place of a traditional birth attendant so what I do, through my organisation is to establish a timely ‘refer and reward’ system. Under this system, TBAs are encouraged to refer in a timely manner; women who seek medical attention from them and are referred promptly, get a reward of seven dollars. The system has commenced in some local governments in Ogun state and is proving that seven dollars can save a woman’s life and determine who lives or die.

Like my personal challenge, the major challenge here is with funding. We are looking to extend this project to all other parts of Nigeria but funding is a major challenge although at the moment, we have managed to keep momentum and save several lives due to the good will of friends and families who see the sense in spending 7 dollars to save a life and preserve a future than spending same on chicken and chips.

What are your long term aims (vision) for your organisation?

The long term goals of my organisation are to bring to the barest minimum maternal mortality in Nigeria as well as to make reproductive right choices available to every woman.

No woman should die bringing forth life and the power of choice is true freedom for every woman.

What inspired you to set it up?

In 2011, I lost a friend at childbirth due to delay in getting skilled help. Her death puts a face behind every statistic on maternal death I have seen and was my turning point. It made me realize how dangerous childbirth has become and how our best are dying giving life. Realizing that it was my friend then and it could be me anytime if I do nothing about it, I decided to start my organization fighting maternal mortality.

Unlike many who see death at childbirth as destiny, I see myself and every woman as potential victims.

Finally, what changes do you feel are needed in Nigeria with regard to corruption and a more equal distribution of wealth, standard of living, access to services etc?

Government and its representatives must be accountable to the public; they must cut all government waste, focus on developing infrastructures, ensure respect for the rule of law and prosecute economic crimes against the people.

Surely, this is not too much to ask for.

Without all these, the feeling of dissatisfaction as witnessed in the January 9th to 16th Occupy Nigeria protest will continue to prevail in the hearts of the citizens, most of whom live on less than one dollar a day and work day and night to survive the harsh economic climate.