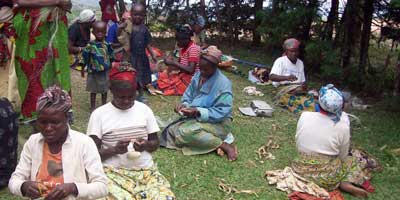 Three of our members from France travelled to Rwanda in June, and spent two weeks with the women from Abihuje, the group of women from Bwira that the project of the Centre Ubuntu works with. This was a rich experience of cultural exchange, as well as practical achievements.

We managed to install an electrical connection in Bwira, which will provide light in the communal space that members of Abihuje use for their various activities.

Other inhabitants of the region will also be able to charge their mobile phones, which will bring a small income to the women of Bwira.

Reed and stone barriers to limit damage caused by heavy rain to the fields have been erected and have already proved successful.

A new type of organic protein-rich seeds, donated by the Association Kokopelli, are being tested by six different groups, to see how they adapt to the soil. Gardening tools were also left in Bwira.

This was the second trip we organised to Bwira since the project started. Travelling this way is a great opportunity to create bonds, socialise, share stories and meals, and learn from each other.

Our main developments at the moment is maintaining and developing our bonds with the women from Abihuje, through responsible and engaged travel programmes, children sponsorship, and the twinning of the school in Bwira with a school in Cherveux (France).

We have also been increasing our membership and partnerships in France, where our charity is officially based.

We also have been participating in various events and markets, selling hand-made baskets produced by the women from Abihuje.

These events are also an opportunity raise awareness on the living conditions of women and children in Rwanda, and the population in general, as we work, as much as possible, with men as well.

Colette is one of the members of the group Abihuje.

She raises her two boys on her own. Now 19 and 17, they were only 2 years old and 7 days old when they became orphans.

Colette works hard in the fields to pay for their schooling. She built their house on her own.

The house only has a small room and Colette and the boys sleep on a mat placed on tree trunks, with a light piece of cloth that does not protect well from the cold.

After heavy rain, it is not unusual that the roof leaks inside. There is only a small wooden bench as other piece of furniture.

Colette says she is very happy to be part of Abihuje, which has allowed her to meet her neighbours. This time shared with the other women is the only time when she can rest and take care of herself.

She joined in the activity of making baskets, which provides her with another small income.

Colette says she is grateful for the clothing received from France. When our French members visited her house, she gave them a pumpkin, pineapple, eggs and carrots.

At the moment, the political situation is more or less stable. Heavy rain at times, and drought at others, as well as deforestation and over-population, are the major issues currently.