Moving Forward in South Africa: The Role of the Women’s Legal Centre 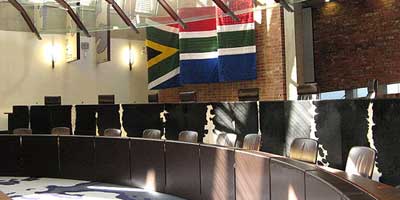 The Women’s Legal Centre (WLC), where I have interned since September this year, is a not-for-profit law centre in Cape Town, South Africa, set up in 1999 by a group of female lawyers determined to focus exclusively on women’s rights.

Since its inception, the WLC has been involved in litigation and law reform in five strategic areas: fair access to resources in relationships, freedom from violence, access to land and housing, access to fair labour practices, and access to health care.

The majority of cases that are taken on by the WLC are ‘impact cases’, i.e. those that are identified as likely to set an important precedent in terms of enhancing women’s rights and impacting on a large number of women.

For this reason, many are heard by the highest court in South Africa, the Constitutional Court.

The most recent to reach the Constitutional Court was Ngewu in November. In this case, the claimant challenged the constitutionality of her ex-husband’s employers’ rules governing the time frame for payment of the percentage of his pension owed to her under their divorce decree.

The court held that the claimant was entitled to her percentage at the time of divorce, and not, as the rules stated, when her ex-husband stopped working for his employer.

The precedent set by the Constitutional Court in Ngewu is the latest example of the WLC’s instigation of landmark litigation and life-changing court rulings.

In the case of Kylie, labour protections were secured for sex workers, and in Bhe, the primogeniture rules of the customary law of succession were successfully challenged in order to enable girls to inherit from their fathers for the first time.

Sexual Violence and Registration of Marriages

The calibre of work continues, as the tasks I have been assigned to as an intern demonstrate.

Since arriving, I have collected reports on sexual violence experienced by women in Cape Town’s largest township to be presented as evidence before the Commission of Inquiry into Police Inefficiency in Khayelitsha, researched and drafted a request to the African Court on Human and People’s Rights for an advisory opinion on the interpretation and implementation of Article 6(d) of the Maputo Protocol – which deals with registration of marriages, helped to write a letter to the National Director of Public Prosecutions in respect of a decision to drop an alleged rape case for lack of DNA evidence, and created a database detailing abuses perpetrated against sex workers by police officers in Cape Town.

The WLC frequently intervenes in court cases as amicus curiae, and was involved in the recent corrective rape case of Millicent Gaika, and the ‘teen kissing’ case where the Constitutional Court moved to decriminalise sexual contact between consenting minors.

Committed to Women Throughout South Africa

As well as conducting litigation, the WLC also holds workshops, monitors the passing of legislation liable to affect women, and makes proposals to government. It also runs legal clinics for women in Khayelitsha, a deprived township in the Cape Flats, 15 kilometres outside of the city centre.

The WLC is located in Cape Town, but committed to women living all over South Africa, and has made submissions to the government on controversial legislation impacting on women in the provinces, such as the Traditional Courts Bill and the Traditional Affairs Bill.

Implementation of the Bill of Rights

Before and after arriving at the WLC, the most frequent criticism I heard made of the South African legal system was the way that the Bill of Rights enshrined in the Constitution made guarantees that, in reality, the state could not provide for. The system is far from perfect, and an unforgiveable number of South Africans are not in receipt of human rights granted to them by the Constitution, especially positive rights, such as access to healthcare, education, food, and housing.

Just recently, mass protests were planned in the city by the Cape Town Informal Settlements Organization, aggrieved by their poor living conditions. Yet despite these highly significant problems, I would counter criticisms made of the Constitution in two ways.

Firstly, the Bill of Rights is not a meaningless document. If not a single successful legal challenge were to be made regarding the lack of implementation of its provisions, in my view, the affirmation it makes remains of cultural significance (the same goes for CEDAW, also – incorrectly – defamed as ineffectual).

Secondly, successful legal challenges have been and will continue to be made. The work of the WLC exemplifies the way that, with sufficient resources and excellent lawyers, the Constitution can be used to secure rights.

The Constitution was invoked by the WLC and referred to in the court’s judgment in all of the landmark cases referred to above.

In the recent case of Faro, the claimant was left destitute on the death of her husband due to the lack of regulation of Muslim marriages in South Africa. This in turn was owing to the longstanding failure of the government to enact the Muslim Marriages Bill. Not only was the claimant granted relief, but the Constitution was used to call the government to account for its delay: the High Court of the Western Cape ordered that the Minister for Justice and Constitutional Development file an affidavit by July 2014 setting out the progress made in respect of the enactment of the Bill.

I sat in on this case and listened as at one point, the judge intervened to remark that the respondent's son did not have access to an internationally-renowned NGO as the claimant had access to the WLC.

I thought this was a backhanded compliment, for while he was correct to say that there is no equivalent of the WLC for South African men (although there are of course organizations that provide help for both men and women, such as the Legal Resources Centre), it was disingenuous to overlook the deep-rooted injustices suffered by women who the WLC seeks to remedy, and explain its existence.

The Cape Town Informal Settlements Organization protests that despite the ostensible demolition of apartheid in 1994, they are still segregated – if not by race, then by their poverty. My limited experience in South Africa suggests that this is correct.

I would add that gender compounds the effects of poverty to create a unique vulnerability for disadvantaged black women in South Africa.

Tom Bingham, another judge, recognized that discrimination could be countenanced only where objective differences justify differentiation. The dramatically different treatment meted out to economically disadvantaged women justifies the continued existence of the WLC and its formidable presence in the South African legal world.

'The Women's Legal Centre is indebted to the influence of Nelson Mandela on the rights of South African women, and is saddened by his passing. Rest in peace Mandela.'