Statement from Edna Adan, Midwife in Somaliland, on Zero Tolerance to FGM 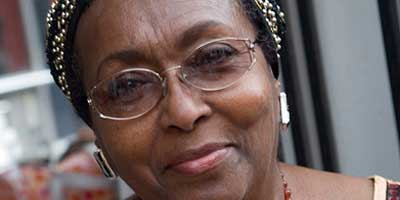 Today is International Day of Zero Tolerance to Female Genital Mutilation, which is a condition suffered by approximately 140 million women worldwide.

Edna Adan has always used her hospital and her notoriety to educate the people of Somaliland to reject this practice, which has extraordinarily deep roots in the culture throughout the Horn of Africa.

On this day, Edna has made the following statement.

"As a midwife, I have been delivering babies for 50 years, many of whom were being born to women who had undergone FGM. Witnessing the FGM-associated complications that many were suffering caused me to speak out against it in public in 1976 which at that time shocked my family and my people.

37 years later, and after so many resolutions have been passed to eradicate the practice, we sadly found that 97% of our women still suffered FGM as shown in the survey carried out on 4000 women at the Edna Adan Hospital between 2002 to 2006.

We are still looking for resources to study the prevalence of FGM and hope that the next survey/audit will reveal a reduction of FGM in our women, particularly after all the campaigns that we have held over the years."

About Edna Adan and the University Hospital 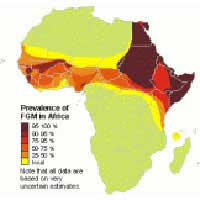 Prevalence of FGM in Africa. Map source: Edna Adan University HospitalIn March 1977, during the formation of the Somali Women’s Democratic Organization (SWDO),  Edna Adan Ismail was the first Somali person to publicly denounce FGM and pioneered the campaign for its eradication in Somalia and in Somaliland.

From that time she has campaigned against FGM at many important occasions, including during the WHO Seminar in Khartoum in 1979 on the Mental and Physical Complications of FGM; in 1980 during the Mid-Decade Conference for women in Copenhagen; in Lusaka in the same year; In Dakar in 1984 when she co-founded and was elected the Vice-President of the Inter-African Committee on Traditional Practices Affecting the Health of Women and Children; In 1986 in EMRO Egypt; 1987 in Addis Ababa and the lobbying of the Organization of African Unity. During the Beijing Women’s Conference in 1995 and between 1988 and 1997 when she tirelessly along with international colleagues, lobbied WHO/UNICEF and every Human Rights Organization.

That first gathering of SWDO was a golden opportunity to address the future leaders of women in their respective regions of the country and Edna Adan took full advantage of the opportunity. It was the first time the problem of FGM was spoken about in public in Somalia/Somaliland.

Thereafter Edna Adan lectured medical students at the University of Mogadishu as well as nursing students in various nursing schools in Asia and Africa. The subject was included in the curricula of these schools and future health professionals all finished their education with knowledge of the harmful effects of FGM. In the early 1980’s research into the physical, psychological and sociological aspects of FGM was carried out by the Somalia academy of arts and Sciences.

In 1988 the government campaigned to eradicate the practice on health and religious grounds. The SWDO continued their struggle and joined with the Italian Association for women and development (AIDOS) in 1987 and over the following years founded a campaign based on health complications fearing that one based on human rights would fail. Both campaigns collapsed in 1991 with the overthrow of Siyad Barre and of the disintegration of the government in Somalia. In 1997, at the time when Edna Adan Ismail was WHO Representative in the Republic of Djibouti, UNICEF requested her to assist to obtain the approval of the government of Somaliland for a seminar to be held in Hargeisa to launch the first seminar to revive the campaign to eradicate FGM. The seminar was approved and held and a national committee and a regional task force were established to develop formal policies. This work continues and at the same time a variety of NGO’s and women’s groups also run their own eradication campaigns.

There have been encouraging signs that the awareness campaigns are having the desired effect. A recent Save the Children publication on child rights in Somaliland found that most girls and boys, and some care givers, community leaders and government officials, point to the harmful traditional practices of FGM as the most negative aspect of Somaliland society and culture. Education and the empowerment of women brought about by eradication campaigns are changing the views of Somalilanders on FGM, but it is only by the implementation of audits like this one conducted at the Edna Adan Hospital that the rate of change can be accurately recorded and evaluated. In a society where the practice is almost universally accepted change will occur slowly for as long as people fear discrimination for choosing to break with tradition.

The Edna Adan Maternity and Teaching Hospital is a major player in the campaign against FGM.

Please see the Edna Adan University Hospital website for further information about FGM, the hospital and its vital role in this work.