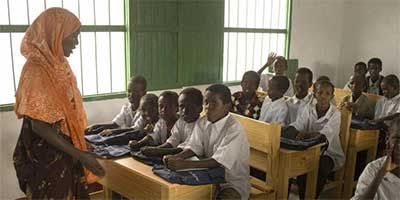 For decades, Somalia has had no government and thus no state education system.

About 40 percent of Somali children attend school, according to UN figures. Most of these schools are run by parents.

A thick layer of dry leaves rests on the stairs leading up to the classroom. No one has bothered to sweep away the leaves ever since the school in the Somali capital of Mogadishu was severely damaged in the civil war. Since 2011 no one has taught in these classrooms. Lessons are held in a handful of rooms in neighboring buildings.

For pupils in Somalia it's time for summer holidays, but there's still work being done in the damaged rooms.

"We are currently renovating five classrooms," said principal Hassan Adawe Ahmed. "Last year we got seven back in order."

Money for the project comes from the Somali aid group DGB (Help for All), which receives its funding from the German NGOs Caritas and Diakonie Katastrophenhilfe as well as the German government.

The civil war in Somalia has spanned more than 20 years. During that time, the school that Ahmed runs has been severely damaged three times, most recently in 2011. The Islamist al-Shabab militants had barricaded themselves in the school and were attacked by troops from the African Union.

"After the latest attack, the roof was completely destroyed, the shutters and doors were stolen," said Ahmed, adding that some of the classrooms have been remodeled, the benches there freshly painted. They're making progress in the other classrooms, too. "Soon, we'll be able to hold lessons for the pupils again," Ahmed said.

The school is called "Umulhura," a Somali name given to women. When times were good, 3,000 pupils attended classes here, but now there are only 600. The falling numbers are a direct result of the civil war. The more violent the battles, the more people were forced to flee.

In the past year, the situation has stabilized somewhat. For the first time in more than 20 years, Somalia has a legitimate government under President Hassan Sheikh Mohamud. The school that Ahmed leads is much older than the new government: Classes have been held here for 18 years.

Maryam Saleban Abokor was one of the parents who took charge.

"I came up with the idea because I watched the children around me. They were roaming the streets because after the fall of the government, the schools were closed," says the 50-year-old mother of five children.

"I was afraid that the children would become criminals if they were not busy and did not learn anything." She turned to the other parents in the neighborhood and suggested that they renovate the school and start teaching.

Learning despite anarchy and civil war

The other parents were quickly convinced, and thus they founded the school together 18 years ago. Everyone got involved in his or her own way. Some donated money, others helped with renovation or cleaned up after the work.

In Mogadishu and throughout the rest of Somalia, many schools were established this way: Parents, religious organizations, civic groups or local aid organizations sprang into action so that children could learn despite anarchy and civil war.

Although a government has been in place for a year, the parents have maintained responsibility for the schools. The parents determine school fees and teachers' wages.

By Somali standards, the fees are high at 7 to 12 dollars (5 to 9 euros) per child per month. According to estimates from aid agencies, 40 percent of Somalis are dependent on support from relatives abroad. At "Umulhura," teachers earn $140 per month; the director earns just $10 more.

"That's not enough to cover costs," said Ahmed. But because five of his eight children also attend the school, he carries on.

"We focus on the curricula of various countries," said director Ahmed. "We've taken elements from the curriculum in the United Arab Emirates as well as parts of the Kenyan and Saudi curriculum." A committee of 40 parents then determines the final curriculum. That explains why there are differing lesson plans throughout the country.

Somali school supporters have also established two umbrella organizations that distribute certifications of achievement after final examinations so that the education system is somewhat comparable across the country.

Nevertheless, Ahmed and the parents are waiting impatiently for the new government to assume its responsibility for the education sector.