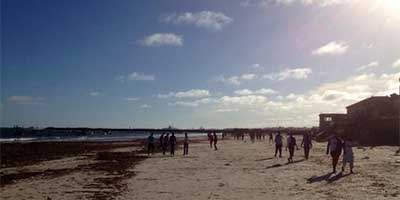 Come to Lido Beach in Mogadishu. The fresh sea breeze really does feel like a wind of change.

Boys kick footballs around on the flat sand, against the pockmarked, low-rise skyline of the Somali capital.

Young couples stroll along the seafront - men and women together, appropriately dressed, of course.

But as life returns to Mogadishu, its people, scarred by decades of war, are facing a mountain of problems.

A combination of fighting and famine has left 1.1 million people displaced. In Mogadishu alone there are more than 500 camps where families eke out a meagre living under scraps of tarpaulin and cloth supported on stick frames.

The United Nations says women in particular are vulnerable here. They recorded 1,700 rapes in the camps last year - many are thought to have been carried out by members of the Somali security forces.

The Somali president recently acknowledged the problem when he visited a training camp for military cadets on Monday.

"Those few among the security forces who rape and rob our citizens must be fought and be defeated just like Shabab," said President Hassan Sheikh Mohamud, according to a reporter from the Associated Press, who was there.

At a centre for women who have been assaulted we met Fartun, who was raped in July last year. Fartun is not her real name, she wanted to remain anonymous.

"He came into my tent in the middle of the night. When I tried to scream he hit me in the head and told me not to shout. He had a gun and he threatened to shoot me if I resisted. He raped me in front of my son, and no-one come to my help."

Nearly nine months later, Fartun still suffers abdominal pains and infections. She still lives in the same camp where she was raped - she has nowhere else to go.

Like many victims of rape, Fartun did not pursue the matter. Apart from the stigma, there is also fear - some who have reported their assault have been threatened, others have even been arrested.

In January a woman who alleged she had been raped by members of the Somali security forces was charged with "insulting a state institution".

Both she and a journalist she had spoken to were convicted and sentenced to terms in jail, though the verdicts were later overturned.

In Mogadishu, as the shadows lengthen and evening settles in, the streets are no longer empty. The markets are bustling - men sit around in tea-shops, drinking and chatting. Business is thriving.

All of this is a result of improved security. But that is largely thanks to the 18,000-strong African Union force, which has over the past 18 months driven the Islamist al-Shabab rebels out of Mogadishu and other parts of the country.

Somalia's fledgling National Security Forces consist largely of a patchwork of militia - groups of untrained young men who are used to the power that comes with carrying a gun, but whose discipline and loyalty is questionable.

The EU, the US and others already train and finance the Somali security forces, as part of wider efforts to combat piracy and al-Qaeda in the Horn of Africa.

Now Britain wants to join them. Despite the grave allegations of abuse, the UK will use an international conference in London next month to pledge direct funding for the Somali army and police. And it will push for others to follow suit.

"Clearly we're all shocked by the prevalence of sexual violence in this country," says Matt Baugh, the UK Ambassador to Somalia.

"But if you have two generations of men who have grown up with a gun in their hands, without any form of command and control in military terms, unless you start to break that cycle, then the sort of sexual violence that we see here will simply persist."

And so Somalia's international backers are left with a dilemma - to fund a force some of whose members continue to abuse the vulnerability of the very people they are supposed to protect. Or to withdraw support, and put in jeopardy the security improvements that have made a real difference to life in Somalia. For Matt Baugh, the choice is clear:

"It seems to me inconsistent that we wouldn't want to help this federal government now start to move forward with the very real difficult challenges of security sector reform, training the armed forces, building their capacity, building their understanding of human rights obligations," he says.

This is still a fragile peace. Without international support, Somalia's security forces would fragment. The country could collapse back into anarchy. But balancing security with human rights is proving problematic.