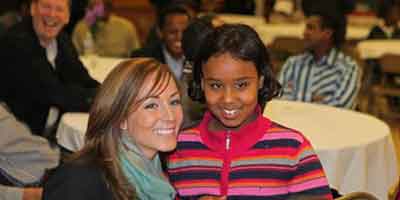 Advocating for Women's Rights in Somalia

You’ve spoken about how you wanted to make a difference to the women in Somalia and how important it was for you to make an impact upon the community and future generations.
With so many choices and avenues, how did you come to decide upon the scholarship program? Why that?

Before I even set foot in Somalia, I admired the women of the country.

I am an avid watcher of the news and it was so apparent to me that the women of the country needed education and reform.

The women of the country were already beginning to demand to be heard.

There’s no normal government in Somalia so the education system is already expensive and many schools just do not accept female students.

The women of Somalia were already asking for change and I felt these women were so brave.

I was only actually in the country for 3 days before I was kidnapped, but on the second day I visited a world food program.

The women there had been waiting for hours in the heat with war around them and yet still they had such grace. They were offering to share their food with me! I was so impressed by these women.

"There was one woman that risked her own life to help me! She was so brave, and that woman had a profound effect on me."

When they kidnapped me and Nigel Brennan (the male journalist whom I traveled with), there was a moment, a day, where we actually escaped.

We ran to a nearby mosque and, of course, they came to recapture us.

The local people tried to protect us and there was one woman that risked her own life to help me! She was so brave, and that woman had a profound effect on me.

The last time I saw her she was surrounded by guns.

That was the last image I had of her and I don’t know what happened to that woman after that. That stayed with me. I really wanted to honor that woman and I began thinking what would I do to make Somalia a better place.

Even when I looked at my captors I saw they were teenagers who were a product of their environment.

I thought: I am going to do something to make this a better place for these women and I had 15 months of being held captive to focus my energy on this.

I just kept thinking of how people say if we change the life of a girl you can change the world.

What have been the most challenging aspects about establishing and operating in Somalia? How does the process work, and how do you even set up a charity in someplace like Somalia?

"I just kept thinking of how people say if we change the life of a girl you can change the world."

There’s so much corruption in Somalia and there’s actually no formal banking system in the country. But it does have a money transfer system and that is how people get money in and out of Somalia.

It's actually the way that my ransom was paid and the way that ransoms are paid for other situations. Like when boats are taken through piracy.

So we actually use this system and we pay the fees to the university, which are around $600 a year, but we pay the living costs to the young women directly. This is because there is so much corruption.

If we send the money for living allowances to them, we can be sure that it’s going directly to the women. This is an amount of $32 a month, and while that doesn’t sounds like a lot. It’s actually a large amount in Somalia.

This money ensures they aren’t hungry, can buy educational supplies and even allows them to help support their family which is so important.

How do you think the scholarship programs will have an impact upon the community, not just the individual?

When we began the program we had 1,600 applicants and we sat as a panel to go through these and bring them down to ten, which then became 11, that we felt we had to put through the program.

As part of the process we asked applicants to write an essay describing how they would change the situation in Somalia and what they envisaged for Somalia in the future.

How has the response to your foundation in Somalia affected you? Have the women who are going through your program touched you personally?

All of the young women are inspirational.

"It’s wonderful to offer these workshops to these young women and I’m really excited by that."

We keep in regular telephone contact with the girls and feel very excited to hear about their progress.

There is one girl in the program, Amiira, who wants to be an environmentalist. When I was thinking about change in Somalia this wasn’t even on my radar, but this young girl is such a visionary!

She had thought about the effect of bringing pride back into Somalia. Of people having pride for their beaches, the country and how this could bring change in young people.

For me, it was inspiring to see how she was thinking long term for her nation.

What does the future hold for the GEF (Global Enrichment Foundation)both in the next few years and for the long-term?

In 2011, we are offering another 25 places and 10 of these will be for high school students.

We actually found a school in Somalia that is a boarding school run by Americans. They live and teach there, but one of the most exciting things about this program is that it offers advocacy workshops.

To start working with and supporting these girls as young as at high school age is really exciting and positive. It’s wonderful to offer these workshops to these young women and I’m really excited by that.

What’s the future for developing the program?

We are very positive about increasing funding and global awareness in 2011.