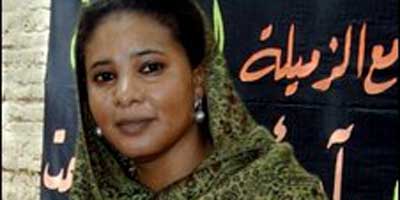 A Sudanese journalist who reported on the assault and rape of a political activist in January by the country’s security forces was sentenced to jail on Tuesday over her detailing of the incident.

According to Sudan’s Publishing Crimes Court, Amal Habbani was fined 2000 Sudanese Pounds ($660) and if she refuses to pay the fine, will be sent to prison.

This is the same court that charged Fatima Ghazali last month for “publishing false news.” Ghazali refused to pay the fine and is currently in jail.

Habbani has also said she would not pay the fine and will spend one month in jail, according to sources.

The pan-Arabic press freedom organization The Arabic Network for Human Rights Information (ANHRI) reported that 7 other reporters who had written about the assault and rape are also expected to be sentenced in the same court in the near future.

These reporters detailed the assault and rape of activist “Safia,” which gained widespread international attention and left the Sudanese government attempting to silence the incident.

Safia went on video detailing the incident and the video quickly spread across social networking sites. She told of her rape by Sudanese Security Forces after she participated in a protest in January.

Journalist and media outlets in the country quickly picked up the story and demanded an investigation into the matter, which to date has not occurred.

“The ongoing policy of imposing extortionate fines on journalists, imprisoning them, and constraining media freedoms is becoming systematic. It was more suited for the Sudanese authorities to seriously investigate what happened to the political activist ‘Safia’ instead of penalizing those who perform their part in publishing the truth,” ANHRI said in a press statement issued on Tuesday.

“Media freedoms in Sudan is declining. Authorities are being openly hostile to journalists. Therefore, international and regional organizations and all those concerned with freedom of expression have to pressure the Sudanese authorities to guarantee freedom of journalism and media, without tracking, confiscation, or prohibition, and to release all prisoners of opinion out of the Sudanese prisons,” added the Cairo-based organization.