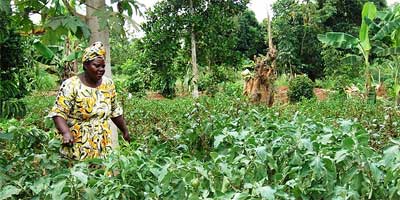 For most Ugandan women, obtaining a commercial loan to start a business has been very difficult. Many do not have the required collateral of land title deeds and many cannot afford the interest rates charged by commercial banks.

But six women-led rural banks have begun changing the lives of women in rural Uganda, easing their access to credit and enabling them to start small businesses and improve their food security.

About 20 kilometres from the Ugandan capital, Kampala, is Wakiso. Here the African Women Food Farmer Initiative, a cooperative savings and credit society, is one of the six rural banks run by women. It has over 1,600 savers and borrowers and is supported by the Hunger Project, an international organisation promoting sustainable end to hunger.

"It is a unique bank because it is run by women and it supports women, especially those engaged in agriculture. We mobilise women and encourage them to fight hunger and poverty by saving as well as accessing small loans," said Rose Nanyonga, the bank manager.

Nanyoga explained that unlike commercial banks, this village bank is owned by women who have a stake in its growth.

"Our members buy shares in the bank. So they own it. And they get dividends at the end of every year," said Nanyonga. All seven of the bank’s board members are also women.

The bank does not merely provide clients with access to credit. Outside the banking hall agricultural input, lanterns and even solar panels are available for sale to the bank’s clients.

Joel Komakec, a project officer from the Hunger Project, told IPS that they want to ensure that the bank’s borrowers buy the right seed and equipment with the money loaned to them.

"With the current energy crisis in the country everyone is rushing to buy solar panels. But the chances are that a borrower will access a loan only to buy a substandard one. So we make sure they get the right one," said Komakec.

Daisy Owomugasho, the Hunger Project Director in Uganda, told IPS that the village bank microfinance programme is part of a strategy being promoted in Uganda and eight other African countries.

"So the credit they get in the form of microfinance is supposed to help communities either grow food, or access inputs, or improved seed or any other thing that they might need. We look at it as a holistic approach to ending people's hunger and poverty," said Owomugasho.

Owomugasho said men were also free borrow from the bank.

She said communities are trained how to effectively manage and use credit in order to escape poverty.

"But we realised that to empower women they also have to be in charge of credit. They are taught book- keeping skills, banking skills and they are able to manage the rural banks themselves," said Owomugasho.

She said all the six banks are not only making a profit, but have had a high rate of loan repayments because their members feel that they own the banks.

Fourteen kilometres away from Wakiso is a blue metal kiosk that provides banking services to the rural areas around Kikandwa Parish and beyond.

It is run by Aisha Nansuna, who collects the daily deposits and facilitates withdrawals from clients who cannot travel to the main branch.

Nansuna told IPS that the location of the kiosk has helped instil a culture of savings among rural women in Wakiso. "You see women bringing even the smallest amount of money for saving because the bank is near," she said.

Nansuna is also a beneficiary of the rural bank. Behind the kiosk is her well-stocked medicine shop.

"I have benefited a lot from our bank," she said, "I started with a loan for poultry, then I later applied for 1,500 dollars, which I used to establish this drug shop." With the money she makes from her business she has been able to send one of her children to university.

"We are now paying 20 percent interest and they give us a period of 10 months to repay that amount. But I’m told the other banks are charging over 30 percent for loans," she said.

"This bank is very good because it is our own bank. We, the villagers, we like it very much because we are not put under too much pressure to repay loans," she said.

"I have just taken on the firewood business because charcoal is very expensive and there is demand for firewood," she said explaining that through the skills training she was taught to identify and follow a need.

Kabajungu told IPS that through the training she has learnt how to survive even amid hard economic times.