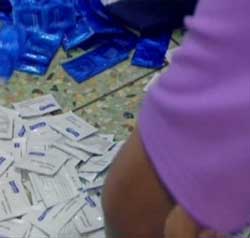 She stands out in the Indonesia capital. She is taller than most and her black skin receives auspicious looks from those around, who often stare blankly at the young woman. This is Marta’s life now, after spending two years as a sex worker in China and Vietnam.

“My life is over right now. All I want to do is go home,” the 19-year-old told Bikyamasr.com, sitting in the back of a Jakarta cafe, away from onlookers. “There aren’t that many black people here and most know what we are, or were.”

A Life Turned Upside Down

Marta was only 17-years-old when she landed what she thought was a solid job working for a Chinese company in southern China, but on arrival, her life was turned upside down. The woman who met her at the house she was supposed to be staying, told her she was in debt thousands of dollars and to pay it off she was to work for her now.

“I didn’t understand because the work office in Kampala told me that my application as a secretary had been successful and that my English skills were needed in China,” she admitted.

Instead, she was forced into working as a sex worker at a brothel in China, then moved to Vietnam 6 months later. Her situation turned from worse to incomprehensible.

“At first, all I was doing was cleaning the rooms for the other women, then I was told I would have to start really working,” she begins, the tears beginning to form around her eyes. She is tired.

They made me have sex with men

“For the next many months, in China and Vietnam, they made me have sex with men. Some days I would have sex with four or five people a day because I was told I had to work to pay my ticket and expenses.”

Finally, in Vietnam, after months of slavery, Marta escaped by boat to Indonesia, where she sought the aid of human rights organizations in the country. They assisted her and have helped her find a paying job as a maid with a respectable Indonesian family where she makes $400 a month.

But her health situation isn’t over, as the bump in her stomach reveals. She is pregnant, but she argues she is lucky.

“Yes, I am pregnant now and it isn’t what I wanted, but for many of the other girls, they have HIV and no assistance to receive the help they need. They will die young,” she revealed.

Unfortunately Marta’s story is not unique.

According to some estimates at least 600 Ugandan girls in recent years have been sold into sex-slavery. While government officials in Asia have promised to crackdown on the human trafficking, it is in Uganda, where recruitment agencies promise well-paying jobs for young girls that must be stopped.

According to a labor official in Jakarta, “there is so much work that needs to be done, including possibly ending visas for younger women from Uganda if we are to end this horrific practice.”

But others argue that it has to stop at home, here in Asia, where the desires for “African women” must be countered.

“So many times, the men would say racist things to me about how black I was before they had sex with me. It was horrible. I thought about killing myself often,” Marta added.

In Malaysia, as well as in Indonesia, police are moving faster to tackle the growing sex-slavery problem. According to AFP, Malaysian police on October 21 last year, discovered 21 Ugandan women at one location and some 60 have been detained by Malaysian authorities.

The International Organisation for Migration says that in the past five months 14 girls have been brought back to Uganda.

But for the scores of other Ugandans like Marta who have been sold into slavery and sex work, action is needed swifter and more substantial to end the trafficking of young girls.