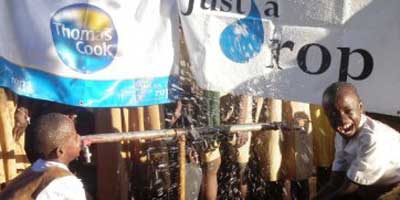 Article reproduced here with kind permission from Just a Drop

Hope Children’s Centre was established in 1994 in response to the growing number of children left orphaned as a result of AIDS.

The centre runs a primary school close to the capital, Kampala, and has made enormous strides since its humble beginnings; however, the sanitary conditions have always been in an appalling state. 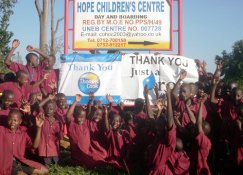 Water for drinking, cooking and washing had to be fetched from a stagnant pond over 4km away. In the case of the school’s boarders, this meant rising at 5am to make the journey to collect water before breakfast. John Benjamin Mwita, 15 years, was one such boarder who frequently had dysentery as a result of drinking the dirty water.

Thanks to a generous donation from Thomas Cook, Just a Drop was able to build a new well at the school, and a sanitation committee was set up to teach the children the importance of good hygiene.

Furthermore, over 50 families and their animals in the local community have benefited from the new water source. 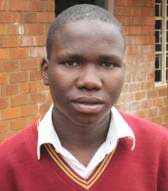 John Benjamin MwitaJohn is one of many orphans living at the Hope Children’s Centre in Kampala.

The water he used for cooking, washing and drinking came from a small, stagnant pond over 4kms away from his school. He was often forced to miss school due to illnesses, and many of his classmates also became sick with malaria or diarrhoea from drinking the dirty water.

Just a Drop built a new water well at John’s school which is now benefiting all of the children at the centre, as well as the local community.

“When we had bad water from the pond, I had dysentery three times and each time, I missed one month of school to have treatment and recover. Now, I don’t have to walk long distances to collect water and I feel much safer with this new, clean water.”