Uganda: Supporting Older Carers & Those Who Rely on Them 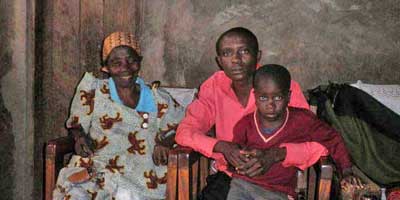 Kasozi with a young boy called Kibirige Ronald (Junior) who is infected with HIV/Aids, and his grandmother who is his carer. Junior's mother is also HIV positive. Medication has to be paid for, leaving no funds for school fees.

January 23, 2010, was a very significant day for Abdu-Karim Kasozi. A day when a dream started to be realised.

On that day, Bakadde Foundation Network (BAFNET) was formed; an organisation which would address the challenges faced by older people and orphans in central Uganda.

“BAFNET is there to empower the older community and the orphaned grandchildren in Uganda, enabling them to effectively take part in all society activities that affect them directly and indirectly and thus boosting their socio-economic status," says Kasozi.

Why Older People and Orphans? 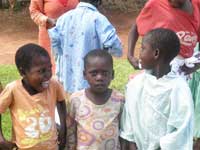 Orphans in receipt of new clothes, organised by BAFNETThere are well over two million orphans in Uganda - i.e. children who have lost one or both parents. In nearly half the cases, this is due to HIV/AIDS.

According to UNICEF, 65 percent of children in Uganda fall under the category of ‘orphans and other vulnerable children’. A vulnerable child is one who lives in a child-headed household or is a child labourer, an orphan, a child not in school, an idle child (that is, one without work or school), a married child, a child living in a household headed by an elderly person, a non-orphaned child not living with his or her parents, or a child living with a disability (Uganda National Household Survey).

Orphans are Often Cared for by Vulnerable Older People 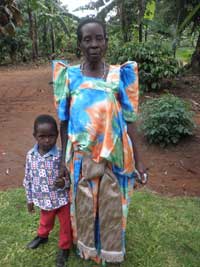 BAFNET beneficiaries: a grandmother with her grandson - Musoke, in Buwama. Musoka is an orphan so he was taken to the village to stay with the granny.One household in every four contains at least one orphan, and 14 percent of orphans are cared for by an older member of society - who are, themselves, often vulnerable.

In a society where people struggle to live amidst the hard economic times, older people have an extra burden to deal with. Besides age-related illnesses, they often have to take care of their grandchildren, who are either orphans or vulnerable in other ways, due to neglected amidst poverty, food shortage, poor shelter, and hygiene.

Yet older people are often too weak even to meet their own basic needs.

“More than 90% don’t have any choice but to continue often physically demanding, strenuous and badly paid work into very old age with no form of state support,”  HelpAge International.

Older people are struggling to cope with the increasing demand placed upon them, and it does not help their situations when their voices are not being heard by policy makers. They lack a representative voice to fight for their rights and the ministry for the elderly has not done much to that effect. Even government interventions put in place further show the marginalization of the group.

In 2008, the UK’s Department for International Development (DFID) funded nearly £8 million towards a pilot scheme that was launched by Uganda’s Ministry for Gender, Labour and Social Development. The aim of this scheme was to elevate thousands of its most vulnerable citizens, including older people, out of poverty. A monthly stipend of $10 USD would be provided to households that are suffering from chronic poverty. However, this amount would not solve a quarter of their problems, and would not even last through the first week of each month. 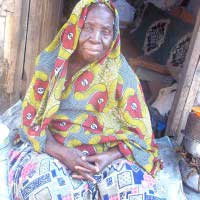 BAFNET beneficiaryMoreover, since the launch of this scheme, many of the elderly are still waiting to receive the money. Campaigning groups argue that poverty focused initiatives like these cannot address the problem.

Even within their own communities, older people are often stigmatised. Older people’s opinions and advice, often times are not sought, and even if freely given, it may be ignored. They are considered a burden to society and many have been left to die due to neglect.

Even many of the numerous women’s NGOs have failed to address the issues of older people. 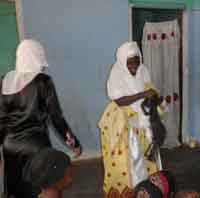 BAFNET beneficiaries receiving donated clothesKasozi's vision was to set up a grassroots organisation - BAFNET, to help support and empower the orphans and older members of the communities.

In view of such glaring gaps and injustice towards older people, Kasozi says this propelled BAFNET to open its doors to the public, and fill the gaps through its project and programmes to Ugandans.

BAFNET trains the women and orphans, and empowers them economically through capacity building, health, education and culture, water and sanitation, advocacy, forming networks, and creating networking opportunities for them.

“We have helped to create awareness about this group through advocacy. In addition, we try to provide them with basic necessities to provide support to them on a monthly basis, to ensure that they can also have support when it comes to feeding and clothing."

BAFNET provides the group with counseling, computer training, provision of basic needs like food, and clothes:

“We offer those services because it is necessary to help the marginalized and bring about change in their lives and development. 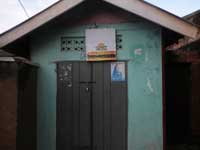 Head office of Bakadde Foundation Network, located in Makindye Mubarak Zone, mpalanyi laneBAFNET currently has 80 beneficiaries: 56 elderly and 24 orphaned children throughout six districts in Uganda - which includes Kampala, Masaka, Wakiso, Mukono, Mpigim, and Mityana. These districts have have been able to get some basic needs. The groups have benefited because of the awareness campaigns which BAFNET has carried out since its inception. Some of the beneficiaries have been able to have their voices heard within some societies to a smaller extent, especially in the areas of economic empowerment.

At this time, BAFNET has one office in Makindye Mubarak Zone in Kampala District.

In the other five districts were we operate, we meet with coordinators who are based in those districts." 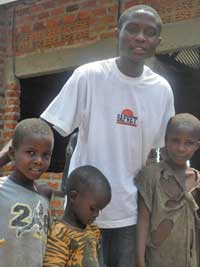 Kasozi says their organisation a good cause for which to work because many lives have been changed, but a lot of work has to be done because BAFNET needs more support for it to address the issues affecting the older community and orphaned grandchildren.

He says that though Ugandans still live a in a society where women are still marginalized because of the poor perception and the cultural backgrounds in Uganda, the situation can be reversed by doing more advocacy and sanitization to bring about awareness of the community.

In April 2012, BAFNET launched a five-year development programme intended to help and support BAFNET beneficiaries throughout BAFNET areas of operation.

BAFNET hopes to expand the services to other parts of the country, but the success of such an intervention requires the input of donors, development partners, and a team of dedicated hardworking people, with a strong passion for humanity, volunteers, and the community.