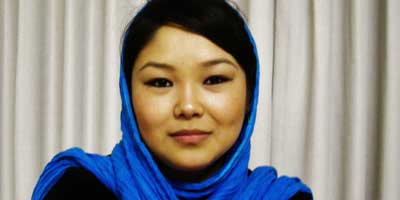 19-year-old Anita has already experienced a lot of changes, which led to her attending school in Pakistan, Afghanistan, and the USA.

She is now in her second year of a four-year scholarship to Mount Holyoke College in Massachusetts and majoring in Film Studies and Computer Science and minoring in Russian language.

Before starting at Mount Holyoke, she worked as a producer with TOLO TV, Afghanistan's most popular television station.

Summer jobs in Kabul have included working with the Afghan Human Rights Research and Advocacy Consortium (HRRAC) and Equality for Peace and Democracy (EPD) - a member of the Afghan Women's Advocacy Coalition.

Gender equality is an issue which is never far from the minds of many young Afghans, both women and men.

There are concerns that, in efforts to 'reach out' to the Taliban leadership, President Hamid Karzai may be forced to severely compromise on issues affecting women in particular.

It is hoped that such fears will be addressed at the International Conference on Afghanistan in Bonn, Germany, will take place on 5 December 2011.

Anita Haidary and Noorjahan Akbar are two young women who are particularly keen to ensure that the issue of gender equality is high on the agenda in Afghanistan.

In April 2011, Anita and Noorjahan set up Young Women for Change (YWC), a movement of young Afghan women and men advocating against sexual discrimination and inequality.

Chris Crowstaff asked Anita about the lives of young women in Afghanistan, and about her vision and hopes for the future.

1)  How much influence do the Taliban still have in Afghanistan?

It depends, if we are talking about the Taliban as a group, then yes, it has influences over some provinces of Afghanistan.

If we talk about ideology, then it has control over a lot of places - even if not physically, then certainly culturally, and in the thoughts that people vocalise.

This is so because we have freedom on paper only - we failed to put new regulations into action. We force people to do something without teaching them the reason behind it.

If people have believed something for years, it is hard to change it; it takes time.

There is an old saying that says, “You shouldn’t let your women to be educated because they turn into witches”.

The quote is ingrained and powerful, despite its absurdity.

Without education, women are simply puppets moved by different male members in the society. It is scary, to think that you can be led like a puppet.

We need to teach the men that we are not puppets. We belong to society as much as they do. We are not here to lead them but to participate.

2)  Would you like to comment on overseas involvement in Afghanistan - particularly the UK and US military intervention?

Well their involvement is good; however, it depends at which level they are involved.

They have sent their soldiers to protect us. We thank them for that but, as a country, I believe there are certain limits we have to set for them.

I think we really need them to give their skills to our soldiers, rather than feeding us today and, when tomorrow comes, they leave and we have nothing to hang on to.

I really think they should invest more in empowering our police and soldiers.

3)  Do you feel that the oppression of women in Afghanistan is best dealt with by Afghans themselves? Is there anything the international community can do to help?

I believe that only way for Afghanistan to change is when the changes come from inside the society and from Afghans.

They need to learn and believe in it. They have to understand the problems and find solutions. They know the society best.

We have to educate them; find youth who are awake and can feel the pain. They will help their society.

It is impossible for a few people to fix everyone.

The important part is for the idea to grow.  And that can happen when someone is from the same place and speaks in the same language as you speak. It is easier to understand that.

No one can help Afghanistan, unless they do it themselves. . .  I strongly believe that movement and change has to come from within the society.

No one can do anything for us unless we do it for ourselves.  And then the international community would be able to help more with skills, education and finance.

4) What would you say to people who feel that Islam is the cause of women's oppression in countries such as Afghanistan?

I wouldn’t ever say Islam is the cause.

It is people who causes problems.

There is no religion in the world that says to harm humans. Islam has given rights to women more than to anyone.  It is not followed well.

Religion has been used by male interpreters who have used religion for their own benefit.

The Prophet’s daughter and wife were the closest to him.  He was the one who stopped Arabs from burying their girls alive.

According to Islam, it is duty of every man and woman to be learning and to be educated. If the religion puts that as a duty then how can it be against it?

Likewise most of the other examples are like that.

5)  What is it like to be travelling between Afghanistan and the USA for your studies? How do you adapt to the differences?

Every time I go and come back the feeling is very different. I knew very little about my country.

After traveling I learned more and started appreciating good parts of my culture.

It is different because since starting college I am more attached to my country.

I used to always think about problems and it would stop me sleeping, but now I have a goal in life.

Every time I go back I find more things to connect with and ways to fix the problems. I don’t believe that nothing can change in Afghanistan. Education definitely gives one more power to do things, or to have more influence.

I know most of my friends have the same feeling.

My country doesn’t have to be like this, it can change.

6)  You describe YWC as a 'dream come true'. Could you talk more about that and your reasons for setting up YWC?

After returning back to my country and truly living there with full understanding, I always wanted to do things.

Whoever I met always told me that is impossible. I never stopped believing that it is possible.

It is hard but not impossible.

I always organised small projects in places I lived - but it did not make a big impact.

Until we started working as YWC.

It is an organization that I was thinking of but couldn't completely envisage.

I wanted to work with young people.  It is what we need - to bring in people from different places, different religions and different ethnicity.

Difference makes us powerful - and we will show that through YWC.

We are different in every way, different ethnic groups, religion and working filed, but we have one point in common and that is the idea that we want to work for Afghanistan and want to change it, regardless of the problems we face.

7)  What are your plans for the future with regard to your documentary work and your vision for YWC?

I am a second year film and computer science student. I decided to study film and learn how to make documentary after working with TOLO TV.

While working there, I learned about the power of media, especially in country like mine - where most people can’t read and write, but they can understand when I speak.

I want to use film to get our messages across. I truly believe that YWC is the voice for every Afghan.

We are tired of the same problems and people repeating our problems to us. It is time to change it.

YWC will be joined by all Afghans, if not in person but they will all carry this idea which is what we need.

The Street Harassment protest was a step to tell people that there are problems and hiding them won’t help. Simply talking about it only will not help either - so we had a campaign.

We have lectures to educate people. Now I am working on a documentary that will talk about the streets and show the results of what we are doing in this society for so-called “correction of women” - we have to pay big price for it in the bigger picture.

We have more projects that are mostly based on society and working closely with society.

We are also working on connecting the police to people.

We are working on bringing new ideas to schools and to the lower 'stratas' of the society.