Afghan Women Call for Action to Stop Violence Against Women 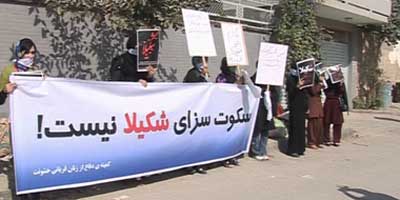 Protesters on Tuesday [9th October] appealed for action on violence against women outside Afghanistan's Parliament House in Kabul after numerous cases appear to have gone unaddressed.

The small group of protestors stood silently outside parliament holding signs but with cloth wrapped around their mouths to signify the silence of the authorities on multiple cases of sexual and physical abuse, including murder, of women.

One protestor who spoke to TOLOnews said the Afghanistan's Independent Human Rights Commission had cases of over 50 "honour killings" in the first six months of the Persian year which had not been pursued.

"More than 50 women were killed since the start of the year. We are asking the government to assess these files and punish the criminals," the female protestor said.

So-called honour killings refer to cases where family members have killed a woman who is considered to have brought shame on the family.

Another protestor pointed to the case of Shakila, who was found dead in the home of a Bamyan provincial official earlier this year, and the 100-lash whipping of a 16-year-old girl in Ghazni province by mullahs because she was raped.

"Shakila was innocent," the protestor said. "The officials are trying to ignore the case because of their relationship with the murderers."

The protestors called for the prosecution of these cases to happen immediately and for all crimes of violence against women to be tried.