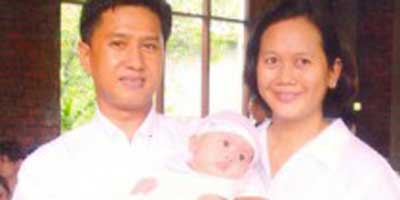 Veteran member of Burma's 88 Generation Students, Nilar Thein, confirmed to the BBC that she had been freed from Tharya Wadi prison.

The activist served eight years in prison after the 1988 demonstrations and was jailed again in 2008 for 65 years for illegally using electronic media.

"I'm healthy and happy to be released and happy to see my baby," she told the BBC, referring to her daughter, born the year before her imprisonment. "I was released today along with nine other political prisoners in Tharya Wadi prison but there are still 25 more left inside," she said.

Her husband, Kyaw Min Yu, known as Ko Jimmy, has also been freed, as well as Htay Kywe, a student activist jailed in 2007 for 65 years.

Former Prime Minister Khin Nyunt, who was detained in a purge in 2004, is released from house arrest.

The precise number of political prisoners in Burma's numerous jails is disputed, but if the pattern of this latest amnesty continues, the majority of those broadly accepted as "prisoners of conscience" will soon have been freed, the BBC's Rachel Harvey says.

Those freed include veterans of the 1988 student protest movement, monks involved in the 2007 demonstrations and ethnic-minority activists. The NLD party of democracy leader Aung San Suu Kyi said the move was a "positive sign".

Five of those released were journalists from the exiled broadcaster Democratic Voice of Burma, based in Chiang Mai, Thailand.

Speaking with The Irrawaddy on Friday from outside Thayawady prison, Nilar Thein, said, “I’m happy, and I will be very happy to see my family. We will get involved in democratic reform with Auntie [Aung San Suu Kyi].”

“The reforms introduced by President Thein Sein and Auntie Suu are what we have so long been waiting for. But we have to work harder for the remaining colleagues who are still in prison. If all of them are released, that will be a beautiful image for all of us,” she said.