My father's release from prison is good. But there is still no reform in Burma 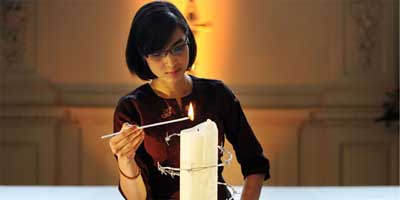 My father's release from prison is good. But there is still no reform in Burma

On Friday 13 January I was able to speak with my father Ko Mya Aye, a free man again after being jailed in 2007 for his role in organising protests against the Burmese dictatorship. I was shaking, so excited; I could hardly believe it was true.

There have been so many broken promises in the past, so many times when releases were promised and didn't happen, or where only a small number were released and my father was left in jail. He was held in a remote prison, at one point even on death row, and was denied medical treatment for a life-threatening heart condition. I feared I may never see him again.

His voice was wonderful

As a refugee living in London, I still can't see him, but just to hear his voice was wonderful. Typically for him, it didn't take long for him to start talking about politics, and one of his main concerns is the political prisoners still left behind in jail. "We must campaign together for their release," he said.

Of course I agreed, but at the same time there is a part of me which is anxious and scared.

This isn't the first time my father has been arrested and released. And I fear it won't be the last.

My father and other political prisoners are being released but with no apology and no acknowledgment that they should never have been in jail in the first place. This wasn't a true amnesty or pardon, the sentences have just been suspended. They still have criminal records, and receive no compensation, no support for the medical care they need to recover from torture, mistreatment and psychological abuses. They receive no support to rebuild their lives. There is no attempt at reconciliation. Instead they are expected to be grateful for being released.

The laws under which he was arrested remain in place. There is change, but not yet reform. Nothing that has taken place so far is irreversible. There is nothing to stop him being jailed again for campaigning for democracy and human rights.

This is one of the reasons why despite seemingly positive steps by the military-backed government, many of us are still very cautious. Are they doing this as a genuine move towards democracy, or just to try to get sanctions lifted? After all, they only just brought in a new constitution which gives the military the power not only to effectively overrule the government and parliament, but also places them outside their control. It was Thein Sein, the new president, who oversaw the drafting of that constitution. Having just drafted a constitution which gives them absolute power, are they really about to give that power up?

My father also spoke about U Shwe Htoo, a prisoner of conscience who wasn't on the list of those released today, or on other lists of political prisoners. They became friends when held together in Liokaw prison. The case of U Shwe Htoo is an example of why it is so important that independent international monitors be given access to Burma's prisons and are able make an independent assessment of how many political prisoners remain in jail.

Some people are now arguing that the release of these political prisoners is proof that there is genuine reform in Burma, and that sanctions should now be lifted. I ask them to remember that in mid-2007 there were around a thousand political prisoners in Burma. This was considered unacceptable, and the European Union, US, Canada, and Australia were debating whether to increase sanctions. Following the uprising in late 2007 the number of political prisoners almost doubled. My father was one of those jailed. Now, after all the excitement about these releases, there are still possibly around a thousand political prisoners in Burma's jails. Compared to the situation last year, it looks like we have come a long way. Compared to the situation five years ago, it looks like we have stood still.

I wish I could have been with my family as they celebrated on Friday night.

But the next day my father was having meetings with colleagues. It was back to work. Many prisoners have been released, but many also remain. Even if all the political prisoners are eventually released, and if there are ceasefires that reduce human rights abuses against ethnic people by the Burmese army, that is just one part of the problem. The political system responsible for these abuses has not been reformed. We still don't have a democratic society or the rule of law. While this is the case, we still need international pressure to support real reform.