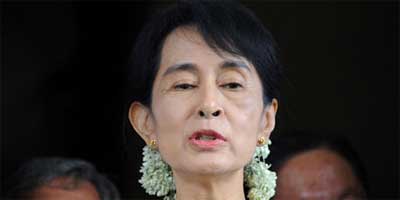 'Good Will Not Enough for NLD Candidates'

“Good intentions alone are not sufficient. We must give priority to those with capacities,” said Burmese opposition leader Aung San Suu Kyi in a speech on Tuesday. The Nobel Laureate went on to outline specific benchmarks for prospective National League for Democracy (NLD) candidates wanting to  contest the April by-elections.

The 66-year-old, who officially became NLD chairperson in a recent reshuffle, said that the party will choose 48 candidates among its members, with priority given to youth, ethnic minorities and women.

But she said that although prospective candidates should be chosen on their commitment to the cause of democracy and public respectability, they must all also be capable of serving the people, be well educated and have a good level of working experience.

Making a public speech in Rangoon's Mingalar Taung Nyunt Township, Suu Kyi singled out Phyu Phyu Thin — a female NLD leader who has become a leading AIDS activist over the past decade.

“As you all know, Phyu Phyu not only possesses a desire to serve the people but also a proven capacity to do so,” said Suu Kyi, turning to her middle-aged follower in front of a cheering crowd.

Although the NLD boycotted the parliamentary elections in 2010, it decided to contest the coming by-elections in response to recent democratic overtures by the new quasi-civilian government.

There are 48 seats up for grabs in the poll with 46 in the Lower and Upper Houses of the National Parliament and two more in the regional assemblies. The Parliament is dominated by the ruling Union Solidarity and Development Party led by former army generals, which is why some analysts believe there is little chance of the NLD having any substantive influence.

But in response to such criticisms, Suu Kyi said, “even a single person can move a nation if one desires to serve their country.” The remark prompted roaring applause from the crowd.

Suu Kyi recently said that Burma, which has long been oppressed under decades of military dictatorship, is on the verge of a democratic breakthrough. Echoing her voice, a top Burmese government official told Agence France-Presse on Monday that Burma has “no other way” but to embrace democracy.

“We are a former military country transforming into a democratic state, which is not easy,” said Thura Shwe Mann, chair of the Lower House of Parliament and a former top army general.

In exchange for its positive changes, the Burmese government is expecting to normalize long-strained relationships with Western nations. This includes the lifting of economic sanctions imposed on Burma for more than two decades in response to its poor human rights record.