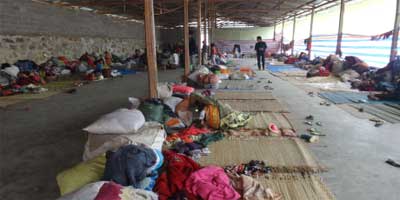 Displaced Kachin families in a refugee camp in China, near Myanmar’s town of Laiza, live next to each other in this bare building which used to store timber. | Photo: AlertNet

The first thing the heavily pregnant lady said, as soon as the aid worker greeted her outside her hut, was "I'm worried about my husband."

Nang San* is nine months pregnant, has two young children to look after, and is worried her husband might have been captured and killed by the Myanmar army – not an uncommon fate for those travelling in the conflict zone in Kachin state in northern Myanmar.

He's been missing for some time. He had gone back to harvest the fields in their native village, which men often do despite the risk to their lives. It usually takes several days to collect the harvest and return to the camps for internally displaced people (IDPs), where their wives and children have taken refuge.

Nang San’s family fled after their village was burnt down and the livestock slaughtered by the Tatmadaw (the Myanmar name for army), she said softly, clad in a faded white and pink top and a traditional sarong.

A month in the jungle

They hid in the jungle for a month before arriving at this camp close to Laiza, a border town near China, not too long ago.

Like 5,000 others in this camp, Nang San comes from a village in Kachin state where the country's military and the rebels, the Kachin Independence Army (KIA), are fighting.

Fighting erupted after a 17-year ceasefire broke down in June, sending tens of thousands of ethnic Kachins fleeing to the Myanmar-China border, an area controlled by the KIA's political wing, the Kachin Independence Organisation (KIO).

Aid agencies estimate there could be up to 50,000 displaced Kachins in the rebel-controlled area living in makeshift shelters and empty halls and needing urgent humanitarian assistance.

While the displaced say they have enough rice to get by for the time being, aid agencies are worried there would be a shortfall without sustained support

Ongoing peace talks have yet to bear fruit, and non-governmental organisation Refugees International said in December, following a visit to government-controlled areas, that there is a need for immediate and long-term aid.

Nang San's story forms part of a host of photos, videos and interviews passed to AlertNet by an aid worker who, on Dec. 26-28, visited two displacement camps housing more than 11,000 people along the border.

The material shows dire living conditions. Thousands share the same floor space in long, narrow, bamboo shelters with little privacy or space while others live in small, dark huts bereft of most belongings.

Yet others make a home out of a former sawmill plant, sleeping on thin bamboo mats atop a cold, concrete floor.  Tarpaulin roofs provide shade but scant protection from cold weather.

We are all very afraid

One woman, who has been at a camp since October, lamented the effect of the fighting and displacement on her children.

"The children couldn't go to school because it is not safe for them," she said. "We are all very afraid. The army (Tatmadaw) shelled us as we were fleeing."

Classrooms in the camps are makeshift and badly-equipped, and children are roped into collecting firewood when they are not studying.

With their regular livelihoods disrupted, the displaced are almost completely reliant on aid. However, apart from the one trip the Myanmar government allowed the United Nations to make in December, these people remain inaccessible to most international aid agencies.

So far, most of the support has been provided by the KIO, exiled Kachins and a handful of foreign non-governmental organisations, but resources are severely limited, said La Rip, coordinator for local aid group Relief Action Network for IDPs and Refugee (RANIR).

La Rip also told AlertNet the situation has not changed in the month since the aid worker visited.

While there has been no new major influx, the conditions for those who are already in the camps in rebel-controlled areas remain a concern. Earlier reports said cramped living conditions, poor sanitation and lack of clean water led to an outbreak of diarrhoea in one of the camps, killing a year-old baby.