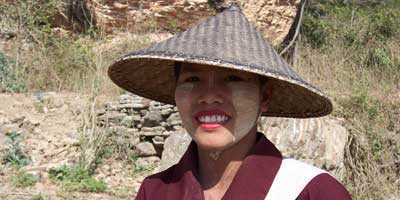 Over fifty years of civil war has left Burma one of the poorest countries in the world.

Burmese society is dominated by the army, which is made up almost entirely of men. This has reinforced the existing patriarchal system, and women human rights defenders are easily targeted.

There is ongoing widespread and systematic use of forced labor, rape as a weapon of war, the forcible conscription of child soldiers, religious persecution, torture and killings.

Such reports are well documented and have been presented by respected human rights organizations including Amnesty International, Human Rights Watch and the International Federation of Human Rights (FIDH), among others.

A PAINFUL CHOICE FOR MOTHERS

"Women with their capacity for compassion and self-sacrifice, their courage and perseverance, have done much to dissipate the darkness of intolerance and hate, suffering and despair..."

“Many of my male colleagues who have suffered imprisonment for their part in the democracy movement have spoken of the great debt of gratitude they owe their womenfolk, particularly their wives, who stood by them firmly, tender as mothers nursing their newly born, brave as lionesses defending their young...”

“Surely... women have a most valuable contribution to make in situations of conflict, by leading the way to solutions based on dialogue rather than on viciousness or violence?”

For Nilar Thein it was a clear choice - whether to remain silent in the interests of her family or to join in the movement to bring democracy to Burma, knowing she risked jail and separation from her baby.

She took the second course of action, believing that in the long run it would benefit her daughter far more than if she had done nothing.

In 1989, Aung San Suu Kyi, Burma's pro-democracy leader, was put under house arrest and her two sons went to live with their father in England.

Shortly before Nila Thein was arrested, she wrote:

She will be missing her two sons, too. Her strength and determination helps me and many women in Burma stand up for justice. I thank her for being with us and leading our movement.

She is a great reminder to the world that the military junta that rules our country forcibly separates mothers and children."

Dozens of women from the 88 Generation Students group and the opposition National League for Democracy braved the taunts and brutality of thugs who broke up their peaceful demonstrations, including Mie Mie and Thet Thet Aung, who each have three young children. Thet Thet Aung is in a prison 400 miles away from her sons and her husband, Chit Ko Lin, is in another prison. Mie Mie's 2 daughters and son are cared for by their father, who visits Mie Mie as often as he can, though she is in a remote prison and it is a long journey. Mie Mie is reported to have been badly tortured and she is now in poor health, suffering from spondylosis.

In an interview with The Irrawaddy news magazine, HIV/AIDS activist Phyu Phyu Thin explained why young women with families to care for were so actively engaged in the struggle. Their feminine nature, their “sympathy and emotion,” drove woman to “sacrifice,” she said.

Like Nilar Thein, Phyu Phyu Thin’s resolve to fight official misrule and injustice remained unshaken after her time in prison. She determined to devote her entire life to the pro-democracy movement.

The junta’s attempt to break her spirit had misfired - “That’s their mistake,” Phyu Phyu Thin laughed. Before her arrest she had worked only occasionally at the NLD headquarters. After her prison experience, she rarely missed a single day.

That prison experience 'transformed her feminine compassion and emotion into a stronger commitment.'

Following the 2007 demonstrations and arrests, Phyu Phyu Thin and three other women sent a letter urging the UN to 'take immediate measures to help protect women in Burma from continuing rights abuses, including arbitrary detention, 'hostage-taking' (detaining family members), torture and other ill-treatment and a lack of access to medical care.'

Phyu Phyu Thin was subsequently arrested, but then released following protests by the AIDS victims she had been helping, as well as an appeal from the US Government and the United Nations.

WOMEN AT THE FOREFRONT

Women have always been in the forefront of efforts in Burma to combat oppression and promote democracy, but their involvement has grown deeper and stronger since the late 1990s.

They have shown themselves ever more ready to confront the authorities and defy successive crackdowns, says The Irrawaddy news magazine.

The Forgotten Women of Burma

There are around 176 women 'political prisoners' in Burma.

They are at serious risk of torture, abuse and even rape. Many are serving life-long sentences. And many are mothers.

Women's place in the pro-democracy struggle took on new importance when thousands of Burma’s menfolk were imprisoned or forced to flee the country at the time of the 1988 uprising. With compassion and total dedication they stood by their families while reinforcing the leadership of the weakened opposition movement—a truly heroic undertaking.

“An idea or action tends to come out of a feeling or suffering,” said respected Burmese author Kyi Oo. “They [Burmese women] have faced hardships and lengthy imprisonment. Their unusual dedication and sacrifice came out of such hardships.”

The roots of women’s involvement in politics and power-wielding in Burma go very deep, reaching back several centuries.

From the 11th to the 13th century, Queen Pwa Saw’s just reign won the affection and respect of male rulers. Queen Shin Saw Pu, who ruled the Mon Kingdom from 1453 to 1472, was also famous for her effective governance.

"Burma is now in the midst of two conflicts. One is the 50-year-old civil war, raging between the Burmese military and the minority resistance forces, predominately in the eastern part of the country.

Burmese troops are raping with impunity tribal women and girls, some as young as eight years old.

Burmese soldiers use women in conflict areas as porters to carry their military equipment and supplies during the day, and use them as sex slaves at night...

The other conflict is a 20-year old war, waged by the Burmese junta against its own unarmed citizens, who are calling for freedom, justice and democracy.

Women activists are beaten, arrested, tortured and then put in prison for many years. Many female activists are mistreated and sexually assaulted by their interrogators and jailers.

Children are used as bait by the authorities to get their mothers arrested...

I hope... leaders at the UN Security Council will give consideration to Daw Aung San Suu Kyi and the women of Burma..

The appeasement policy of some bureaucrats is shameful. Effective and urgent action from the UN Security Council is necessary to help the women in Burma. No more debate. Take action."

Nilar Thein - written shortly before her imprisonment in 2008

At the start of the 20th century, the anti-colonial movement was strengthened by the participation of educated women. In 1919, female intellectuals established Burma’s first national women’s organization, Konmari, and one year later student members of the group joined in the first university boycott against the British.

Opposition to British colonialism was also the agenda of other women’s organizations, such as the Myanmar Amyothamii Konmari Athin (Burmese Women Association) and the Patriotic Women’s Association.

The National Council of Women of Burma, founded in 1931, successfully pressured the British government to admit a Burmese woman delegate to a special Burma roundtable conference in London.

The council’s choice was Mya Sein, an author, teacher and mother, known as M.A. Mya Sein because of the master of arts degree she had obtained from Oxford University. Earlier in 1931, she was selected as one of the two representatives for women across Asia for the League of Nations, the world organization that preceded the United Nations.

At the London roundtable, Mya Sein called on the British government to enact a law guaranteeing equal rights for women in Burma.

In 1953, five years after Burma gained independence, another leading woman politician, Ba Maung Chain, was chosen as a minister to represent Karen State, Burma’s first (and only) woman minister.

'Fake elections due on 7 November 2010 will bring in a constitution designed to maintain military rule,' says Burma Campaign UK.

'The dictatorship’s new constitution does not grant ethnic people any real level of autonomy, or grant any protection of ethnic cultures. Many of the largest ceasefire groups have refused the regime’s demands to become border guard forces. There is a real risk of the Burmese Army attacking ceasefire groups, resulting in a huge humanitarian and human rights crisis.'

Two former UN special rapporteurs on human rights in Myanmar have recently backed up the present Rapporteur in urging the European Union to support the establishment of a UN Commission of Inquiry to investigate war crimes and crimes against humanity in Burma.

They also urged that the EU should propose the commission in a forthcoming UN General Assembly resolution, writing:

"It is essential to send a strong message to the regime ahead of the elections that the international community will not continue to tolerate its violations of international humanitarian law and that impunity must end."

So far, 13 nations have expressed their support for the establishment of the UN Commission of Inquiry in Burma, including the United States, United Kingdom, France, Czech Republic, Slovakia, the Netherlands, Hungary, Ireland, Lithuania, Australia, New Zealand, Canada and Estonia.

EU Still to Agree to Proposal

Aung Din of the US Campaign for Burma said the European Union is the major author of the Burma draft resolution at the UN General Assembly and it has been working on a draft in Brussels since September.

"The Burmese Generals are not immune to pressure"

Pro-democracy activists including the US Campaign for Burma are pushing the EU to include the language, "calling for the secretary-general to establish a Commission of Inquiry to investigate human rights violations in Burma" in the draft resolution, which will be submitted to the UN General Assembly soon.

The European Union has not yet agreed to the proposal.

UN RESOLUTION 1325 ON WOMEN AND PEACE AND SECURITY

It also: 'Emphasises the responsibility of all States to put an end to impunity and to prosecute those responsible for genocide, crimes against humanity, war crimes including those relating to sexual violence against women and girls, and in this regard, stresses the need to exclude these crimes, where feasible from amnesty provisions.'"

Nila Thein - June 2008, from her article:
'Who will save Burma's women and children?