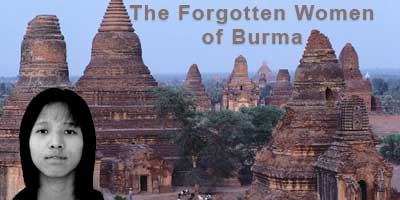 Honney Oo:  Sentenced to 9.5 Years for “Doing Something”

During August 2007, the Burmese military regime multiplied the cost of all basic fuels without prior warning, causing chaos and hardship among the public.

Despite grave risks, protestors young and old began taking to the streets.

Taking Exams, Not Taking to the Streets

Honney Oo, a 25 year old law student and member of the banned All Burma Federation of Students Union could not attend the protests as she had exams that day, yet she was arrested in early October 2007 for organizing and taking part in the demonstrations.

She was charged with sedition and received a nine-and-a-half years  prison sentence.

Honey Oo then spent the next 2 months in Building 3 of Insein Prison without charge, and on December 20, was remanded to appear in court on 19 March 2008.

During this time police allegedly tortured her to obtain a number of statements that were then falsely presented in court.

Her imprisonment without charge was illegal arrest and detention.  In court, police denied knowledge that this was illegal.

Police accusations include that Honey Oo was involved in a student union, spoke to foreign media by telephone and participated in protests at the Yuzana Plaza and on the road from Mingalar Market to Natmauk on 25-6 September 2007., and had gone for English lessons at the American Center library,

Absolutely no evidence has been produced to support any of the police claims.

Police have admitted to not understanding the law on sedition nor understanding if the case had the necessary elements to meet sedition requirements.  They have also shown little or no knowledge on the laws of evidence by tendering statements forced from Honey Oo during interrogation.

Police have not been able to pinpoint the exact times, place or other details to support their claim that Honey Oo was involved in any of the demonstrations.

An eyewitness, named as a reliable source in court, purportedly said that they had seen Honney Oo on the side of a road waving a flag during the protests and this was the reason for her arrest.

This eyewitness could not give an exact time, nor could the police corroborate an exact time through photographic or documented evidence.

Honey Oo had been taking an exam in the university that day.

After her arrest, Honney Oo’s family wrote to the director of prison administration requesting that she be allowed to sit her final exams in detention.

At this point in time, she had not been convicted of any offence.

Authorities denied permission for Honey and two other students to sit their exams.

Thus, Honney has been unable to finish her law degree.

In November 2008, Honney was transferred to Lashio prison in Northern Shan state, which is over 600 miles from her family in Rangoon.

It is believed she is still there to this day.

BURMA: Non-application of law and the cases arising from September 2007 in Myanmar