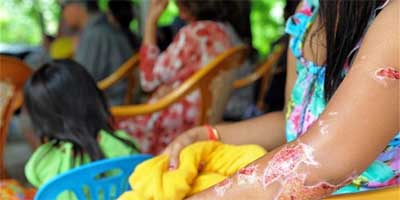 Nhem Sreyda feels fortunate that she is still able to see after being doused with acid by her ex-husband in 2012. "I am lucky that my body can still work, my eyes can still see," the 32-year-old told IRIN.

On 28 January, Phnom Penh Municipal Court sentenced Sreyda's ex-husband Be Soeun to five years in prison for intentional violence using acid and ordered him to pay 10 million riel (US$2,500), after he threw battery acid on her face, chest and back when she told him she planned to remarry.

Be Soeun was the first person prosecuted under Cambodia's acid control law - adopted in December 2011 - and received the maximum sentence, based on his charge.

"It's an indication that this sort of behaviour will not be accepted and perpetrators will be held accountable in accordance with the law," said Ziad Samman, project manager at the Cambodian Acid Survivors Charity (CASC), calling the ruling a "landmark" case.

But while activists have lauded the decision, they also feel a more robust implementation of the law is needed.

Under the law, people can also be charged with "torture and cruel acts" using acid and sentenced to 10-30 years imprisonment, while "intentional killing" with acid can carry sentences ranging from 15 years to life imprisonment.

The law would be further tested when other cases, such as those involving fatalities, go to trial, because suspects could be charged with the heaviest offences, Samman said.

Sreyda feels her ex-husband should have been sentenced to at least 10 years in prison or made to pay more, and that the law has not yet been properly enforced.

However, according to Samman, these could well be just "the tip of the iceberg" as many cases may go unreported.

"It's possible to speculate that the development of this legislation and the law being put into effect and the coverage in the media may have acted as a disincentive for would-be perpetrators, [but] I can't say for sure," he said. 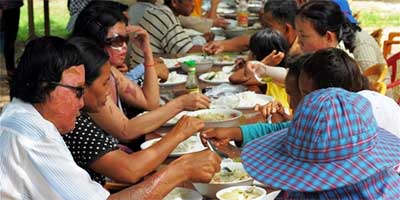 Meanwhile, key aspects of the law have yet to be put in place or adequately enforced.

For instance, a crucial and preventive sub-decree regulating the purchase and transportation of acid - cheap and readily available throughout Cambodia - has yet to be issued.

A litre of battery acid on the streets of Phnom Penh costs as little as US$1, according to CASC's Samman.

"If we have [a] sub-decree that will control the access to acid and help people to follow some conditions in order to get acid. [it] may restrict the access to acid and may contribute to the elimination of the acid crime," said Ramana Sorn, project coordinator at the Cambodian Centre for Human Rights (CCHR) who ran a project on acid violence. "People get acid very freely."

Ouk Kimlek, an under- secretary of state at the Ministry of Interior who sat on the acid law drafting committee, said the sub-decree was still being worked on, but he did not know when it would be issued.

"The government is busy right now with other tasks," he said.

Observers also say sections of the law that stipulate free treatment at health centres and state-owned health institutions, and legal support from the state for acid attack victims, have also not been put into practice.

Nhem Sreyda receives help from NGOs for medical and other treatment. "I get no help from my government," she said.

"There's still a lot of work to be done to implement the government's role," said Samman.

Ouk Kimlek said relevant ministries had been told to implement the law but he did not know if they were doing so. "Cambodia still has acid crimes. but the acid crime figures have decreased [since the law was passed]," he said.