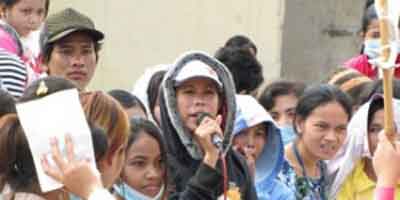 Paedophilia is Not Just a Western Problem

Sarvina, would you start by telling us a little about yourself?

I am studying for my Masters in Development Management at Norton Universit, and I live in Phnom Penh, Cambodia. I volunteer with Soroptimist International as a fund-raising officer, a correspondent for World Pulse Voices of Our Future Correspondents, and an advocate for 10x10 Girls Advocate.

Recently I have also been selected by the 10x10 Girls Education Project to work in their Documentary and Film department.

I really love my work as it enables me to understand the lives and struggles of women and girls around the world, especially in Cambodia.

All of these areas of work are providing me with the opportunities to communicate and raise awareness about issues surrounding women and girls in my country. My particular interests are in sex trafficking, education, youth, and social issues and using media as a tool for advocacy and education.

More importantly, working with Soroptimist and Worldpulse has given me a voice to talk about global concerns faced by women and girls in my society and country.

I am inspired by the work being done by grassroots women's groups which in turn is empowering me to reach my full potential.

Tell us about Soroptimist International and your role with them.

Soroptimist International is a worldwide organisation that works towards the advancement of human rights and improving the status of women and girls.

In the past year alone, 284,112 women and girls have benefited from nearly 2,300 on-the-ground projects which worked to improve access to education and provided leadership skills to the participants.

Cambodia is a developing nation where the prevalence of poverty, illiteracy and discrimination is still progressing at an alarming rate for women and girls.

Two of my projects with Soroptimist International are Breast Cancer Awareness and Education for Girls. Our goal is to provide women with free breast cancer treatment and to provide education for girls living in poverty.

Can you describe the problem of sex trafficking in Cambodia, particularly in the form of sexual exploitation?

In Cambodia, many women and girls, especially those living in rural areas, are driven into prostitution due to poverty, high unemployment rates, the lack of status of women and girls, illiteracy, inadequate law enforcement and the unavailability of trauma support.

Poverty is the main concern for the people of Cambodia. The increasing social divide and inequality between the small elite and the poor majority has created many social upheavals.

Almost half of the population in Cambodia is under the age of 20 years and the lack of education and employment has had a devastating effect on an already traumatized nation.

Many young women have fled the country in search of greener pastures, hoping for a better future in countries like Taiwan, Malaysia and Korea.  Their objective is to search for employment in order to support their families financially.

However the majority of these young women are farm workers or farmers, living in extreme poverty or facing domestic violence.

They are uneducated, with no professional experience and lacking life-skills, thus making them extremely vulnerable to danger, sex trafficking, sexual exploitation and slavery.

Modern slavery, whereby a person is under the control of another and is treated like a chattel with no pay or only the barest minimal subsistence, includes not only sex trafficking, but also forced labour among children and men.

These problems are prevalent and rampant here in Cambodia. Many poor and disadvantaged women are kept as objects, often made to work in the harshest conditions with little or no prospect of ever getting out of this situation.

What according to you are the key cause factors to the trafficking of children? Are these children sold into the sex industry?

“Western paedophiles are the low-hanging fruit. Now should come the climb up the tree to catch local sexual abusers of children.”

Poverty is almost always the main reason for the trafficking of children.

Education can help alleviate poverty but only if children are able to attend school.

Most parents cannot afford to pay for their children's education.  Those who do attend are often pulled out of school and sent to work in order to help provide for the family financially.

There are cases of children forced to become street beggars in the city.

When children are sent into the city to procure work, there is a high percentage that will end up in the sex industry due to their inability to foresee and prevent danger.

Some of them are also influenced or pressured by adults to make more money by selling their virginity.

In Cambodia children are trafficked not only into the sex industry but also into forced labour like begging and street vending.  The majority are sold into prostitution.

And do parents sell their children?

Based on my experience, most parents are conned by relatives or brokers from the criminal syndicates or traffickers, into believing that their children will receive an education in the city and be looked after by a respectable family.

Many have ended up as domestic servants, beggars for a syndicate, or as prostitutes.

But there are also some parents who sell their children into prostitution due to financial desperation caused by poverty.

I know of women who sold her daughters to local men. The girls were taken away for a month and in return, these men paid the mother $500. The girls eventually came home but continued to work as prostitutes.

Are the people in the community aware of this? Do they tolerate it?

Most people are aware that children are being sold into prostitution and will also tolerate it.

The community at large puts up with it because they see the struggle of these parents and their inability to provide for their children. Parents are also known to send their children to the borders in hope that the children will find better opportunities.

In my experience I have met Asian men who have a sexual interest in children, in particular virgins and fair-skinned girls, is this true in Cambodia?

Yes, this is a most peculiar interest of Cambodian men.

They believe that sleeping with virgins will enhance their sexual virility, the younger the child, the better.

Virginity is very much prized. Local men believe that virgins are free from sexual disease and have the ability to protect them from contracting AIDS.

It is usually the rich and the powerful that have the financial ability to buy virgins for sex. Likewise, fair-skinned girls are considered attractive and prized.

Studies conducted by ECPAT and local NGOs show that the majority of customers buying sex from children in Cambodia are local men.  Do you agree?

Yes I do. There are more than 200 NGOs, INGO, donors and government agencies working together on the issue of trafficking and sexual exploitation here in Cambodia.

According to ECPAT Cambodia's survey, local demand for commercial sex in Cambodia is estimated between 49% and 70%, with a high demand for virgins.

Cambodian men are fuelling the flow of underage girls joining the sex trade.

This is a concern for us that the local men are buying sex from children under the age of 18 years.

Based on reports I have read through the media and the local NGOs, namely End Child Prostitution, Abuse, Trafficking in Cambodia, Commercial Sexual Exploitation of Children and Cambodia's Women Crisis Centre, the local and regional demand for child prostitutes is greater than that of Western tourists coming into Cambodia.

Here in the west, we have read reports on foreign men arrested for procuring sex from children, yet nothing about local men. Do they generally go unpunished?

Only a small percentage of local men involved in prostitution with children are arrested or charged, and based on what I have seen, the law enforcement, especially in the area of trafficking, generally targets foreigners.

The local men seek out sex workers who are under the age of 18 years in various establishments.

The government must do more to tighten the law to punish those who buy sex from children in bars, brothels, massage parlours, restaurants, beer gardens and Karaoke clubs.

Is there a legislation to prevent children from being trafficked and sold into prostitution? What are the challenges in addressing this issue locally?

Yes, there is legislation and the government is also trying to strengthen law enforcement to combat the problem. The problems and challenges for the authorities arise due to corruption and weaknesses in law enforcement, and a lack of awareness about the law on commercial sexual exploitation of children.

Culturally, Cambodians view sex as a taboo subject and it is hardly discussed publicly or privately. Sex education is largely absent from the school's curriculum.

The government is also trying to tackle the issue of unsafe cross border migration.

Efforts have been made to strengthen the law to punish those buying children under 18 years of age but unfortunately, corruption is widespread along the borders thus making the job of policing very difficult.

A more vigorous and effective law enforcement is needed, combined with education and a greater vigilance to fight trafficking.

The community at large needs to be more concerned with this issue and the plight of the children.

Are there information, awareness-raising and educational programmes to help people, including parent, understand the danger of sex trafficking?

Yes, there is information provided by local NGOs to raise awareness and educate people.

Soroptimist is currently making plans to create programmes to reach out to the Cambodian community, and to help people understand the danger of sex trafficking and how it can be prevented. The work being done by Soroptimist is challenging, but it has benefited many women and girls in Cambodia.

The work you do is emotional and very real, how does it affect you as a woman?

My work has given me the opportunity to witness the problems faced by women and girls daily but, more importantly, it empowers me to reach out to them and be a part of the process of helping to prevent sex trafficking.

I truly believe that education plays an important role in the prevention of human trafficking.

I am grateful for the opportunities that my parents have given me so it is my desire to see the children in my country have the same rights to education, especially families living in poorer communities.

I am happy to help others and hopefully be able to make a difference with the work I do.