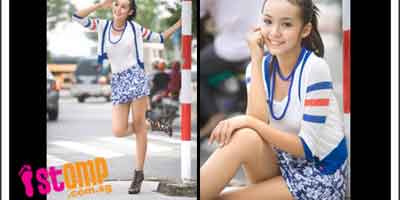 "I grew up in SE Asia so I can say that it is very much an open secret that the Asian sex industry tends to target young girls, especially fair-skinned girls."

Many NGOs and child protection agencies based in Asia or internally have ignored or overlooked this issue.

All fine and well to stop children from being used in the sex industry and to stop foreign men from buying sex from a child, but the problem remains when there is a demand locally.

At 12 years old, Vietnamese model Le Hoang Bao Tran is an overnight internet sensation.
Since her win, her pictures have been making waves on the Internet, earning her legions of fans...

A fact: Many Cambodians and Burmese sell their children into forced labour and the sex trade due to poverty.

The local authorities have not done anything to prevent this because of corruption and greed. Not forgetting the criminal organizations involved as well.

The price of virginity

A child's virginity is prized in Asia and can be sold for quite a lot of money.
Of course the children involved will not see any of the money.

The unsafe cross border migration has also caused many problems.

We can work the maths out ourselves. Just how many foreigners are living in these countries compared to the number of local men?

There must be legislations to incriminate locals who procure sex from children.

Until the governing officials, NGOs, child protection agencies start working together to combat this, the problem will still remain. It needs to be addressed locally.

Adverts put pressure on Asian girls to be whiter!

Work needs to be done on the governments too. Many of these countries have a government that is composed of men.

Having said that, local men do not necessarily have to buy sex from young children.

Many are also known to 'keep' mistresses who are underage.

That in itself is also another form of buying sex/favours from a child.

Debates and discussions are necessary and education plays a big role too.

How do you educate people living in a country where the vast majority are living in acute poverty, with no access to choices, rights and opportunities?

And are vulnerable to abuse from governing officials and criminal activities?

My grandmother was sold by a care home at age 14

My grandmother married my grandfather when she was 14 years old.

He paid for her and took her home.

She just turned 15 when my father, her first child was born.
She subsequently went on to have 6 more.

My grandfather in the meantime started accumulating more young women."