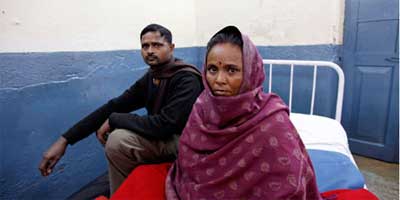 Sterilisation remains the most common method of family planning in India's bid to curb its burgeoning population of 1.2 billion. | Photo: Mustafa Quraishi/AP

Tens of millions of pounds of UK aid money have been spent on a programme that has forcibly sterilised Indian women and men, the Observer has learned. Many have died as a result of botched operations, while others have been left bleeding and in agony. A number of pregnant women selected for sterilisation suffered miscarriages and lost their babies.

The UK agreed to give India £166m to fund the programme, despite allegations that the money would be used to sterilise the poor in an attempt to curb the country's burgeoning population of 1.2 billion people.

Sterilisation has been mired in controversy for years. With officials and doctors paid a bonus for every operation, poor and little-educated men and women in rural areas are routinely rounded up and sterilised without having a chance to object. Activists say some are told they are going to health camps for operations that will improve their general wellbeing and only discover the truth after going under the knife.

Court documents filed in India earlier this month claim that many victims have been left in pain, with little or no aftercare. Across the country, there have been numerous reports of deaths and of pregnant women suffering miscarriages after being selected for sterilisation without being warned that they would lose their unborn babies.

Yet a working paper published by the UK's Department for International Development in 2010 cited the need to fight climate change as one of the key reasons for pressing ahead with such programmes. The document argued that reducing population numbers would cut greenhouse gases, although it warned that there were "complex human rights and ethical issues" involved in forced population control.

The latest allegations centre on the states of Madhya Pradesh and Bihar, both targeted by the UK government for aid after a review of funding last year. In February, the chief minister of Madhya Pradesh had to publicly warn off his officials after widespread reports of forced sterilisation. A few days later, 35-year-old Rekha Wasnik bled to death in the state after doctors sterilised her. The wife of a poor labourer, she was pregnant with twins at the time. She began bleeding on the operating table and a postmortem cited the operation as the cause of death.

Earlier this month, India's supreme court heard how a surgeon operating in a school building in the Araria district of Bihar in January carried out 53 operations in two hours, assisted by unqualified staff, with no access to running water or equipment to clean the operating equipment. A video shot by activists shows filthy conditions and women lying on the straw-covered ground.

Human rights campaigner Devika Biswas told the court that "inhuman sterilisations, particularly in rural areas, continue with reckless disregard for the lives of poor women". Biswas said 53 poor and low-caste women were rounded up and sterilised in operations carried out by torchlight that left three bleeding profusely and led to one woman who was three months pregnant miscarrying. "After the surgeries, all 53 women were crying out in pain. Though they were in desperate need of medical care, no one came to assist them," she said.

The court gave the national and state governments two months to respond to the allegations.

Activists say that it is India's poor – and particularly tribal people – who are most frequently targeted and who are most vulnerable to pressure to be sterilised. They claim that people have been threatened with losing their ration cards if they do not undergo operations, or bribed with as little as 600 rupees (£7.34) and a sari. Some states run lotteries in which people can win cars and fridges if they agree to be sterilised.

Despite the controversy, an Indian government report shows that sterilisation remains the most common method of family planning used in its Reproductive and Child Health Programme Phase II, launched in 2005 with £166m of UK funding. According to the DfID, the UK is committed to the project until next year and has spent £34m in 2011-12. Most of the money – £162m – has been paid out, but no special conditions have been placed on the funding.

Funding varies from state to state, but in Bihar private clinics receive 1,500 rupees for every sterilisation, with a bonus of 500 rupees a patient if they carry out more than 30 operations on a particular day. NGO workers who convince people to have the operations receive 150 rupees a person, while doctors get 75 rupees for each patient.

Half a million sterilisations in 2009

A 2009 Indian government report said that nearly half a million sterilisations had been carried out the previous year but warned of problems with quality control and financial management.

In 2006, India's ministry of health and family welfare published a report into sterilisation, which warned of growing concerns, and the following year an Indian government audit of the programme warned of continuing problems with sterilisation camps. "Quality of sterilisation services in the camps is a matter of concern," it said. It also said the quality of services was affected because much of the work was crammed into the final part of the financial year.

When it announced changes to aid for India last year, the DfID promised to improve the lives of more than 10 million poor women and girls. It said: "We condemn forced sterilisation and have taken steps to ensure that not a penny of UK aid could support it. The UK does not fund sterilisation centres anywhere.

"The coalition government has completely changed the way that aid is spent in India to focus on three of the poorest states, and our support for this programme is about to end as part of that change. Giving women access to family planning, no matter where they live or how poor they are, is a fundamental tenet of the coalition's international development policy."

Devika Biswas has been working as a health rights activist with the Bihar Voluntary Health Association since 1989.

She has published articles on the two-child norm in the book, Empowerment and Coercion, and on the conditions of health scenario from citizens’ perspective (published by the Centre for Health and Social Justice, New Delhi).

In 2011, the Petitioner Ms Biswas carried out a Rapid Assessment of the Health Programme in Bihar (forthcoming publication by CHSJ in Collaboration with SRM University, Chennai, UNFPA, ND).

After  a fact-finding mission on in her native district of Araria, Ms. Biswas filed a petition with the Supreme Court of India to ensure that sterilizations nation-wide are conducted as per the legal norms and to see that the victims in Bihar receive compensation for their injuries.