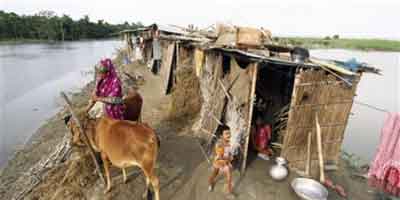 A woman affected by floods feeds her cattle at a temporary shelter on an embankment in Pazarbhanga village in Barpeta district, in the northeastern Indian state of Assam, July 12, 2012. | Photo: REUTERS/Utpal Baruah

India's annual monsoon has claimed 109 lives since rains started in June and left at least 400,000 people homeless in the northeastern state of Assam, in a tragedy experts say was made worse by corruption and poor management of the Brahmaputra River.

A senior member of the Assam Human Rights Commission, a government body, told Reuters it suspects millions of dollars meant for flood control have been siphoned off by state water department officials in the last five years. The commission has demanded a high-level investigation by the government.

Prime Minister Manmohan Singh, who represents Assam in the upper house of parliament, called the floods the worst in recent times and promised $1,800 to each victim's family in compensation. Critics say that much of the money will evaporate.

"Corruption is rampant before and after a flood," said Arup Misra, a prominent environmental activist in the state and a professor at Assam Engineering College. "Some officials eagerly wait for floods as they could make money on repairing of embankments and relief distribution."

Over the past 60 years successive governments have built levees along most of the length of the volatile Brahmaputra, which is Assam's main river and is fed by Himalayan snow melt and some of the world's heaviest rainfall. Experts say these embankments are both criminally under-maintained and a discredited form of flood management.

Assam is famed as a tea-growing region and rich in oil and timber. It is also home to the Kaziranga National Park that hosts two-thirds of the world's Great One-horned Rhinoceroses.

Nearly a decade ago, Hannan Sikdar's father lost his home and farm to floods in Assam. On June 28, the same fate struck Sikdar and his family of 10 when the Brahmaputra b u rst through a dike and swept away their home and everything they owned in the middle of the night.

Assam's population is on the rise, and like millions of others, Sikdar lived in a danger zone right next to the river's mud embankment. Millions of dollars were assigned to keep levees in good shape. But in eight years living there, Sikdar says nobody even came to talk about the risks.

"This was the place where we made our home when my father lost his property several years ago," said the 30-year-old, looking down at the wreckage of his bamboo and wood house from a new makeshift hut further along the embankment.

"We were never told that this embankment could break."

Rajiv Sinha, an expert on river dynamics, said the levees prevent the river from spreading silt in its natural flood plain, causing the river to clog up and increasing the frequency and intensity of floods. Similar embankments downstream in Bangladesh have also been blamed for devastating flooding.

"In the last fifty years, two things have happened -- the expenditure on flood control has increased tremendously, and at the same time the damage caused by floods has also increased exponentially," said Sinha, who teaches geosciences at the Indian Institute of Technology in Kanpur.

Globally, flood management trends are moving away from levee-type measures to natural storage areas such as swamps and wetlands. But Assam has failed to come up with any modern, long-term plan to harness the river.

Entire villages, such as the one Sikdar belonged to, have cropped up in flood-prone areas and their only layer of protection is a neglected, crumbling mud wall.

As heavy rains continue, officials fear a second spell of floods soon, but victims such as Hanan Sikdar continue to live in tiny straw and tin shelters next to the broad river.

"People are living in danger zones out of compulsion," said Chandan Talukdar relief worker w ith Sikdar. "Till alternative land is found, these people will remain on embankments."