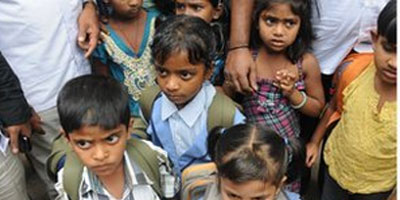 Officials in India are investigating claims that staff at a private school deliberately humiliated poorer children it was legally obliged to take in.

Parents of four children at the school in Bangalore complained that staff cut off tufts of their hair and denied them the same uniform as other students.

The children are reportedly from low-caste Hindu communities, enrolled under a recent anti-discrimination law.

There has been no response so far from the school itself.

A senior official in the Karnataka state department of education, Kumar Nayak, told the BBC that an inquiry was under way.

"Necessary action will be taken if the charge is proved," he said.

State Primary Education Minister Vishweshwara Hegde Kageri told reporters the incident was "intolerable" and threatened legal action once officials had reported back to him.

Indian schools are supposed to reserve up to a quarter of their places for children from poorer backgrounds.

But the BBC's Andrew North in Delhi says many institutions oppose what is known as the Right to Education quota.

Dalit activists are demanding action be taken against the Oxford School, which is at the centre of the row.

"The government did not do anything despite our complaints. This is a shame," said D Narayana, president of the Dalita Samarajya Staphene Samiti campaign group.

"They [the children] were made to stand separately during assembly and they were forced to sit in the back benches of the class."

Mr Narayana and his group say discrimination has been widespread in most private schools ever since the Right to Education law was passed last year.

"This is not an isolated incident. Students are being humiliated everywhere," Mr Narayana said.

Nayaz Pasha, a parent of one of the children allegedly humiliated, said the school management claimed that other children might have cut off their children's hair.

"But we don't believe it. Our children are openly discriminated against. They have not been given neck ties or belts like other children," he said.

In Karnataka, more than 1,000 schools are on a week-long strike protesting against the implementation of the 25% quota under the Right to Education Act.