A Bollywood megastar is making India confront its dark side 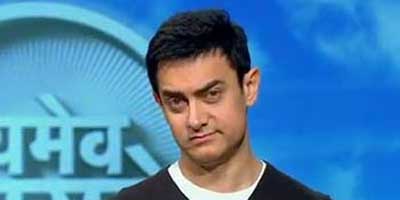 Bollywood megastar is making India confront its dark side

Shining light on inequities like the rampant abortion of female fetuses, caste discrimination and the slaying of brides in dowry disputes, actor Aamir Khan has reached an estimated one-third of the country with a TV talk show that tackles persistent flaws of modern India that many of its citizens would prefer to ignore.

"Satyamev Jayate", or "Truth Alone Prevails," is a clever blend of hard news and raw emotional appeal - part "60 Minutes," part Oprah Winfrey. Its influence has even prodded the notoriously lethargic government machinery into action, though it's too soon to know what policy changes may be in the works.

After an episode exposed rampant medical malpractice and championed giving cheap, generic medicine to millions of India's poor, Khan was invited to address a Parliament hearing on health care.

Hard-hitting talk shows are rare and certainly none has acquired even a fraction of the popularity and buzz Khan's has generated since it debuted 11 weeks ago. And Bollywood superstars have ventured into television only to host glitzy game or reality shows.

For many middle-class Indians - comfortable in their belief that their country had moved beyond most of these problems - Khan's show has been a gut-wrenching and poignant dose of bitter reality.

"Definitely it's reminding people that there are problems within our society," said Narendra Kumar, an environmental researcher in New Delhi. "It's also creating discussions and sometimes helping people find solutions to the problems."

The show forced Paromita Dey to confront an act she had tried to bury.

Four years ago, Dey and her husband Souporno - already parents to a teenage daughter - ended a pregnancy because she was carrying another girl. Like millions of Indian families, they wanted a son.

In the opening episode of Khan's program in May, Ameesha Yagnik haltingly recalled how her husband forced her to abort six female fetuses in eight years. How he threw her out of the house but refused to let her meet her infant daughter for months until she agreed to divorce him.

Both Khan and his audience were in tears.

So were the Deys when they watched the show.

"Yes, I killed my baby because she was a girl," a shaken Paromita Dey said, sitting in her home in a posh neighborhood in the northern city of Lucknow.

That India's highly skewed gender ratio is a cause for concern isn't new. Census after census has revealed that fewer and fewer girls are being born, despite strict laws against sex-selective abortions and a slew of failed government incentives and programs.

Yet Khan's show created such an outpouring of outrage that the government of the western state of Rajasthan, with one of the worst gender ratios, promised action, and a village head there formed a committee to check against the practice.

"It's both ironic and amusing that it took an actor from Bollywood to shine a light on the yawning gaps in Indian journalism," political commentator Tavleen Singh wrote in a recent column.

The show has done "what us hacks should have been doing over and over again," she wrote.

Khan, 47, began his career in Bollywood as a romantic hero in the late 1980s. But over the last decade he has broken new ground in Bollywood, fashioning a career path combining the social consciousness of George Clooney with the hero appeal of Tom Cruise.

Now one of the industry's very biggest stars, he has the cachet to push through any project he chooses. He produced, directed and acted in a film about the journey of a misunderstood dyslexic child. His film "3 Idiots" examined the sorry state of India's education system. He's thrown his weight behind social causes - joining anti-dam protesters and embracing an anti-corruption activist. The talk show has cemented his status as Bollywood's first true activist-star.

Khan initially was asked to host a TV game show. He refused.

"I want to do something dynamically different," he told Open magazine. "I continued to think about it, and slowly this idea was conceived."

"Satyamev Jayate" has tackled many horrors unique to India: the torture and murder of young brides for bringing insufficient dowries to their in-laws; the shunning and degradation of those at the bottom of Hinduism's caste hierarchy.

Others are more universal - alcoholism and child sexual abuse - but made worse by a conservative culture unwilling to deal with them.

The program is broadcast on several networks estimated to reach about 400 million people in India. Since its debut, more than 13 million people have posted suggestions and messages of support on the show's website. The alcohol abuse episode sent 60,000 phone calls flooding the Alcoholics Anonymous helpline, said the show's co-director Svati Chakravarty.

"It was unprecedented in the history of AA worldwide."

Stalin K, a rights activist and documentary filmmaker who appeared in the caste episode, said none of the issues raised were new, but that Khan's show was giving them far more attention than the glancing treatment they usually get in India's media.

"It's a different level of engagement," he said. "The conversations are much deeper."

Khan's reputation as a thinking person's superstar adds to the show's credibility, but for the most part he keeps to the background - only speaking when someone looks lost for words or to explain something to his audience.

In a recent episode, Khan interviewed a university professor who had battled years of discrimination for being a dalit - the lowest Hindu caste. Kaushal Panwar spoke about being taunted in her village school, about not being allowed to drink water from the same clay pot as upper caste children.

Khan interjected only a few times, mostly to give Panwar time to hold back her tears, and once to admonish his audience and viewers that "if I believe an accident of birth makes me superior to you, that is a mental illness."

It remains to be seen whether the show's momentum can translate into substantial reforms. But Stalin says Khan's work is vitally important.

"This amount of discussion in such a short amount of time is unprecedented," he said.