India's Gandhi calls for strict punishment after spate of rapes 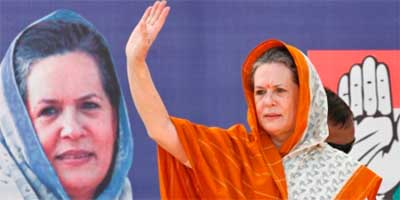 India's most powerful politician, Sonia Gandhi, has called for strict punishment for rapists following a spate of rapes in the country, including that of a girl who killed herself after she was forced to have sex with three men.

Thirteen rapes have been reported in the last 30 days in India's northern state of Haryana - a rich, agricultural region bordering New Delhi - where deep-rooted conservative and patriarchal attitudes have often been blamed for gender crimes.

At the weekend, a 16-year-old low-caste girl doused herself in kerosene and burned to death after three men dragged her inside a house in Haryana's Jind district and gang-raped her. The men have been arrested.

"I know that these kinds of crimes are increasing, not just in Haryana, but also in other states," Gandhi, head of the ruling Congress party, told reporters on Tuesday after visiting the dead girl’s family.

"I strongly condemn such crimes. I believe those who are guilty should get strict punishment."

The spate of shocking rapes in Haryana - including several gang-rapes of girls and women from low-caste communities by upper-caste men - has hit local media headlines in recent weeks.

Last month, the father of one victim committed suicide by drinking poison after perpetrators threatened to circulate a video of the rape of his daughter on their cell phones if he went to the police. Earlier this month, a mentally challenged woman was lured into a field by a man and raped.

Opposition politicians have used the crimes in Haryana - a state ruled locally by Gandhi's Congress party - to criticise the government and police over inaction on rising gender violence. But some local Congress leaders have brushed off the rapes as a political conspiracy by the opposition.

A RAPE EVERY 20 MINUTES

Indian women face a multitude of threats, from illegal abortions of female foetuses due to a preference for sons, to the murders of brides by in-laws for want of more dowry, child marriage and human trafficking.

One women is raped every 20 minutes in India, according to the National Crime Records Bureau, which reported 24,206 rapes in 2011 - an almost 10 percent rise over the previous year.

But gender rights activists say even those figures are a gross under-exaggeration, with most victims unwilling to report the crime out of fear it will bring dishonour on their families.

Gender abuses are more common across India's conservative northern belt - which includes Haryana, Uttar Pradesh, Punjab and Bihar - largely due a deep-rooted mindset that women are inferior and must be restricted to the role of homemakers.

Age-old customs, such as payment of large marriage dowries to a husband’s family and beliefs linking a woman’s sexual behaviour to family honour, have made girls seem a burden rather than an asset, lowering their status in society.

In fact, some Khap Panchayat leaders in Haryana have responded to the recent rapes by demanding that the age of marriage be lowered to 16 years from 18, saying it would stop boys and girls "straying" and prevent rapes.

When questioned by reporters, Gandhi dismissed the idea, saying legal decisions could not be determined by village leaders.

"We have a democratic system here. We have a judiciary. The law is in the hands of the judiciary and of nobody else," she said.