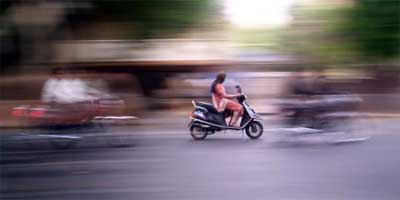 Tired of unsafe and slow public transportation, girls in Kashmir are getting their own wheels. Scootys, an Indian-manufactured motorized two-wheeler, is marketed directly to girls. As a result, sales are on the rise. Local banks have even introduced financing plans to help girls buy scooters. Girls say commuting and helping their families with errands has never been easier or more fun.

SRINAGAR, KASHMIR, INDIA – Priya Mahajan, 25, has been riding a Scooty – a gearless, motorized two-wheeler – for the last nine years. A project assistant at the Regional Research Laboratory, she received the vehicle as a gift from her uncle to get to tutoring sessions during high school.

“When I was in 11 th standard, my uncle who lives in U.S. gifted me this Scooty,” Mahajan says. “He sensed I needed it the most, as I had to go to multiple tuitions and coaching for different subjects. It was convenient, and I was no longer dependent on anyone.”

Mahajan say that riding a scooter in Jammu, the winter capital of Indian-administered Jammu and Kashmir state, was already widely accepted when she was a teenager. But the same acceptance did not extend to the summer capital of Srinagar, which lies in the relatively conservative Muslim-dominated Kashmir Valley.

But today, scooters are becoming an essential requirement for commuting there too, especially for working women, Mahajan says. It is easier to drive when navigating narrow roads, and because Mahajan lives alone, she says that it is no longer a problem if she has to stay late at her office because she doesn’t need a ride home.

“Scooty sets me free,” Mahajan says. “I no longer depend on anyone.”

With her Scooty, she says she can help her family too.

“I can even help my family,” she says. “I take my mother out to the market.”

Things are changing in the Kashmir Valley, with a sudden increase in the number of girls and women using scooters as their main form of transportation. Independence, the ease of getting to tutoring sessions and the ability to help their families has made scooters popular with schoolgirls and even working women. Scooters also enable girls to avoid overcrowding and sexual harassment on public transportation. Sociologists link the trend to expanding gender roles for women here.

Scooty is an Indian brand of scooters manufactured by TVS Motor Company. Designed for girls and women, it’s the best-selling scooter brand and has come to represent a generic name for any female's two-wheeler in India.

Other motorcycle manufacturers have also unveiled scooter models marketed at young Indian women, such as Yamaha with its Ray model in 2012.

The rising number of applicants for motorbike licenses also shows the popularity of scooters.

The first woman to obtain a license for a gearless motorcycle like a scooter in Kashmir did so in 2009, according to the Regional Transport Office of Srinagar. In 2009, 50 women obtained licenses under this category, while in 2011 the number rose to 488.

Sana Yaqoob, 18, obtained her Scooty in March 2011. The student says that it saves her a lot of time.

“I live in a residential colony in interiors of Srinagar, which means a lot of time lost in commuting,” she says.  “But now I can go anywhere.”

Yaqoob says she feels lucky that her family supports her scootering.

“They feel nice about it and want me to be independent,” she says. “My parents are supporting me to stand by my own and do not want me to be dependent.”

Nida-ul-Islam, 20, received a scooter as a gift from her parents when she qualified for her higher secondary examination. She says the scooter has boosted her confidence and that her parental support means everything when it comes to encouraging independence.

“Scooty has made my life comfortable, easy and has reduced my workload,” she says.

Nayrah Nisar, 17, got a Scooty after finishing high school, and her brother helped her to learn how to drive it.

“Traveling is no longer a boring and tiring experience as earlier,” Nisar says.

“I can help my friends and family to reach a destination,” Nisar says.

Sajad Sadaf, 12, says she and her best friend got Scootys together last year. They now occasionally drive to school together.

“Why should boys have all the fun?” Sajad quips, quoting the punch line of a TV commercial of the popular Scooty brand.

She is aware that she is well below the legal driving age of 18, but she says her mother is encouraging. Still, her father is apprehensive, as driving by a minor is an offense.

“Whenever I go out on Scooty, my father says no, but I manage to get permission,” Sajad says, giggling. “I tell my daddy this is the last time, but the last time never comes.”

Others say that scooters are a solution to complaints of overcrowding and sexual harassment of girls on public transportation.

Sajad uses the school bus when she doesn’t drive her Scooty, but she says she is afraid of public transportation.

“There are strangers all around you in a local bus, and there is so much overcrowding,” she says. “Traveling by a Scooty is so much easier and more convenient.”

Ruhi Jan, a computer engineer, agrees that scooters are safer for girls than public transportation.

“In buses, there is harassment in some way, touching, intentional or unintentional especially of school girls,” Jan says. “Then there are boys following girls, even teasing. Scooty helps in avoiding all this. Moreover, girls can go anywhere, especially to tuitions, where there is specific timing easily and comfortably.”

“The buses are always overcrowded, and there is so much pushing and touching,” she says. “And it is really difficult for girls to raise a voice, especially against the older men.”

“Introduction of this product was driven by business objectives as well as our obligations under social responsibility,” says Layek Ahmad Jan, a strategy and business development executive at J&K Bank.

He says the scheme aims to tap the specific market of working women and young female students, which has been growing rapidly across the country.

“From a social aspect, we desired to facilitate the purchase of the Scootys by females to free them from the innumerable troubles associated with public transport system,” he says.

Since the launch of the program, J&K Bank has financed 202 scooters for 202 women at a fixed interest rate of 13 percent.

Bashir Ahmad Dabla, a sociology professor at the University of Kashmir, links the growing trend of women using scooters to expanding gender roles in society.

“With increased education, employment, better economic conditions, women are adopting new roles, different from the traditional ones,” he says. “They are venturing into new fields, unconventional areas. Women in Kashmir are working as sales girls, airport staff or with music, areas they didn’t venture into earlier.”

In the process, Dabla says they are adopting innovative things like scooters in response to the changes in environment around them.

“They are realizing their strengths and abilities,” he says.