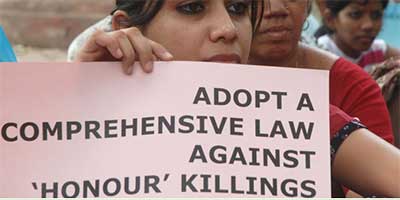 The public beheading of a woman by her brother in Kolkata highlights a surge in so-called 'honour killings'.

The policeman jumped to his feet as the man walked into the station and placed the head of his sister, along with the butcher knife that decapitated her, on the table in front of him.

The incident in Kolkata on December 7 was another killing in the name of "honour" and there has been a surge in such attacks over the past several months.

Nilofar Bibi, 22, was only 14 years old when she left home in an arranged marriage. Alleging torture carried out by her in-laws, Bibi returned to her parents on November 28, but vanished days later.

Her brother, Mehtab Alam, 29, had discovered his sister was living with an old boyfriend, Firoz, an auto-rickshaw driver. Alam stormed into the home and dragged Bibi onto the street in broad daylight.

Passers-by looked on in horror as he cut off Bibi's head while saying "she had sinned and had to be punished".

Alam left his sister's body in a pool of blood on the road, and calmly walked to the police station, her head in hand, to surrender himself. The siblings' family expressed support for Alam, saying they were proud he upheld their honour.

In a country currently caught up in collective outrage over a gang rape of a medical student in New Delhi, Bibi's killing registered only a passing reference in the national media.

But the coverage - or the lack of it - failed to hide the true extent of a scourge that bedevils many Indian women.

In a similar incident, a 17-year-old girl, a resident of Khoraon village, Kaushambi in Uttar Pradesh, was hacked to death by her father for having an affair with a 20-year-old from another religion from the same village, on December 24.

In the south, a 19-year-old woman in Sangameshwar village in Dharward, Karnataka, was allegedly killed and burnt by her parents on December 23.

Killed in the name of 'honour'

"Honour killings" are traditionally associated with developing countries with significant Muslim populations, and India has been no exception.

"Killing is killing. It is unconstitutional and illegal, it's an offence. There is no 'honour' in killing," Nirmala Samant Prabhavalkar, a member of India's National Commission for Women (NCW), told Al Jazeera.

Madhu Purnima Kishwar, founder of women's rights organisation Manushi, told Al Jazeera part of the problem is the language used to describe murder by family members, with women most often the victims.

The term "honour killing" is meant to make the crime appear exotic, as something that happens only in the "uncivilised" non-Western societies, Kishwar said.

"For example, when a jealous husband murders his wife in New York because he suspects her of having an affair, no one calls it 'jealousy murder'. In fact, that also could well be called an 'honour killing'," said Kishwar.

She said the legal systems in many countries take a lenient view of such killings and treat them as "less serious" or "more justified" than other murders.

Filmmaker Jean Claude Codsi recently screened his movie A Man of Honor at the Cairo International Film Festival. He noted it is hard to get actual figures on the number of such murders globally.

"It is very difficult to work out the magnitude and number of the 'honour killings', as they are often disguised as accidents or suicides," said Codsi.

He told Al Jazeera sexual deviance in families sometimes plays a role in the violence. "Often there are dark tales of incest behind the killings," Codsi said.

A 2000 United Nations study estimated there are more than 5,000 "honour killings" worldwide each year. The National Commission for Women in India said it investigates 70-80 possible cases a month.

"Though it is difficult to say how many are related to honour killings, a sizeable number is obvious," Prabhavalkar said.

India's Law Commission proposed legislation in 2011 allowing for the prosecution of family members involved in "honour killings". It recommended making it a non-bailable offence, but disagreed with Supreme Court's suggestion that the death sentence be applied to all such cases.

Women's rights activists criticise the role of local village councils known as khap panchayats who can rule on domestic disputes.

In one case in 2007, a khap head in Punjab was said to have encouraged the killing of a couple because they were from the same gotra, or clan, which the khap had prohibited.

The effectiveness of these councils in protecting the rights of women has been questioned. "These panchayats are not constitutional bodies. They are meant to settle disputes amicably. They cannot act like police or judiciary," Prabhavalkar said.

Women's rights activists say Indian police are not doing enough to tackle the problem of "honour killings". Timely intervention by authorities could prevent many deaths, they say. "Many times, police do not take complaints by the victims seriously," Prabhavalkar said. "They do not provide protection to victims, which in turn boosts up the morale of culprits. They take law in their hands."

Several attempts by Al Jazeera to get a response from top police officials in Haryana state - notorious for 'honour killings' - failed.

The law does catch up with those guilty of "honour killings" occasionally.

This month, a court in Punjab sentenced three people, including a woman, to death for "honour killing" a young couple. Paramjit Kaur, the mother of the slain woman, and her two relatives had killed Rakesh Kumar and Pooja in Ferozepur district, Punjab, two years ago.

And this July, a local court in Lucknow handed down the death penalty to seven members of a family for a 2006 "honour killing".

In August, a court in Sonipat in Haryana state imprisoned for life a woman and her two sons for killing her 12-year-old daughter and 14-year-old niece.

Chanchal and her cousin Raj Kumari were killed after their grandmother caught them with their 16-year-old cousin about two years ago. The "affair'' infuriated Vidya Devi, Raj Kumari's mother, and her two sons - Chand Varma and Suraj Varma - who took the girls to a secluded place and strangled them to death. They then threw their bodies into a canal near Badwasni village in Sonipat on June 26, 2010.

Sociologists and activists blame the killings to warped mindsets, as showcased by a recent ban imposed by village elders in the eastern state of Bihar on the use of mobile phones by women. The elders of Sunderbari village announced a $180 fine if a single women or girl is caught using a cell phone, saying the technology spurred sexual relationships, even extramrital affairs.

Manuwar Alam heads a newly formed committee tasked with enforcing the ban. He said mobiles were "debasing the social atmosphere".

"Even married women were deserting their husbands to elope with lovers. That was shameful for us," Alam said. "So, we decided to tackle it firmly."

It was not the first time in India that village councils have banned women from publicly using mobile phones. A similar prohibition was imposed in August for girls below age 18 in Udaipurwati in Rajasthan state.

In July, a female phone ban was ordered on the streets of Baghpat district in Uttar Pradesh state.

Activist Kishwar admits parents and relatives have the right to be concerned about girls in the family. "We should avoid attacking people in different cultures without understanding the specific complexities of the situation," she says.

Understanding the male mindset should obviously be the first step. But as Prabhavalkar says, perhaps the most necessary move is establishing gender sesitivity in Indian society.

"This will do wonders in the long run," she says. And hopefully, "honour killings" will no more besmirch India's reputation.