Rape in India: Where have the men been? 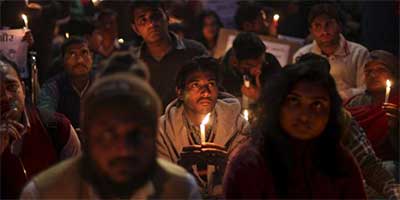 Rape in India: Where have the men been?

It is encouraging to see young men on the street against the recent gang-rape. After all, they would also have to play an important role to achieve a gender-just society. Can we call it a much-needed start? Sangeeta Barooah Pisharoty talks to some observers

Another rape case, and the first question that lingered in my mind, (I am sure in many others too) was: will reactions to this one be any different?

Will it not be a replay of similar reports and images in the media (typically a clutch of women mobilised by activists holding banners reading like, “We are not just bodies”) and the same old sound bytes (law and order is not with the Delhi Government; girls should be more careful at night; beat policing needs to be strengthened)?

And the politicos in the opposition? Will they come out any better (“The present government has failed to provide security, therefore it should resign”)? What about the law? Will it not fail the victim yet again?

Ultimately, what about the society? What about its majority members, the men folk?

No, don’t get me wrong. Most men don’t commit rape, don’t support it. Along with the victims, there are many brothers, sons and fathers who are suffering. What one asks here is, why then are men almost not seen fighting it more openly, more overtly? With the protest against the recent Delhi gang-rape case mounting, one however has seen a different media image, that of young men taking to the streets protesting vehemently against the heinous act. Alongside women. Sincerely, ask yourself, is it not for the first time in Delhi’s recent history you have seen men in newspaper photographs protesting against rape?

These photographs are a good sign; a much-needed beginning. Is it not the way it should be, if we want to live in a civilised, gender-just society? “Though this is not a representative sample, I would say we have reason to hope that the future will be more sensitive about women. A lot of young men and boys have come out in protest from the colleges and universities this time. This means, they are getting to understand the inequalities,” says women’s rights activist Ranjana Kumari. In many other protests against sexual assault, she says, “We have to go to the bastis to mobilise women to come out to the street. This time though, there are young men, from universities like JNU and Delhi University, who have taken it on themselves to get people to protest.”

So can we call it the beginning of a visible shift? Sociologist Dipankar Gupta sees it differently. “There is a response from more men this time because of the gravity of the attack; the girl was badly hurt, this has stirred people deeply, including the urban underclass.” Men reacting against a case of rape, he underlines, is different from reacting to a gang-rape, a group act. “Look at the Guwahati incident, so many men spoke against it. A gang act is looked at differently from any other rape case. To some extent, such acts are seen separately from women’s issues in general.” He points out that “media, activists, sociologists, thinkers, will have to play a sustained role to cause a bigger change.”

Here, Om Prasad, president, All India Students’ Association, an organiser of the protests in the city, blames the media for deliberately perpetuating the stereotype. “Yes, it is a little difficult to get men to protest against rape, but we have tried and succeeded in doing so. But it is the media which want to have images of women only,” he alleges.

However, the time is now for men to be more aggressive about cleaning their gender of taints like rape, and their image as brutes, says Harish Sadani, a rare male gender rights activist in the country. After all, men too want a violence-free society and therefore need to be a part of the solution too.

Sadani’s Mumbai-based organisation, Men Against Violence and Abuse (MAVA), for the last two decades, has been working with young boys and men in six districts of Maharashtra, using a series of workshops, discussions and other interactive exercises to help them first deconstruct their idea of masculinity and then reconstruct it. “Patriarchy in our country is 5000 years old. It is not correct to blame only today’s men; they will take time to change. But we have to see how much of thinking and ground work have gone into causing this change,” he states.

“Look at the way many parliamentarians behaved when Jaya Bachchan cried. MPs like Rajiv Shukla were laughing, half of them were missing — look at the attitude,” points out Ranjana Kumari. They too are a victim of patriarchy, says Sadani. “We need separate modules to address people, from different age groups, regions, police; one for parliamentarians is also required.”

No role models for men

Men-to-men talk helps, he underlines. And that is why right thinking men will have to come out. Because, unlike women in India today, there are hardly any role models for the Indian male. “There is no dearth of women in the country today who shine both at home and outside but where do we have such men? Take Sachin Tendulkar, he is a great cricketer, but how he treats his wife, what kind of family man he is, his fans don’t know. In the West, it is very different, look at Roger Federer, who after winning the Wimbledon title, said he was happy that his wife and twin daughters were watching him play. Such a thing from a well known person goes a long way.”

Make heroes out of change-makers

Also, making a hero of a change-maker is crucial. “Look at the case of those two Mumbai youths Reuben Fernandes and Keenan Santos who died trying to help a neighbourhood girl from ‘Eve-teasers’. Why can’t we make them role models? Celebrate them in the media? It took nine months in that case to file a charge-sheet. Soon after that, one boy asked me in a workshop in Mumbai, did he do the right thing?” In the Delhi gang-rape case too, the young man who tried to save the girl needs to be made a hero.

Sadani highlights a vital point here. To ponder and act upon. “We have always looked at the issue of women empowerment without keeping men in perspective. I would say, our women empowerment programmes have worked and that is why you now see so many women confident, working, thinking on their own. But in the process, we have left the men behind. The Government programmers, many women activists, never thought that it was important. Still, funders don’t see the link; I myself am a big sufferer of this attitude. So men are in the same old cocoon, unable to handle this change. They find women getting better jobs, having the same aspirational level which clearly is in conflict with what patriarchy tells them, that the world is theirs. So there are frequent conflicts, in homes and public spaces, some very violent ones.”

So we need to focus on helping men change, making them the part of the solution, “telling them, they are the problem, not the women.”

This brings us to how more and more men can play the role of facilitators. “Long ago, when I was growing up, I saw my father doing household chores, cutting vegetables. So I have a different image of a man in the house. Yes, he might have been looked at as a sissy by many and later me too for helping out in the house, but by then my conviction, that this is the right way to be, was complete. So I never bothered to follow the misconceptions of masculinity,” says Sadani, a Tata Institute of Fundamental Research alumnus.

He doesn’t like to call men perpetrators. “Else, you will have to call women perpetuators too.”

What is required is dialogue, with men, men to men, a missing component here. Will the street anger against the recent gang-rape fizzle out or will it help open a window for such a dialogue? One can only hope for better.